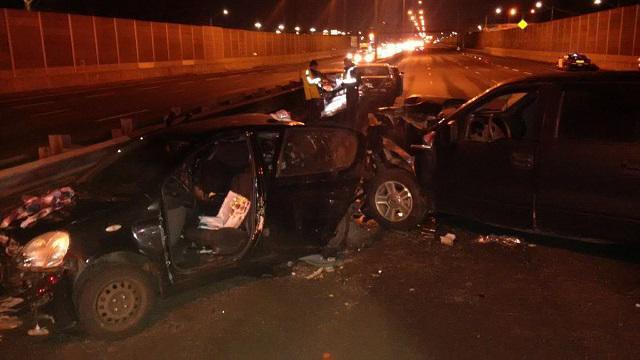 Police say an arrest has been made in connection with a suspected road rage incident that claimed the life of a 22-year-old Niagara Falls woman in Mississauga.

“There are significant developments to report in the investigation into the collision that claimed the life of 22-year-old Nicole Turcotte on Jan. 27,” says OPP Sgt. Kerry Schmidt.

“The investigators have made significant developments and I can tell you at this point that one arrest has been made. That person is in custody right now at the Port Credit detachment. That person will be held for a bail hearing later this morning.”

On Saturday, Jan. 27 at approximately 10:00 p.m., five vehicles were involved in a collision on the Toronto-bound QEW, just east of Cawthra Rd.

On Sunday, the OPP confirmed that Nicole Turcotte succumbed to her injuries at a Toronto trauma centre. A 19-year-old Niagara Falls woman was also seriously injured.

Schmidt said that, prior to the crash, a vehicle from the middle lane went in front of a line of vehicles in the left lane and began to slow down.

“For some reason, there was some interaction and that vehicle began to slow. The lead vehicle behind it slowed as well to avoid a collision, which triggered a multi-vehicle chain reaction that claimed the life of Nicole Turcotte,” says Schmidt.

Schmidt said that witnesses described the suspect vehicle doing what is commonly called a “brake check,” which occurs when a vehicle cuts in front of traffic and slows down. This move is typically done in anger to retaliate against some perceived slight.

Schmidt says more information about the arrest will be released later today.

“The arrest was made in large part from tips from the media and the public.”

Schmidt says charges are being laid at this time.