Are You Okay With Sexy Server Outfits in Mississauga? 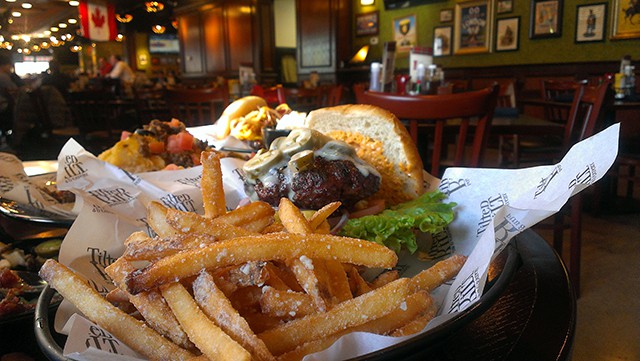 Last week, the Ontario Human Rights Commission (OHRC) called for an end to “sexualized dress codes that discriminate against female and transgender employees.”

“While International Women’s Day is an opportunity to celebrate the achievements of women, unequal treatment is still a daily challenge,” the call reads. “This treatment is often visible in bars, restaurants and other services that require women to dress in high heels, tight dresses, low-cut tops and short skirts.

These dress codes persist across the restaurant industry, despite human rights decisions that have found them to be discriminatory. They may make employees more vulnerable to sexual harassment, contribute to discriminatory work environments and exclude people based on sex, gender identity or expression and creed.”

The call — one that was spurred on by complaints filed by female employees who were opposed to sexier outfit expectations at bars and restaurants — was not terribly unexpected. Anyone who has dined in one of Mississauga’s many big box restos — namely Moxie’s, The Keg, Earl’s, Chop, Jack Astor’s or Bier Markt — has probably noticed that sexy outfits are de rigueur on female staff. While the body-hugging fabrics aren’t the problem, the expectations that all women workers wear them is.

“The OHRC has been working on this issue for many years,” the commission said in an email to the CBC. “The issues raised by servers in CBC Marketplace’s inquiry provided us an opportunity to restate our long-standing position on sexualized dress codes.”

After the call to stop requiring female servers to wear form-fitting and revealing outfits was made, some outcry followed. Myriad columnists decried the commission’s nanny-state overstepping that was, they argued, going to hurt businesses’ bottom lines in order to appease shrieking feminist interest groups who were more interested in making young, beautiful women look dowdy and unattractive than protecting the rights of workers.

To be clear, the OHRC is not about to ban skirts, dresses, cleavage and sexy servers. What they’re asking is that bars and restaurants refrain from requiring female employees to wear sexualized or revealing attire when the employee is not comfortable doing so. This call makes sense, mostly because a sexy dress code can be, by its very nature, exclusionary. If a sexy outfit is required, it follows that a conventionally attractive server be as well. Could this not affect servers who are older, larger, less conventionally beautiful or — as the OHRC calls out — transgender?

It’s one thing if a waitress at a casual dining establishment like Earl’s or Jack Astor’s or Moxie’s chooses to wear an alluring black mini-dress. It’s quite another to mandate that all female employees sport similar attire and deny them shifts if they prefer, say, more comfortable flat shoes or professional, well-fitted pants or a longer dress or skirt.

This call obviously does not extend to establishments who rely on a sexy aesthetic to stay afloat and relevant. Servers who work at Hooters and The Tilted Kilt probably won’t be fighting to exchange their hot outfits for power suits any time soon. That said, it’s hard to argue that sexy outfits are as necessary to the continued success of say, Mississauga’s many Moxie’s locations.

So while some might say that shyer foodservice employees should avoid applying for jobs at establishments that enforce a more risqué dress code, it’s not exactly fair to limit people’s options so severely — especially in a city so full of chain restos. It’s one thing to suggest someone avoid applying at The Tilted Kilt. It’s quite another to insist they avoid working at The Keg or Bier Markt when those establishments should be more focused on exceptional food and service rather than the titillation of customers.

So all in all, the call is fair. It doesn’t suggest that no female server can wear an alluring or form-fitting outfit (that would be equally as oppressive), but rather that people should be free to wear more modest attire (that’s still professional and in line with the establishment’s aesthetic, of course) if they choose to.

What do you think, Mississauga? Have you been affected by a difficult or restrictive dress code? Or do you think all bars and restaurants should be able to enforce risqué outfits if they believe it’s best for their business model?