Are These Mississauga Road Signs Racist? 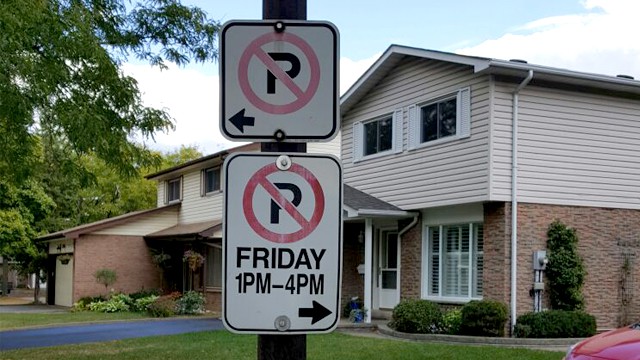 Let me be clear; I don’t go out of my way to pick on Pat Saito. To be honest, all I know about the ward 9 councillor from Meadowvale is her public record and that she is, for the most part, very pragmatic. But as I mentioned before, lately Councillor Saito has been making public policy decisions that seem to affect one particular community in ward 9.

First it was her sole vote against the refurbishment of the Meadowvale Mosque on Winston Churchill across from Meadowvale Town Centre (even after it went through all the proper procedures of the development application process), then it was voting against granting a parking exemption during the hours of Eid. What you might notice is that both those matters revolved around specific issues and now, once again, something has flared up regarding parking, the Muslim community and Pat Saito.

The pictures of these signs were posted by a local Muslim community activist in Mississauga named Aman Khan. For the record, Mr. Khan ran against Pat Saito in the 2014 municipal election for her council seat and was unsuccessful. As an aspiring public figure, his Facebook happens to open to the public and he recently posted this on his page:

Hey Guys, you will be surprised to see this sign, this happened couple years back but I thought to raise my voice…

So the pictures require an explanation. Apparently this NO PARKING sign was placed there around 2004, and Mr. Khan raised the matter due to the growing issues surrounding the Muslim community and what is sometimes termed as ‘reasonable accommodation’ for certain cultural communities. The sign basically says that between 1:00 p.m and 4:00 p.m. every single Friday, no one is allowed to park there. But here’s the thing; the sign is near the intersection of Cobbinshaw Circle and Montevideo Road and it just so happens that the Ar-Rehman Islamic Centre is located around the corner.

If you’re not familiar with the practices of Islamic faith, Muslims conduct their prayers on Friday afternoons, usually at a mosque (or an Islamic Centre where prayers can be conducted). For those gentlemen lucky enough to live nearby, parking isn’t an issue. But for those coming from work or elsewhere, it does get problematic (and people do see it as problematic, but perhaps in different ways).

There are several comments back and forth between various individuals regarding this particular Facebook post, including some from Councillor Saito herself. I would like to start off by quoting Peel District School Board Trustee Nokha Dakroub, who represents both Wards 9 and 10 on the school board:

‘I agree that the community needs to be more mindful when it comes to parking. There certainly isn’t an excuse for blocking streets and driveways and I think it’s important to work with the local community to ensure the safety and comfort of everyone. But when one level of government blatantly posts signs that specifically and very obviously target one community, this becomes less about parking and more about belonging. This sign might as well say “no prayers in Meadowvale.” And I represent Meadowvale as well, and believe me the vast majority of residents, would not want this divisiveness in their neighbourhood.”

‘I just want to add that bad driver behaviour and parking issues have been so closely linked with the Muslim community which I think is a bit unfair. Most calls I receive about parking and bad driver behaviour issues are in regards to parents from the larger community dropping off their kids in the morning at almost every school because they are in a rush. So the problem isn’t that “Muslims can’t park properly.” It’s that people in a rush can’t park properly. So maybe as a community we need to work on time management strategies when it comes to prayers.”

“They (the residents) signed a petition and over 80% of them asked for the sign. You can read the process on the city website. It was a number of years ago and is part of the usual process for amending a bylaw. It was requested by the people who live there and their voices count.

The councillor then went on say that Ms. Dakroub is not aware of what happened because she wasn’t involved in the discussions and that what people don’t know is that Councillor Saito worked with the mosque to get additional parking on Montevideo so they could worship (her words). She also said name calling and heated rhetoric got more attention than the actual facts.

“The signs were installed many years ago,” Saito said in an email to insauga.com “They were requested by the residents of Cobbinshaw who were being inconvenienced by people parking on their street blocking their driveways and creating safety concerns for their children and families. The city has a set process for amending the parking bylaw. It requires a petition from residents and if there is support the city does a survey of all who live on the street. We require at least 66 per cent of the respondents to support the change. If this happens, as it did in this case, the bylaw is approved by Council. As this impacted the members of the mosque which has almost no on site parking, I did sight inspections with staff to add as much parking on Montevideo as we could while maintaining safe access for motorists and pedestrians. This does not meet their needs and parking still occurs illegally but that is the result of a facility operating without the appropriate infrastructure.”

I would like to go back and address what Ms. Dakroub said about the stereotype that Muslims can’t properly park, and that this is more of an issue that all kinds of people can’t park property when they’re in a rush. This would pertain to parents taking their children to and from school and I have to tell you, I’ve heard this comparison before; school zones have designated periods where no parking is allowed in order to alleviate problems for people living adjacent to a school.

Is that fair? To compare Muslims praying at certain times to when school children get dropped off? I’m not an expert on traffic control or calming measures, but I do note that they both share a common denominator of at least disrupting the normal atmosphere of a quiet residential street. I guess what Councillor Saito has to grapple with every other day is: how does this request for parking impact the neighbourhood? How does this business’s request to install lighting here affect the neighbouring homes? How does one resident’s application to install a porch affect her neighbour across the way?

These are tough issues to contend with, and you have to hear from all sides and have the patience of Job in order to come to an amicable resolution. But in this case, these signs seem like they were erected as a quick fix to a long systemic problem. We think we live in this multicultural, tolerant society (which I think Mississauga for the most part is) but there are  tensions between established communities and cultural communities that are still being dealt with and have to be worked out. Insauga just wrote an article about an anti-racism summit in Mississauga. The province wouldn’t be hosting summits to combat racism if it wasn’t a problem.

As that great philosopher, Chris Rock, said in one of his infamous stand up routines when discussing people who seem genuinely surprised to encounter racism: “what ROCK have you been living under?”