Are Payday Loans A Problem in Mississauga? 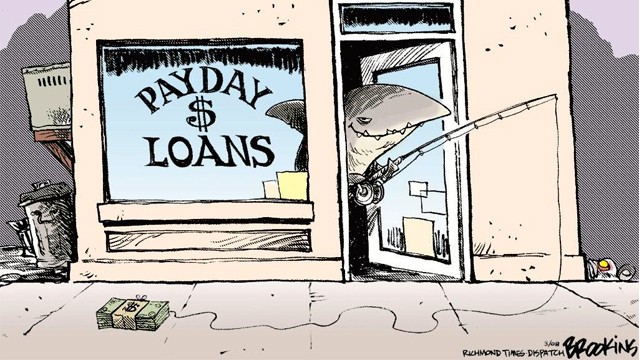 The blaring bright yellow signage is difficult to ignore when you see it while walking down the street. What the signs say is even more disturbing: “$300 now for $20!” or “Quick Cash Now” or “Cash Money Now.”

Some variation of that line of verbiage is familiar to anyone who knows anything about payday loan companies (otherwise known as predatory lenders in some circles). My own neighbourhood, Cooksville, has up to six or seven payday loan companies just around the intersection of Hurontario and Dundas alone.

What is the difference between payday loans and traditional banking? Payday lenders have more locations and longer hours than most banks. Some lenders are open 24 hours a day. And when was the last time you saw a bank open on Sunday?

However, it’s not all smiles and sunshine in the payday lending world. The payday loan industry by nature is for people who have money issues in their everyday life. People from the lower end of the income spectrum are the target market for payday loan companies. Honestly, from a business standpoint, how can you blame the companies?

It’s supply and demand; that’s why there aren’t that many payday loan companies at Bay and Bloor. But still, the target market is low income people and many don’t understand the intricacies of the business well enough to protest themselves (or worse, are new Canadians or immigrants). Hence the name, predatory lending, generally describes what type of business this is for opponents of the practice.

Although there are regulations and laws that prohibit such practices from being conducted, some companies slip through the cracks and continue the practice undetected. There are also issues with false advertising methods and unstable pay structures — suffice it to say that this is not an industry that really benefits the overall economy that much.

I bring this up because in the last municipal election, the local councillor for the Hurontario and Dundas area, Nando Iannicca of Ward 7, touched on the vitality of the economic activity of Cooksville during a televised debate on Rogers TV. When a question came up about Cooksville, Iannicca mentioned that the area is bustling with activity and is an incredible centre of ‘commence, jobs…’ basically selling the area as best as he could. He might be talking about the ethnically diverse food options in ward 7, but perhaps he was glossing over the downsides of his ward, the ones that are hidden in the shadows.

With all the payday loan places in the area, is that what Iannicca meant by commerce and jobs? These are more extractive businesses that rely on the gullibility of disadvantaged people, I don’t think this is the type of business any councillor should support.

I’m so glad that a friend of mine, Councillor Matthew Green from Hamilton, has taken a more active approach in regulating and licensing payday lenders. I don’t expect Mississauga to follow Hamilton’s way any time soon. But I wish that city council would look at these lenders objectively and study whether or not they are beneficial to the community.