A re-inactment of the Battle of Aquino is held each year at the Oshawa Regiment Museum in Oshawa. Photo by Glenn Hendry

Aquino, a small town in south central Italy and the sight of a bloody battle in the Second World War involving the Ontario Regiment of Oshawa, wants to strengthen the bonds between the two communities through a ‘twinship.’

Each year the regiment’s tank museum organizes the popular Aquino Days Tank Weekend that includes, among other attractions, a re-enactment of the battle, which took place over four days in the spring of 1944.

Aquino anchored the western end of the Hitler Line, a defensive line of obstacles and strong points which blocked the advance to Rome along the Liri Valley.

On May 19 the Ontario Regiment was tasked with supporting the British 26th Armoured Brigade, whose job was to sweep through Aquino and then hook behind the German Lines. The Oshawa boys were then to directly support the British 30th Infantry Brigade in exploiting the gap created by the 26th’s attack.

In the end every tank in the unit was hit at least once by anti tank fire. The regiment suffered five wounded and one missing in action. The regiment destroyed one German Tank, one Self-Propelled Gun, and several AT guns.

The Hitler Line was finally taken on May 23 by the first and second Canadian Infantry Brigade at a cost of 162 killed, 306 wounded and 75 taken prisoner. The 90th Panzer Grenadier Battalion and the 1st Parachute Division were practically wiped out.

The town, with a population of about 5,000, has welcomed veterans of that battle in the past and Aquino Mayor Libero Mazzaroppi said he is “grateful” for the attention given to the community each year by the regimental museum.

“We still remember the days we welcomed the Ontario Regiment veterans and Members of Ontario Regiments Association,” Mazzaroppi told Oshawa Council in a letter, adding that there is a “magnificent” monument dedicated to the young Canadians who “lost their lives in a historic battle that gave us freedom and democracy.”

Mazzaroppi said he hopes to “continue developing the bond” the Ontario Regiment initiated nearly 80 years before with the twinship project.

Oshawa currently has just one twinship, with Wiux Xinwu District in China, which has a population of 507,700.

The proposal was sent to staff for a report. 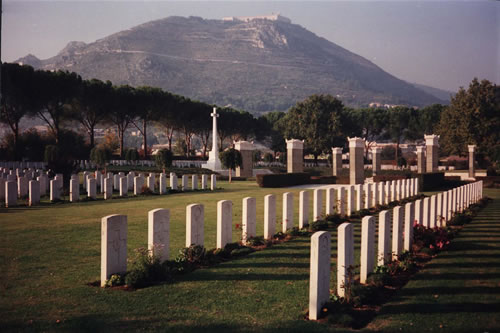 The Canadian War Memorial at Monte Cassino, just seven miles from the town of Aquino