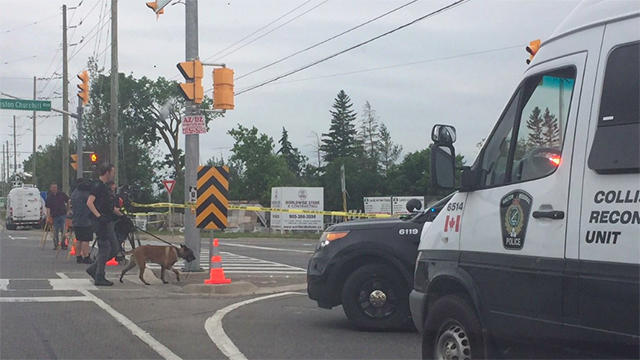 A 19-year-old Brampton man is facing charges in relation to a violent baseball bat attack in Halton Hills which injured three victims.

A 19-year-old Brampton man is facing charges in relation to a violent baseball bat attack in Halton Hills which injured three victims.

The man was handcuffed on Sept. 5, say Halton police.

But detectives allege their main suspect who “orchestrated the attack” has left Canada for India.

Rankirat Singh, 20, of Brampton, boarded a flight to New Delhi the day of the attack, say police, and remains at large.

An arrest warrant remains for Singh on two counts of aggravated assault and one count of assault with a weapon.

The June 20 beatdown began over a dispute involving a real estate transaction, say investigators, resulting in the assault with “sticks.”

All three victims are from the Brampton area.

Police allege one of the victims brokered a real estate deal between a Brampton property owner and the suspect last June, and the victim received a deposit from the suspect to lease the property.

The property owner declined the lease offer and asked the victim to return the deposit to the suspect.

Discussions between the victim and the suspect -regarding the declined offer- grew heated, say police, resulting in the victim fearing for his safety.

The victim and two friends travelled to a pre-arranged meeting area to return the deposit to the man shortly after midnight on June 20.

That’s when they saw several vehicles with numerous men -allegedly including the suspects- standing around carrying what appeared to be bats and sticks.

The trio tried to flee in their vehicle but were surrounded and beaten at a red light on Winston Churchill Blvd. and Steeles Ave. in Halton Hills.

Detectives conducted a search warrant at a Brampton home on June 21, seizing several sticks, a baton and two vehicles.

Mani Randhawa, of Brampton, is facing two counts of aggravated assault and one count of assault with a weapon.

Randhawa was held for a bail hearing.

Kinderbir Singh, 20, of Brampton, was arrested on June 28 and charged with two counts of aggravated assault and one count of assault with a weapon in relation to the case.

It’s unclear if the suspects are related.

Police are asking those involved to contact a lawyer or detectives and arrange for their safe surrender.

Anyone with information regarding this incident is asked to contact acting Det.-Const. Ian Lynn of the 1 District criminal investigations bureau at 905-825-4747 ext. 2422.
Tips can also be submitted to Crime Stoppers “See something? Hear something? Know something? Contact Crime Stoppers” at 1-800-222-8477 (TIPS) or through the web at www.haltoncrimestoppers.ca
Photo courtesy of Halton Regional Police
insauga's Editorial Standards and Policies