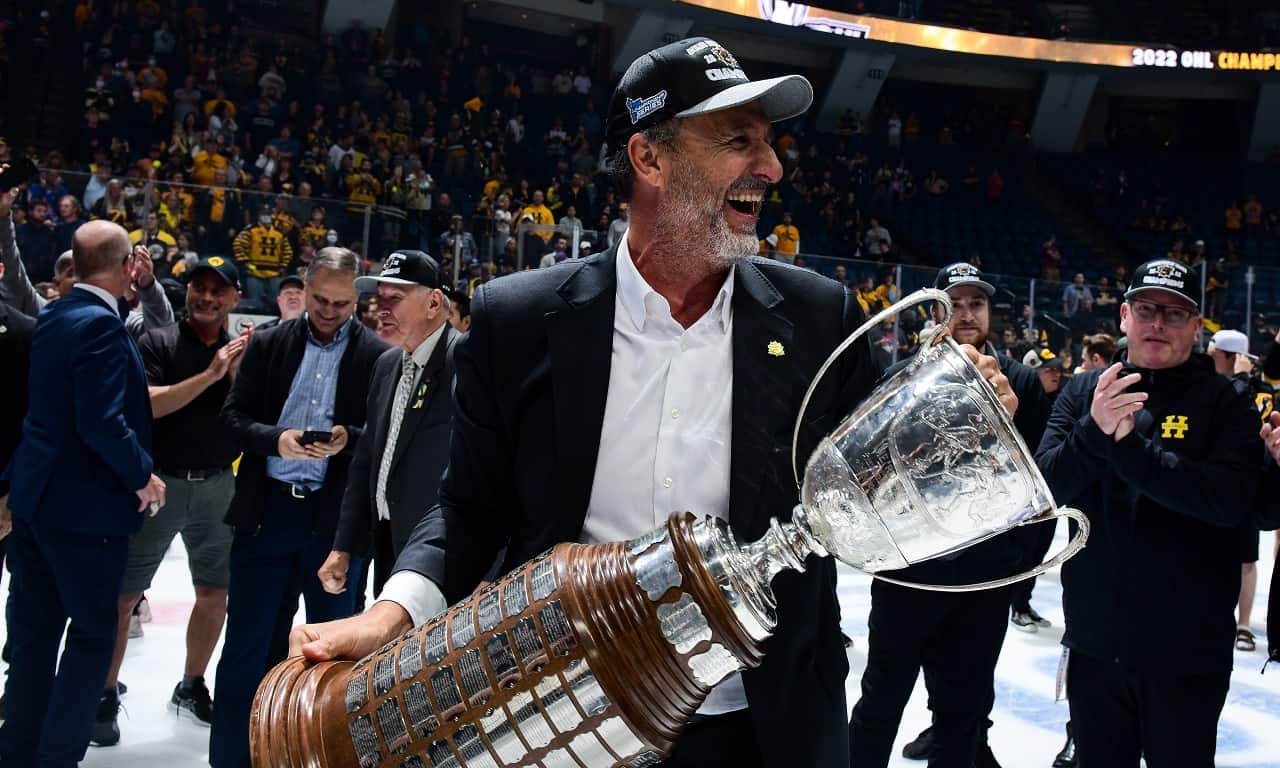 In Hamilton, you need need a program just to tell the real players — the ones with stakes in the local sports teams.

Multiple reports have indicated that billionaire pucks patron Michael Andlauer, who has been the principal investor in Hamilton’s one-step-below-The-Show teams in the American (AHL) and Ontario (OHL) leagues for 20 years, is a possible bidder for the Ottawa Senators. Reports in the Toronto Globe and Mail (and at Postmedia) called Andlauer an “early favourite” in a field of buyers that could also include the Ottawa Sports and Entertainment Group, as well as a group helmed by Canadian movie star Ryan Reynolds.

Sisters Anna and Olivia Melnyk have put the small-market Canadian NHL team on the market. Their father, Eugene Melnyk, who had owned the Sens since 2003, died in March. But a condition of the sale is that the Senators will remain in Ottawa, the G&M reported. There have also been years of discussion about a new arena being built in Ottawa that would be part of a major real-estate investment.

On Wednesday, Andlauer told the Hamilton Spectator that “nothing’s changing” with the Bulldogs, who have won two of the last three titles the OHL has awarded while not being on a pandemic pause.

Andlauer grew his eight-figures net worth as president and chief executive officer of the eponymous Andlauer Management Group Inc., which oversees logistics and transportation firms that handle shipping in the healthcare and fashion retail industries. He is also a minority partner in the Montréal Canadiens, whose AHL farm team was the Hamilton Bulldogs from 2002 to ’15. He sold the AHL franchise to the Canadiens in 2015 and bought the OHL Belleville Bulls, which were transferred to Hamilton and given the same canine moniker.

Ottawa has their AHL team close to home in Belleville, about 2½ hours away. (Keeping the AHL affiliate close is part of NHL salary-cap management.) The Belleville Senators’ arena lease there runs until 2027. That city became available after Andlauer bought the Bulls.

Andlauer has pitched the city on building new, OHL-suitable arena and nothing of that materialized. Instead, the city agreed last year to a privately funded master plan for a new “entertainment precinct” that would involve sprucing up FirstOntario Centre. The investors in that project are known as the Hamilton Urban Precinct Entertainment Group.

But coincidentally, Carmen’s Group CEO P.J. Mercanti one of the leaders of HUPEG, and is also a partner in the city’s local hardball collective, the Hamilton Cardinals of the Intercounty Baseball League. The news of Andlauer making a play for the Senators comes almost simultaneously with the hockey Bulldogs and baseball Cardinals forming “a strategic partnership.”

The Cardinals teased that puck-and-ball pact on their Instagram account, saying more will be revealed at a Bulldogs home game on Nov. 18. Also coinicdentally, the opponent that night is the Ottawa 67’s — who are owned by OSEG, another potential Senators bidder.

The lavish renos at FirstOntario Centre will displace its sports tenants. But it will presumably need them to keep the arena from being dark in between hosting concerts from popular acts such as Blackpink and Rod Wave, who had or have shows in Hamilton this month.

FirstOntario is oversized for the OHL, a pro-format developmental league for players ages 16 to 20 whose crowds typically range from 3,000 to 6,000 fans. That has hardly held back the Bulldogs from having on-ice success. The Bulldogs won the OHL title in their third season in the city in 2018.

In June, they won again, with an OHL final record crowd of 11,779 turning out for the clincher.

Being involved in an NHL franchise does not preclude also simultaneously being the controlling partner in an OHL team. Andlauer has had his stake in the Canadiens while also bankrolling the Bulldogs. Melnyk also owned the OHL team in Mississauga from 2007 to ’12 while also owning the Senators.

In Alberta, Calgary Sports and Entertainment (NHL Flames, AHL Wranglers, WHL Hitmen) and Oilers Entertainment Group (Edmonton Oilers, WHL Oil Kings, AHL Bakersfield Condors) both have AHL and Western league teams within the same corporate families. The Flames have all three based in the same city.

The Hamilton census metropolitan area of 785,184 is the ninth-largest in Canada, and the largest that has not had an NHL team in recent history.

Hockey-insider types generally believe that the seven NHL franchises in Canada are less than eager to have another competitor who command a slice of media rights deals and broadcasting territory. Hamilton is also in Toronto Maple Leafs territory. The current arena is just 66 km away from Scotiabank Arena in Toronto, and 106 km away from the Buffalo Sabres’ KeyBank Center home just across the Canada-U.S. border.

The last new/old Canadian city to rejoin the league, the Winnipeg Jets, are some 750 km from the nearest team, the Minnesota Wild. They are more than 1,300 km from Calgary, the nearest Canadian market.

Hamilton has been teased by the prospect of the NHL putting down roots more than once. Entrepreneuer Jim Balsillie, of BlackBerry fame, tried three times in the aughts and early ’10s to buy a U.S.-based team and move it to Hamilton — the Phoenix (now Arizona) Coyotes, Pittsburgh Penguins and Nashville Predators respectively.

In each case, NHL commissioner Gary Bettman found a buyer and the teams stayed put. In Arizona’s case, the NHL had to operate the Coyotes for four seasons, and they are now playing at 5,000-seat Mullett Arena, which has the smallest capacity in the NHL by a factor of three.

Québec (839,311), the nation’s seventh-largest CMA, has a NHL-ready arena in the seven-year-old Centre Vidéotron (capacity: 18,259). Its tenant, the Québec Remparts, are on the same rung of the hockey ladder as the Bulldogs. The Québec Nordiques existed from 1972 to ’95 before moving to Denver and becoming the Colorado Avalanche.

Winnipeg (834,678), which is the eighth-largest CMA, regained the Jets in 2011. The original Jets had moved to Arizona 15 years earlier. The Jets, Nordiques and Oilers all came into being through the World Hockey Association of the 1970s, an upstart league which eventually folded and had four teams accepted into the NHL as expansion entries in ’79.

Hamilton did not build an NHL-sized arena until the mid-’80s. Tim Hortons cofounder Ron Joyce also led a Hamilton bid for a team in 1990, during the round of expansion that birthed the Senators and Tampa Bay Lightning in 1992-93. At that time, the entry fee was US$50 million.

That works out to around US$110M today. Per the Globe & Mail, the going rate to buy the Senators franchise could be in the US$800-million range.