An Adorable Historic Love Story Happened Just Outside of Brampton 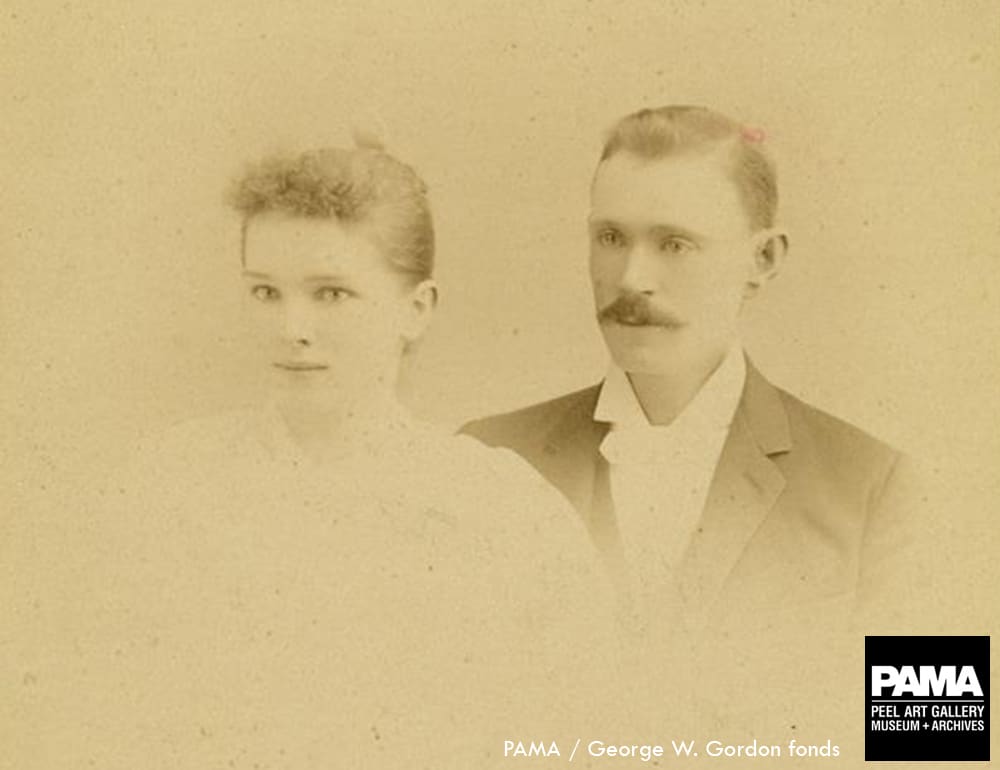 Beautiful bouquets are a tradition, but while Brampton is the Flower City, a few kilometers south in Port Credit in 1893, a young man cultivated two prosperous farms and penned poetry to win the he


Beautiful bouquets are a tradition, but while Brampton is the Flower City, a few kilometers south in Port Credit in 1893, a young man cultivated two prosperous farms and penned poetry to win the heart of his “bonnie maden fair” and he “vowed by all the saints most blest, She should [his] comfort share.”

George Wingfield Gordon would go on to be very active in the political and judicial life of Toronto Township (Mississauga) and Port Credit. His roles included Justice of the Peace, District Magistrate, deputy reeve, councillor, clerk and treasurer.

But alas, Cupid’s bow spares no one and the arrow that landed in the then farmer’s heart was Mary Ann “Minnie” Beamish, “With her eyes of blue, of azure hue, And bright and golden hair.”

I could not endure the suspense of not seeing you this week, so I took the liberty of scribbling a few words to you. I hope you will forgive me if I have overstepped the bounds of etiquette in not addressing you as Miss Beamish but really could not help it for I love you more than I can tell, now excuse me if I’m making a fool of myself but I am telling you only the truth when I say that there is not another girl in the world I like more than your own dear little self and there is nothing on his side of heaven would give me greater joy than to know that my affection was returned. Mary do you think you could love me? If you do than you can make me one of the happiest of men by becoming my dear little wife and I will do all that man can do to make you happy. But if you don’t – well Mary let the matter drop as it is and I will not trouble you any more about it but I shall always remember you as the little girl whom I love and I will cherish your memory in my heart. Give the matter your earnest consideration and I will not press you for an answer until you have fully made up your mind. My character thus far has been above reproach and I have tried to “provide things honourable in the sight of all men.” I told my aunt that a young lady friend of mine would be here for tea on Sunday evening so that you will be made very welcome. I will call around 1 oclock and we will drive down. I will not say any more for now Mary. You can understand my feelings towards you.

Good by and may heaven bless you.

P.S. Please excuse the familiar use I have made of your dear little name. Want you to drop the Mr. in mine and call me George.

She accepted his heartfelt written proposal and following their marriage in 1894 they went on to have six children.

Lillian, Rhena, Douglas, and Sandra continued the example set by their parents and in their role as teachers helped fill and guide many minds that grew the community from Port Credit to Toronto Township to modern Mississauga.

Son Francis also served, enlisting in the Canadian Expeditionary Force during World War I before settling down in Oregon. George and Minnie’s descendants lived in the homes built by their father for several decades.

Valentine’s Day fittingly falls in February, International Correspondence Writing Month, so hopefully these 19th century scribblings inspire you to detach from the digital era long enough to put pen to paper and ink out a new-fangled, old-school love letter.

You could also craft yourself a standout proposal by steering away from the flash mob and stage production varieties and taking a cue from George, pouring all your love for your intended onto a piece of paper. Who knows? It might end up as our 2038 Valentine’s story.

United States. In the early 1900s, a card company named Norcross became one of the first companies to manufacture Valentines. With the exception of Christmas, North American’s exchange more cards on Valentine’s Day than any other time of the year. Here are some cards from the PAMA museum collection.

And here are even more cards and postcards from PAMA’s collection! Pay close attention to the one about trousers…