Ambulances in Mississauga, Brampton face delays because of high volume of emergencies 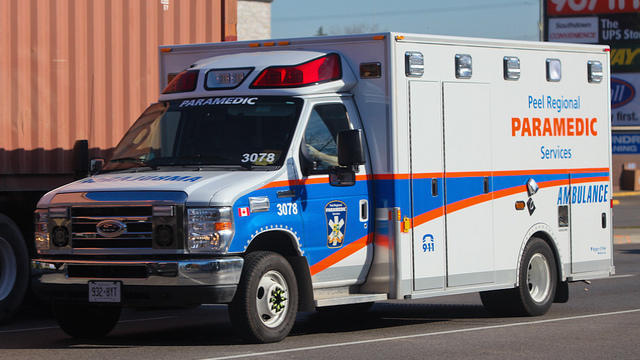 A steady increase in ambulance calls in Mississauga and Brampton, along with staff shortages at hospitals and among paramedics, is making it harder for Peel Paramedics to meet response time targets.

Despite the increased call volume, paramedics, together with other emergency responders, continue to make their target times for sudden cardiac arrest calls. Getting to these calls quickly increases the chance of the person’s survival. The call time is measured from the first notification to when a bystander, emergency responder or paramedic first applies the defibrillator to the patient. The target time is six minutes and in 2021, Peel was below that time at five minutes and 51 seconds.

However, response time for other calls were slower than the targets in 2021 and 2022. There are six categories of calls ranging from the most urgent — sudden cardiac arrest to non-urgent calls. 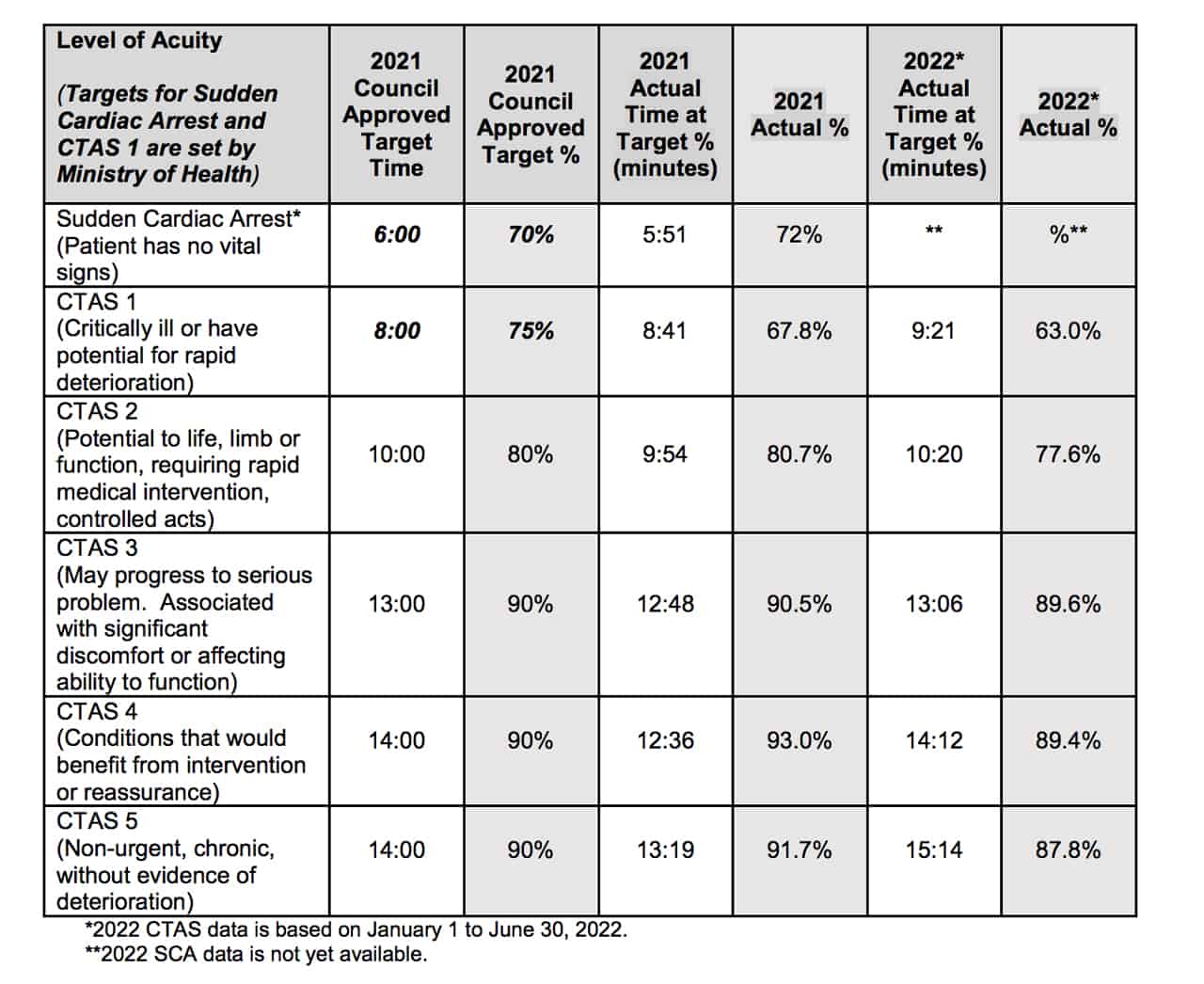 For the first category under cardiac arrests, calls to critically ill patients, the response time was 41 seconds over the target of eight minutes in 2021 and the 2022 data (January to June) shows one minute and 21 seconds over target.

The second category of calls, for patients requiring rapid medical intervention, the time was six seconds under the target of 10 minutes in 2021, but 20 seconds over target for the first half 0f 2022.

These two types of calls, along with sudden cardiac arrest calls, account for approximately 22 per cent of total transports to hospital.

The third category, calls for patients with a medical issue that could progress to serious problem, account for most transports to hospital (approximately 67 per cent). And paramedic services were six seconds over the target time of 13 minutes in the first half of 2022.

The last two categories, for less urgent issues, the response time is over the target of by 12 seconds and one minute and 14 seconds. These calls account for approximately 11 per cent of transports to hospital. 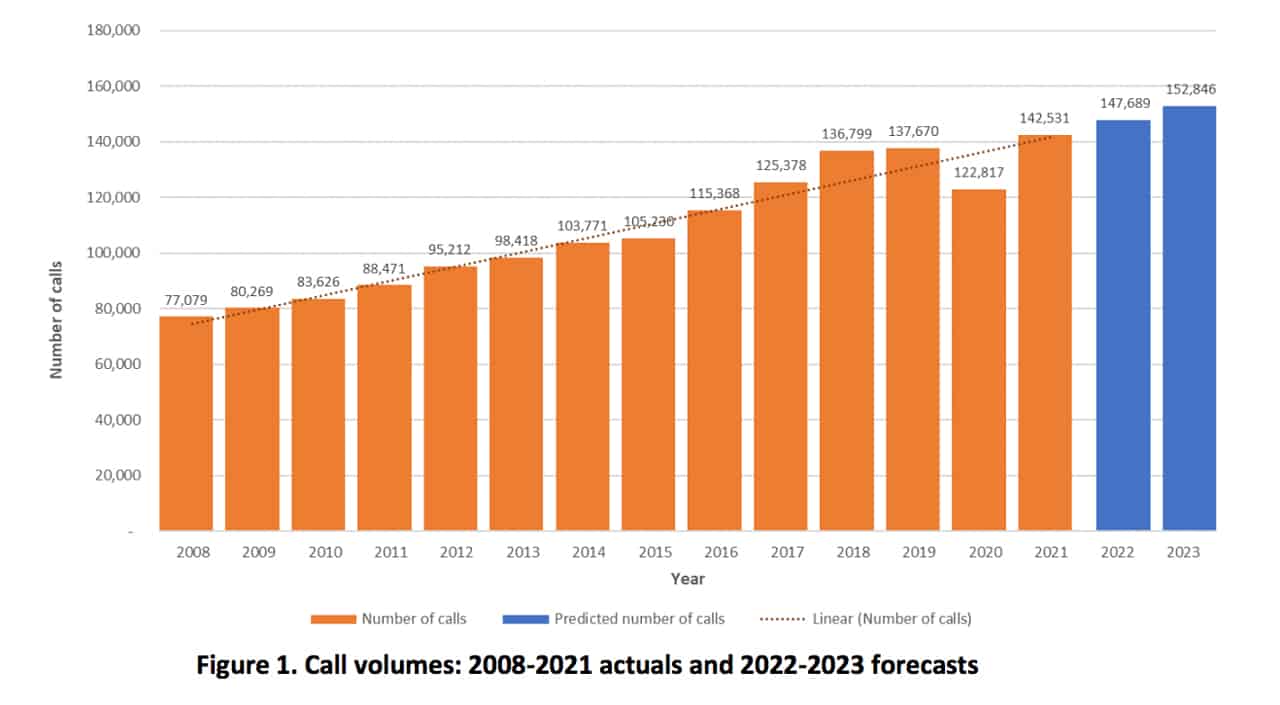 There are several reasons for the delays, according to the report.

The increasing call volume is a top factor. But there are also offload delays, meaning it is taking longer for paramedics to drop patients at the hospital. These delays are estimated to climb to 58,830 hours by the end of 2022 (22 per cent higher than 2021).

“Severe health human resourcing challenges at area hospitals directly impacts the ability of hospital staff to move patients from paramedics to the care of the hospital,” the report notes.

There is work being done with hospital partners to reduce these delays.

A third factor is staffing shortages in the health care sector, including Peel paramedics, due to the pandemic.

“Between the months of June 2021 to May 2022, the average number of unfilled shifts increased from seven per cent to 17 per cent, which is the equivalent of 18 ambulances off the road each day,” the report notes. “There was also a reluctance by staff to accept overtime shifts during this time, attributed to fatigue, adding to the challenge of filling shifts.”

If these labour pressures persist, there won’t be enough paramedics to staff ambulances currently and in the future. Peel Paramedics is working on strategies to recruit, engage, and retain this critical workforce.

Another factor includes the infection prevention and control measures for COVID-19.

Peel Paramedics are recommending the call time targets remain the same for 2023.