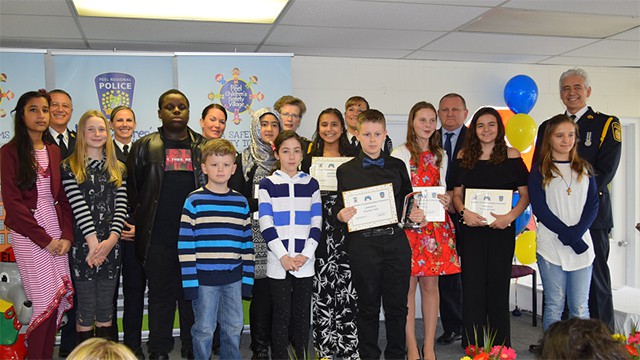 A Mississauga girl took it upon herself to come up with canned goods in time for Thanksgiving by waking up early on the weekend and going door-knocking.

Megan Watson and 10 other kids across Mississauga and Brampton were recognized at the 23rd annual Elmer Safety Recognition Awards at the Peel Children’s Safety Village on May 6.

Children were recognized for demonstrating initiative, good citizenship, and adherence to safety principles to make our community safer.

Here are the Mississauga winners:

Alexander has a neighbour who’s a senior citizen living on his own, and takes it upon himself to make sure that his driveway is shovelled throughout the winter. He also helps cut the grass in the summer and rake leaves in the fall. Alexander is often going out of his way to hold doors for people.

Megan came to the rescue at her school’s annual Thanksgiving Food Drive last fall. With one day left to go, she noticed a shortage in food donations and woke up early on Saturday morning, going door-to-door in her neighbourhood to collect canned goods. She received a very good response from her community, and on Monday delivered many boxes of food to her school. Not only did Megan make a huge contribution, the school extended the drive for another day, and her actions motivated her classmates to follow in her footsteps. Megan plans to continue this initiative going forward and make it annual drive.

Grace and Symone are being recognized for their kindness and good citizenship. In Grade 6, a new student arrived at the school diagnosed with ASD. He had trouble making friends at first, and wasn’t accepted by the kids in the class. Grace and Symone took care of this student, introducing him to new people, stayed by his side during recess, and helped him navigate the sometimes complicated Grade 6 social structure. Symone and Grace made sure this boy was invited to birthday parties and also phoned him at home to include him at out-of-school events.

Here are the Brampton winners:

Cierra is empathetic and a voice for those who don’t have the courage to speak up.  She is not a bystander, and in a sensitive issue that happened at school she chose to speak up to help others even though it may have caused her to lose friendships.

Mahnoor goes early to school every day to see if she can help out. She’s part of many extra-curricular activities, such as the social justice club where she helps with food drives. She’s also a “Beyond the Hurt” youth facilitator, trained by the Canadian Red Cross, and does presentations in her school about bullying and misuse of power.

Daniel intervened after receiving a social media post from a peer who said she was going to self-harm. He went to her house to check on her and when the peer said she had done something to harm herself, Daniel immediately phoned 911 and waited until first responders and the peer’s father arrived.

Samantha Falcone has been part of the bus safety patrol for four years and is known for her attention to detail, dedication to student safety, and leadership. The Grade 8 student even takes the time to adjust knapsacks and fix straps for younger kids. Samantha encouraged a group of kindergarten kids to put their artwork in their backpacks so they didn’t blow away. When asked why she did this, she said she didn’t want the kids to run after their work if it blew into the parking lot because they could get hit by a car.

Brianna is all about daily acts of kindness. She made friendship bracelets for her entire class because she didn’t want anyone to feel left out. Brianna bought another student a Pokemon binder after he took hers from her backpack. Although she was initially upset, Brianna figured perhaps he or his parents couldn’t afford one. So she asked her teacher about it and the binder was purchased.

Kainat supports her peers, especially those who are hurt, left out, or feel lonely. Kainat has a friend with a medical condition and supported her friend throughout Grades 5 and 6 by giving gifts while she was in hospital and staying in with her during break time if she was unable to go outside. She assists her classmates, friends and teachers without being asked.

Brody was sitting with his mom in their vehicle when he noticed a group of three men putting on balaclavas and gloves. Brody alerted his mom by saying “bad guys.” Brody’s mom witnessed the actions and contacted 911. As a result of their quick actions, all three suspects were arrested before they could rob a store.

The awards are sponsored by Alectra Utilities, Peel Police Services Board, Ontario Clean Water Agency, and the Kiwanis Club of Brampton.