Alleging racism, 10 Hamilton newly-elected representatives will not speak to ‘paper of record’ 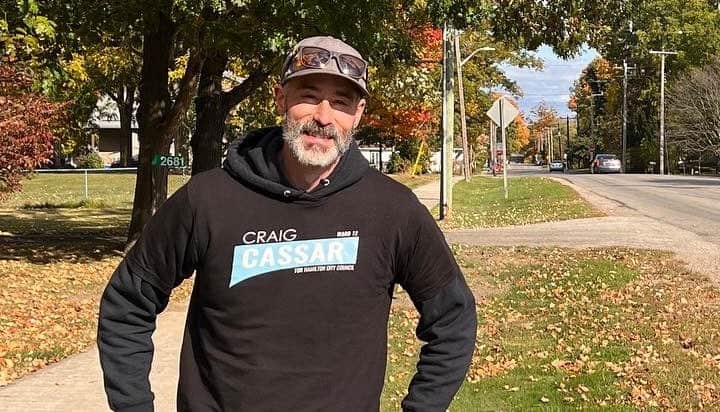 Over one-quarter of the political candidates who were elected as councillors or public school trustees are vowing not to speak to the oldest media outlet in Hamilton.

They say recent coverage, just days before the municipal election, perpetuated harm to Hamilton’s Black and racialized communities and may have been a factor in two Ward 14 races.

Today (Oct. 27), 13 candidates — five councillors-elect, five Hamilton-Wentworth District School Board trustees-elect and three others who ran in Ward 6 — signed on to an open letter explaining they are “refusing” to talk to the Hamilton Spectator. They say the newspaper’s headline on an article regarding the recent arrest of a Black man in connection with a home invasion last year was “weaponized” against council hopeful Kojo Damptey and HWDSB trustee candidate Ahona Medhi “in the final days” before election day on Monday.

Damptey finished second to Coun.-elect Mike Spadafora by 79 votes and has requested a recount.

The elected reps’ letter says this will stand until the newspaper “takes steps to acknowledge the harm it has caused, apologizes to those impacted and comes up with an action plan.” With 10 signing on, that is more than one-fourth of the 35 people elected on Monday. (The Hamilton-area English Catholic and French public boards each had an acclamation.)

Re-elected Ward 3 Coun. Nrinder Nann and councillors-elect Craig Cassar (Ward 12), Tammy Hwang (4), Cameron Kroetsch (2) and Alex Wilson (13) are signatories to the open letter. The headline that they and trustees-to-be Sabreina Dahab (Ward 2), Maria Felix Miller (3), Graeme Noble (15), Paul Tut (13) and Todd White (5) objected to was published on Oct. 20, four days before residents went to the polls. It was also retweeted on Oct. 23, the day before voting.

The Spectator sent a statement to at least one other media outlet saying it believes “the information in the article (in question) is both accurate and relevant.”

Coverage of the arrest of Samson Dekamo, who is facing a kidnapping charge in connection with a violent (and fatal) home invasion in September, was headlined, “Hamilton community organizer alleged to have helped kidnappers escape in fatal Glanbrook home invasion,” on Oct. 20. The first sentence, which was not behind a paywall, described Dekamo as having “called for the defunding of police.” The third paragraph stated he had “previously worked” with the Hamilton Centre for Civic Inclusion (HCCI) — of which Damptey is a former executive director — and the anti-oppression organization, Hamilton Students for Justice.

“During my campaign, I made it clear that I’m an ally for marginalized members of our community,” Cassar, the incoming Ancaster representative, wrote in a social media post. “These are not empty words. As an elected member of City Council, the bar of accountability has been raised.”

During my campaign, I made it clear that I’m an ally for marginalized members of our community. These are not empty words. As an elected member of City Council, the bar of accountability has been raised. I take this responsibility seriously. @TheSpec Please see attached statement pic.twitter.com/7q1Yhop8SL

Wilson, who was the only council candidate to get more than 7,000 votes on Monday on their way to becoming the councillor for Dundas, said they were proud to be “signing on to this open letter.”

I am proud to stand with 13 other councillor-elects, trustee-elects, council candidates and trustee candidates in signing on to this open letter calling for @TheSpec to make amends for their anti-Black racism. pic.twitter.com/KYd33qIsvi

‘Framed in a way that contributes to anti-Black racism’

The open letter does not appear to dispute the facts that were reported. Rather, the 13 signatories say the coverage was “framed in a way that contributes to anti-Black racism.” The letter also notes this came after there was widespread coverage of one of Damptey’s campaign advertisements being vandalized with a white supremacist sticker.

“We are issuing this statement today because, as candidates and elected officials, we feel it is our responsibility to ensure the media in our city acts with accountability,” reads a passage on the second page of the letter. “Our public commitments to protecting Black and racialized people in this city necessitate an honest and meaningful conversation about the ways institutions in Hamilton perpetuate and cause harm.

“The publication of this article is reflective of a journalistic practice that has perpetuated anti-Black racism in reporting and must be addressed,” it adds. “For many years, that culture has had material impacts on Black and racialized candidates, elected officials, and residents across the city of Hamilton. This isn’t new.”

Environment Hamilton also said it has had members who were arrested, and their connections to the climate group, present or past, were not mentioned in media coverage.

“This is how it ought to be — as we had no involvement with these actions,” an Environment Hamilton Twitter thread reads. “It would be even more unacceptable for us to be affiliated with something an individual has done that has nothing to do with us or politics at all.”

For the record there have been instances of individuals who had affiliation with Environment Hamilton being arrested for explicitly political acts of civil disobedience and protest – and not once has their affiliation with us as an organization been reported on by #HamOnt media.

Damptey was front and centre in June 2020 when there were Black Lives Matter demonstrations in Hamilton following the police murder of George Floyd in Minneapolis. In July, he was a part of a call for Hamilton to adopt “a systemic process of police accountability” after a study showed racialized residents are overrepresented by 200 per cent in police use-of-force incidents.

Chris Slye and Stefan Spolnik, who both ran for council in Ward 6, and Jayoni Edington, who ran for HWDSB wards 6/9 trustee, also signed the letter. The two-page missive mentions another article “that described non-incumbent candidates in the municipal election as ‘barbarians at the gate.’ ”

The U.S. National Library of Medicine (NLM) says that phrase was “used by the Romans to describe foreign attacks against their empire.” The NLM adds, “(It) is often used in contemporary English within a sarcastic, or ironic context, when speaking about a perceived threat from a rival group of people, often deemed to be less capable or somehow ‘primitive.’ ”

A unique internet search finds that phrase was attributed to former Hamilton mayor and political commentator Larry DiIanni in the Spectator on May 13. The article focused on then-Ward 14 councillor Terry Whitehead and his determination to fight through health issues to seek re-election, which he ultimately opted against.

Damptey had officially filed nomination papers in Ward 14 a week and a half earlier, on May 2.

“I am running to represent all residents of Ward 14 to create a Hamilton that looks out for every resident regardless of geography, gender, sexuality, income, status, or age,” Damptey, who moved to Hamilton from Ghana with his parents as a teenager, stated at that time.

Mehdi also filed to run for HWDSB wards 8/14 trustee that same day. She finished second in the race on Monday, 11 points behind the re-elected Becky Buck.

The new council, helmed by Mayor-elect Andrea Horwath, is slated to be sworn in on Nov. 15.