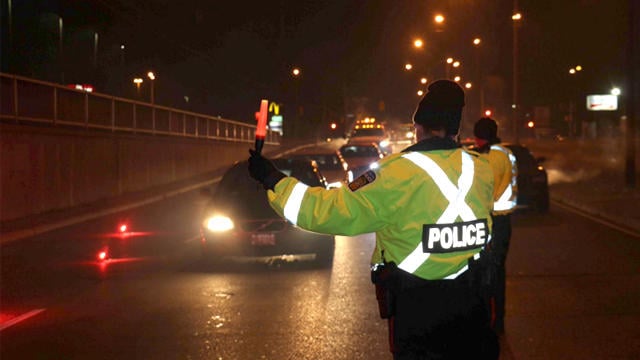 The purpose of the campaign — which began on November 19 and will continue until January 2, 2017 — is to make the community safer by catching and removing drivers who are under the influence of drugs or alcohol.

While police regularly conduct R.I.D.E. checks throughout the rest of the year, the annual festive campaign is an increased effort meant to combat the higher number of incidents that tend to occur around Christmas/New Year’s.

According to Peel Regional Police, 2016 has seen its fair share of DUI offences, with police tackling a total of 1,714 impaired driving cases in Peel from January to the end of November. On a larger scale, Ontario Provincial Police reports that 35 people have tragically died this year due to alcohol/drug-related crashes on OPP-patrolled roads.

As of this weekend, the OPP have laid 345 impaired driving charges on OPP patrolled roads.

In terms of Peel, there have been two high-profile crashes. As recently as today (Dec. 5), a man was arrested for impaired driving after going through a roadblock at Hwy 50 and Cottrelle in Brampton while Peel police were investigating a fatal collision that occurred in the area that morning.

Recently, a possibly impaired man crashed his car in the parking lot of the Port Credit OPP office in Mississauga and blamed his GPS.

According to Peel police, 18 drivers were arrested for impaired driving this past weekend alone and 11 were given warnings and had their licenses and vehicles seized.

“One of the leading causes of criminal death in Canada is impaired driving,” said Inspector Paul Pogue of Peel Road Safety Services. “Those that choose to drive while impaired are selfishly putting their own lives and those of other innocent road users at risk, it is simply unacceptable. This holiday season make the right choice and plan ahead.”

Police have also said they will be making an effort to publicly release the name of every individual who is arrested and charged with a drinking and driving related offence during the Festive R.I.D.E. campaign.

Stay safe on the road and enjoy the holidays, Mississauga!