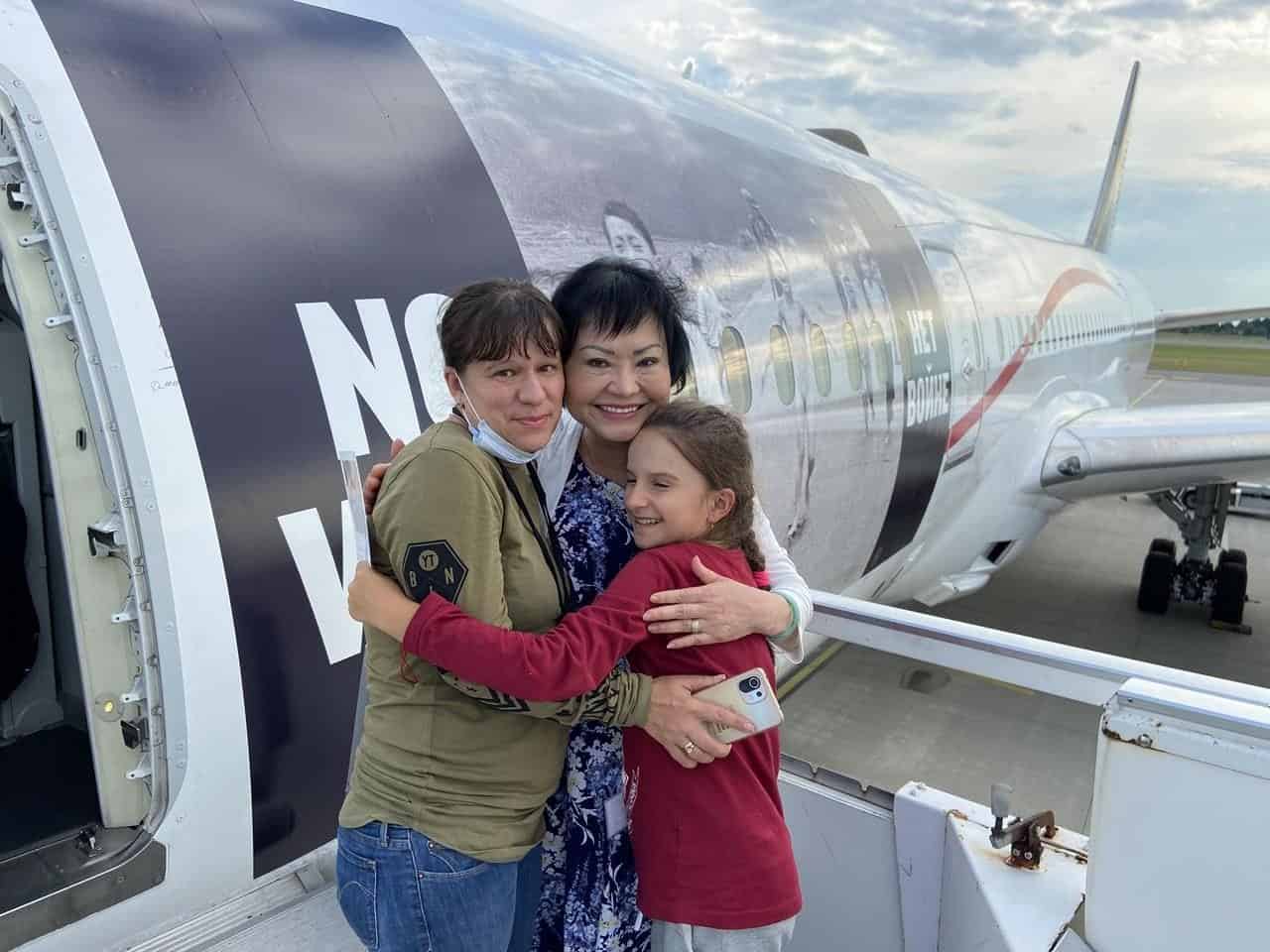 Tears streamed down Kim Phuc Phan Thi’s face as she stood at the entrance to a plane set to carry Ukrainian newcomers from Poland to Canada last month.

The aircraft was emblazoned with a famous black and white photo of Phan Thi as a nine-year-old child – an image that made her known as the “napalm girl” – showing her naked, screaming and fleeing an attack during the Vietnam War.

Fifty years after that photograph was taken, Phan Thi found herself drawn to helping Ukrainians escape the war in their country for the safe haven of Canada, just as she had done decades ago.

“I just remembered what’s happening to them now … I have been there. I understand what they need,” she said in an interview from her home in Ajax, Ont.

“I’m so thankful to be alive and to be there for them, give them hope.”

Phan Thi, who years ago founded an organization aimed at helping children affected by war, is currently working to support Ukrainian newcomers and hopes to go on more flights similar to the one she was on last month.

She first became involved with last month’s effort after receiving an email from a social justice organization seeking permission to use the famous photograph of her as a child on the outside of their plane.

Enrique Pineyro, a pilot and founder of the organization, Solidaire, planned to fly that plane from Warsaw to Regina with more than 200 Ukrainians on board.

“I said, ‘Wow, that is so wonderful. We can work together,'” said Phan Thi. “Because that is the impact of my picture, even 50 years (later), right?”

Phan Thi, 59, said she gave permission for her photograph to be used and asked if she could join the trip, a request Pineyro quickly agreed to.

The trip required some careful planning, however, to ensure Phan Thi would be able to travel.

She had been getting laser treatments in Miami to repair some of the skin damage she suffered from the napalm, a gel-like substance that easily explodes and ignites upon impact with a target. Her 12th laser round was scheduled for just days before she’d have to leave for Warsaw.

“I had to ask my doctor, ‘Don’t do (the treatment) so strong,'” said Phan Thi, who was eager to speed the healing time. “Because if she treated me very deep or strong, I’d have to be home for two months.”

Phan Thi said altering the treatment was worth it for the experience of welcoming the 236 Ukrainians who boarded the flight.

“I just stayed right side by side with my picture in the big airplane. And they go up the stairs, and I was there at the door welcoming them,” she recalled.

“I just thought in (that) moment, yes, 50 years ago, I was in the wrong place at the wrong time. But right now, I’m in the right time and the right place, to be there, to give those people hope.”

Phan Thi, who still experiences pain from the burns she sustained on the day of the napalm attack in 1972, has vivid memories of what was captured in the famous photograph.

She was playing outside near a bomb shelter with other children after lunchtime when a soldier suddenly yelled for them to run.

“I saw the airplane, just was so fast, so close and so loud,” she said.

“I just stayed right there. I was a child, I should run, right? But I didn’t. I just stood right there. Then I turned my head, I saw the airplane. And then I saw four bombs, landing.”

A series of booms thundered overhead and flames erupted, she recalled.

“The fire was everywhere around me. And of course my clothes burned all by fire. And I saw the fire over my arm,” she said, recalling scorching her right hand after trying to wipe off the napalm from her left arm.

At one point, she became tired and cried out, “Too hot! Too hot!” She remembers a soldier gave her some water to drink.

“He tried to help me, he poured the water over me,” she said. “I lost consciousness. I didn’t remember anything else.”

Her relationship with the Pulitzer Prize-winning photo, taken by Associated Press photographer Nick Ut, has changed over the years. As a young child, Phan Thi said, she hated the image, and as a young woman she resented the publicity it was throwing her way.

But her opinion changed after she moved to Canada in 1992 and became a mother.

“I never (wanted) my baby to suffer like that little girl, like myself when I was a child,” she said. “That picture is really a big impact in my life, and I consider that picture as a powerful gift for me to do something while I’m still alive.”

Phan Thi is a UNESCO Goodwill Ambassador and has spent years travelling around the world giving lectures and sharing her story. She also founded the Kim Foundation International to support children affected by war.

Since the pandemic hit, she’s divided her time between caring for her aging mother, who has dementia, and trying to help her brother in Vietnam get a visa to visit Canada to fulfil her mother’s wish to see him.

With the arrival of Ukrainians in Canada, Phan Thi hopes to do more to support newcomers by sharing lessons she learned over the years.

“I learned how to live with love, with hope and forgiveness,” she said. “We have to work towards peace.”

This report by The Canadian Press was first published Aug. 3, 2022.