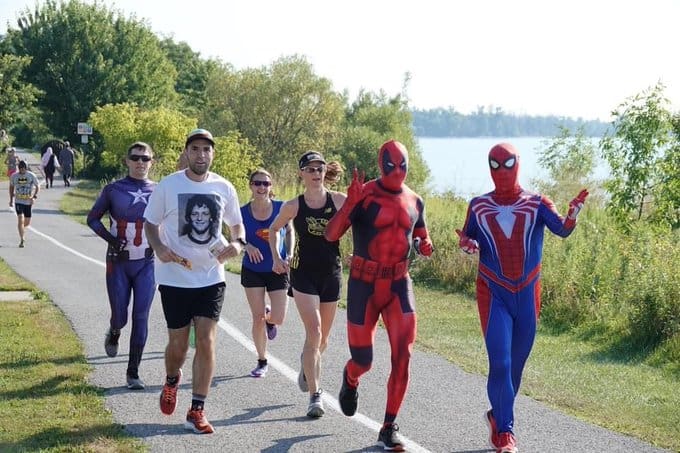 Ajax’s very own Avenger started running less than a decade ago in memory of his best friend Greg and his father Gordon, both of whom were victims of cancer. A few years later he donned a Spider-Man costume for the first time and the rest, as they probably say in Kevin Fiege’s office, is superhero history.

The Ajax Spider-Man, AKA Wayne Young, now runs in support of cancer research and has assembled a team of other superheroes with a goal of running 5,373 kilometres – the distance Terry Fox ran in 1980 before cancer returned and forced him to stop – over 28 days in the hopes of raising $53,730 for the Terry Fox Foundation.

Though he had run in a couple of marathons previously wearing the costume, it didn’t become part of his daily running routine until 2020 after the pandemic was declared. 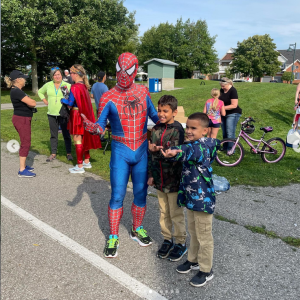 “I began running in a Spider-Man outfit to cheer kids up that were stuck inside doing virtual school,” he explained. “When I first started running in the suit it was to bring some joy to the people stuck at home. That was early in the pandemic, I also thought if I could run 20-plus kilometres in that suit and mask then anyone could wear a mask for a few minutes to shop.”

During the past three years of running Young has assembled an entourage of runners of all ages and skill levels who run with him on his daily jogs. There is a core group of about 22 who run together on the weekends and as many as 43 runners have shown up at one time – many in a superhero costume of their own.

Young brought them into the fundraising project this year, both to spread the load out and as a way of generating more money for the Terry Fox campaign, and because his wife told him to.

“Last year running 42 kilometres twenty-eight days straight was very taxing on my body and my wife said don’t do it again,” Young said with a laugh. “For six weeks I was pretty much exhausted and no good around the house. That’s fair, I told her.”

The group is running about 280 kilometres a day as a collective and Young said the campaign, which began a couple of weekends ago and culminates on the Terry Fox Run day September 18, is going very well so far.

“We’re on track. On weekends we get a lot of runners out,” he said. “Weekdays not so much with more people back at the office.”

Along the way Young has served as an inspiration to many people, especially children, who see him running in his Spider-Man costume and want to emulate their comic-book hero.

“One little fellow – he’s about six – saw me training and asked his father to buy him a Spider-Man costume. Now he runs on the Waterfront Trail every weekend.” 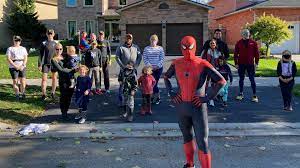 Young says about eight of his core group of runners do it in costume “I’m working on the rest,” he says, with a Thor, a Captain America and a couple of other Spider-Men to go with Batman, Superman and even a pandemic superhero – a runner wearing a nurse’s outfit.

Not everyone is comfortable wearing a costume, but the decision was easy for Young, a former mascot for the Toronto Marlies, the Belleville Bulls and the Tallahassee Tiger Sharks who is “no stranger” to dressing-up in costumes. “As a kid, I loved comics and Spider-Man always stuck out to me as an interesting hero who fought for the little people.”

Young’s first goal when he started running marathons was the Boston Marathon and he came so close in 2017, 2018 and 2019, making the qualifying time only to be cut each year. Finally, he made the cut for the prestigious race in 2020 which was, of course, cancelled due to the COVID-19 pandemic.

His running priorities have shifted since then – “my focus is charity work now” – but he hasn’t given up the dream either. “I definitely still want to get to Boston.”

He’s entered in a couple of upcoming qualifying marathons (The County Marathon October 2 in Picton and Mississauga in March), so the dream is still alive. But right now his focus is on raising money for the Terry Fox Foundation and there are still two weeks of daily runs to go before the big day.

“Terry Fox is such an inspiration that everyone can make a difference, you just have to try,” he said. “It’s not it what you do for yourself, but how you can make your community a better place.”

Spider-Man and his team of superheroes run every Saturday at 9 a.m. from Caruthers Marsh Pavilion until September 17. All are welcome to join them for runs or cheer them on if you see them running by. 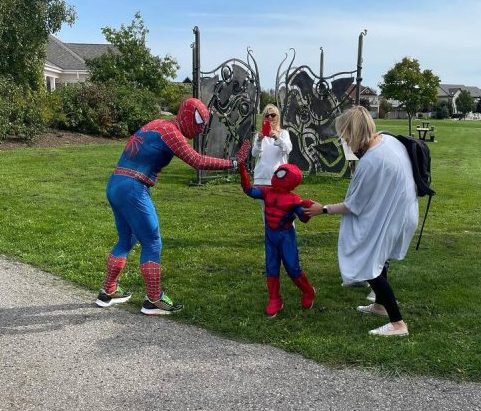