After more than a dozen Sovereign Media Award nominations and four wins in the books for Brampton horse racing writer Jennifer Morrison, she could be excused if her excitement level wasn’t at around-the-final-turn-headed-for-home levels.

But this one. This nomination was special.

Morrison, the TV Host and media promotions extraordinaire for the Ajax Downs racetrack and a mainstay at both Ajax and Woodbine tracks, has spent more 30 years handicapping and writing about the sport of Kings for the Daily Racing Form, Canadian Thoroughbred Magazine, and some of the biggest legacy newspapers. She’s won three Sovereign Awards for her writing and shared a fourth for best television broadcast.

This nomination is for her first book, however, a passion project about a horse and an ownership team near and dear to her heart: Run With a Mighty Heart. It’s the story of a one-eyed wonder horse who ‘rescued’ owner Larry Cordes of Uxbridge – who had faced a series of personal tragedies that almost caused him to quit the sport – and galvanized a nation trapped in the first year of a global pandemic when he captured the 2020 Queen’s Plate.

“I am very proud that my first book has earned a Sovereign nomination. It was a mighty task,” she said with a smile, “and a lot harder than I thought. But it was such an incredible story that was coming together despite a very scary world pandemic. I just want everyone to read his story and fall in love with horse racing. “ 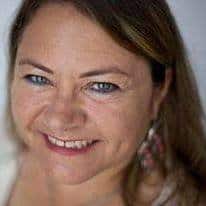 Morrison is up against Hayley Morrison (no relation) – New Races, New Faces: How I fell for the Fort; Susan Stafford-Pooley – The View (and some tales) from the Starting Gate; and Curtis Stock – Real Grace’s Winning Ways an Inspiration for Brown to Keep Fighting Terminal Diagnosis.

In the racing categories, Mighty Heart, the defending Horse of the year, is up again for that prize, as well for Champion male Older Horse. His trainer Josie Carrol is nominated for Trainer of the Year and jockey Patrick Husbands, who rode Mighty Heart to victory in November’s Autumn Stakes at Woodbine, is up for Jockey of the Year.

The 47th Annual Sovereign Awards, presented by the Jockey Club of Canada, will be held April 14 in Vaughan.