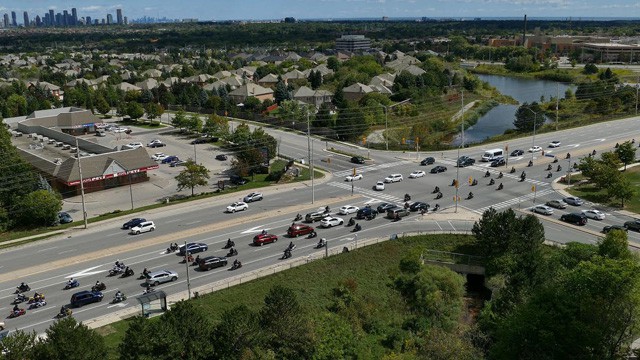 This past weekend, residents were alarmed by a group of hundreds of motorcyclists driving aggressively in the city.

On Sunday, Peel police received multiple calls about a group of somewhere between 100 and 400 bikers driving wildly on residential streets. The bikes were seen popping wheelies, weaving in and out of traffic, running red lights and generally driving dangerously and disruptively.

You can see a video, courtesy of Pascal Marchand, here.

“We received up to 20 calls in a short period of time,” says Constable Bally Saini.

At one point, there was a collision that left a bike smoldering on the street in the Cedar Glen Gate and Dundas area.

“When we got there, one of the motorcycles had caught fire,” says Saini. “The driver got on another bike and fled the scene. We’ve seized the motorcycle to be able to identify the owner or the driver.”

While the event certainly dominated the streets — and the news cycle — for some time on Sunday, there haven’t been any major developments just yet.

“Right now, we’re still investigating,” says Saini. “We are looking into videos that have been uploaded and shared directly with us. We’re investigating who might have organized this ride and we ask that anyone with video that could identify drivers or license plates to forward material to police.”

Since the case is still ongoing, the police are advising the public to be cautious.

“If the public encounters this again, we are asking them to keep safety in mind and don’t get involved. Basically, get a description of the license plate and driver and contact police to let them handle it.”

No groups or individuals involved in the incident have been identified yet.