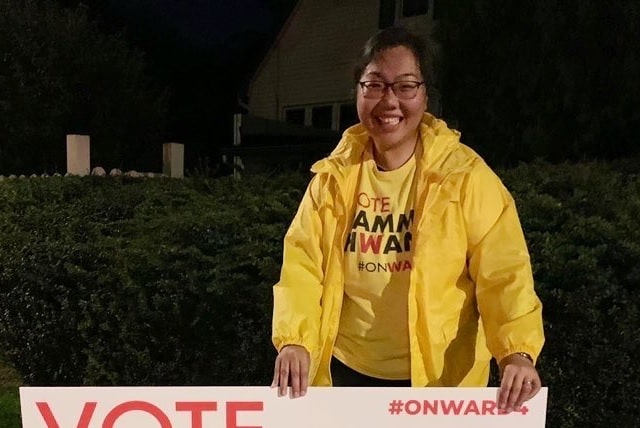 Content advisory: this article discusses instances of racism and systemic racism that may be distressing. Resources are listed at the end.

City councillors, school trustees and fellow candidates in Hamilton say they have a satisfactory outcome after talking with the city’s oldest media outlet about an article they said was “weaponized” in the final days of municipal election campaigning.

Three days after the election, Couns. Cameron Kroetsch (2), Nrinder Nann (3), Tammy Hwang (4), Craig Cassar (Ward 12) and Alex Wilson (13) signed on to the open letter to the Hamilton Spectator. The letter asserted that the newspaper’s headline on an article regarding the recent arrest of Black man in connection with a 2021 home invasion was linked, unfairly, to Ward 14 council hopeful Kojo Damptey — who finished second to Coun. Mike Spadafora by 79 notes — and public school board candidate Ahona Medhi. The article was published four days before the election, and was shared on the Spectator’s Twitter account on the eve of the election.

The letter referred to the newspaper, which first published in 1846, as the “paper of record.”

On Wednesday (Nov. 30), Coun. Hwang shared a statement outlining that a meeting was held with the Spectator and Metroland Media (its corporate division) three weeks ago. They said councillors “will decide” how to speak with the newspaper and the outlet committed to reviewing its social media use and updating its anti-racism and media bias training.

“On Thursday, November 10, we met with management at The Hamilton Spectator and Metroland Media to discuss our October 27 letter.

“As a result of the discussion, the Spectator has committed to reviewing its social media reporting practices, including how it frames its reporting in social media spaces, and will include the reporting that prompted our letter in its anti-racism and media bias training.

“We’re glad that we have been able to engage with the Spectator around this important discussion and we hope that all local newsrooms will reflect on and commit to challenging anti-Black racism in their reporting.

“As individuals, we will decide how to communicate with the Spectator moving forward.

“We look forward to fulfilling our roles, mandates, and responsibilities as councillors, trustees, and community members. We’re committed to continuing to work together to address this issue across our city.”

Five trustees with the Hamilton-Wentworth District School Board — vice-chair Maria Felix Miller (Ward 3), Sabreina Dahab (2), Todd White (5 & 10), Paul Tut (13) and Graeme Noble (15) — signed the Oct. 27 letter and the follow-up on Wednesday. Mehdi was one of four other council and trustee candidates who signed.

Damptey and Mehdi held a media conference outside city hall on Oct. 31 where they spoke of their experiences campaigning. Damptey explained that media have to be cognizant that lack of intent does not mean a lack of impact.

“To the media, I say you can write an article, but understand the implications of how what you write will be perceived and used,” he said. “The impact cannot be swept under the rug. We have to do better.”

That day, Damptey noted that voting is “a little piece” of fostering change in Hamilton.

“We change our democracy by being active, being connected to community groups,” he said.

Damptey, in fact, delegated at a planning committee meeting on Tuesday. He called on councillors and Mayor Andrea Horwath to oppose Bill 23, the much-criticized housing bill that the Premier Doug Ford-led PC Party of Ontario government passed on Monday.

“You are going to have a bill that does not give municipalities the revenue that they need to invest in the people in their cities,” he said.

“You need to come up with a creative way to say you do not support this … I know municipalities are creatures of the province, but at the end of the day you have to listen to what people say… This bill is not about affordable housing, it’s about making other people rich and destroying our environment.”

Bill 23, The More Homes Built Faster Act, has been criticized by municipalities that say the removal of development charges will result in significant property tax hikes so municipalities can make up for revenue shortfalls. The elected leadership of Hamilton is expected to hear about that at an upcoming AFA (audit, finance and administration) committee meeting.