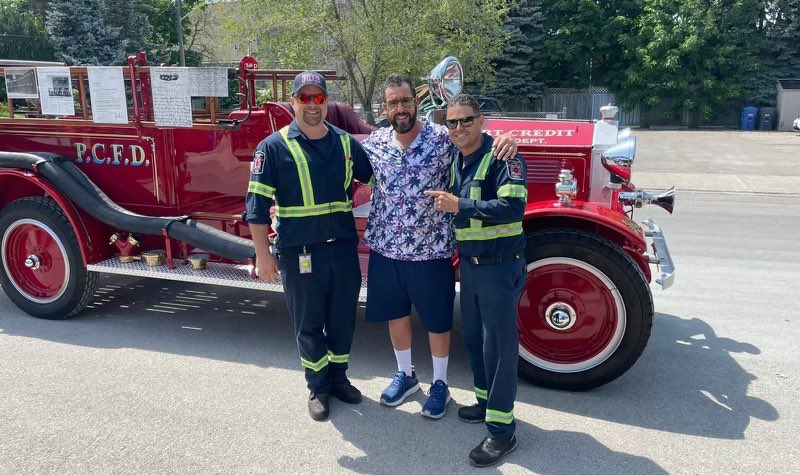 Sandler is seen posing with two members of Mississauga Fire and Emergency Services in front of the Port Credit Bickle fire truck.

It’s hard to say which one is cooler 😎… Adam Sandler or our Bickle fire truck 🚒 pic.twitter.com/58E4tIe2wV

Sandler is currently in the GTA filming his most recent Netflix production “You Are So Not Invited To My Bat Mitzvah!”

The movie is based on a novel by Fiona Rosenbloom, originally published in 2005. The story centers on a young girl looking forward to celebrating her bat mitzvah.

According to a casting call, rehearsals and filming will be taking place in the GTA from June 20 to August 12.

Multiple people have already reported seeing Sandler before he posed for the picture with the Bickle fire truck.

Twitter user Miguel A. Checa posts a selfie with the star on June 25 after running into him on a Toronto street.

And on June 30, Twitter user Henna Mazzocco posted photos of herself with Sandler in the Port Credit area.

The GTA has become Northern Hollywood for production companies as evidence of filming continues to be spotted.

Twitter user Blair Thrasher identifies a set basecamp for Sandler’s latest film, posting photos on June 29 of a sign pointing into a lot at Speers and Kerr St. in Oakville.