A West End Union Station Could be Coming to Mississauga 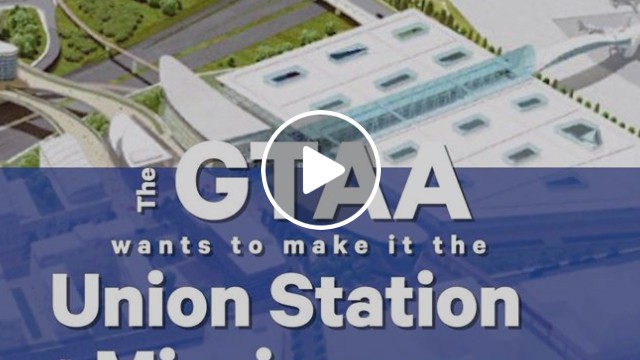 Back in February, we found out that Greater Toronto Airports Authority (GTAA) has plans to transform Pearson Airport into a regional transit centre (think of a west end Union Station).

Now, it appears GTA mayors–including Mississauga Mayor Bonnie Crombie–are more than on board with the ambitious plan.

At the event, the GTAA “shared new research that further supports a proposal for a regional transit centre located at Toronto Pearson, serving as a second major mobility hub for the Greater Toronto Hamilton Area (GTHA).”

As everyone likely knows, there’s incredible–and understandable–demand for more and better transit in the GTA and surrounding regions. At present, the populous region is underserved, which is concerning when looking at projected population growth.

The GTAA pointed out that along with the well-researched benefits of reduced congestion and GHG (greenhouse gas) emissions and economic growth, the organization’s research demonstrated strong demand for better transit in the West GTHA.

As of now, the west GTHA  generates more than 4.5 million trips per day, representing 35 per cent of the region’s trips. Only seven per cent of these trips are by public transit. Interestingly enough, research showed that nearly twice as many west GTHA commuters travel across the top of the GTA to North Toronto and York Region than to downtown Toronto.

The GTAA also revealed that despite greater demand to the northern areas than downtown, more than 60 per cent of transit trips require at least one connection, with more than 20 per cent requiring two or more. Only 35 per cent of trips downtown require a connection.

Also, less than eight per cent of “reverse commuters”–people travelling from Toronto to jobs in the west end–commute to work using transit, compared to 42 per cent of West GTHA commuters heading to downtown Toronto.

According to the GTAA, the study confirmed that even if the airport did not exist, the area around Toronto Pearson would still be the logical place for a “Union Station West.”

That is, quite obviously, good news for Mississauga–and the mayor is quite on board.

“Mississauga, located in the heart of the Greater Toronto and Hamilton Area (GTHA), is proudly home to Toronto Pearson International Airport – Canada’s national airport and an important generator of local economic development opportunities,” said Crombie in a statement. “Whether directly, or indirectly, all roads and rails must lead to the airport. I support a vision that re-imagines Toronto Pearson as the Union Station of the western GTHA which will help people travel to Pearson, and throughout Mississauga and the GTHA.”

As stated earlier, the GTAA recently announced plans to build a regional transit centre on airport property to “support both its growth plans and the region’s need for better transit connectivity.” In terms of costs, the GTAA has indicated it will fund the development and construction of the transit centre (which might come as a relief to many, as big ticket projects often prompt people to ask “who is paying for this?”).

The GTAA will be publishing the full findings in coming months.

“There’s more alignment than ever right now amongst all levels of government. We can’t miss this opportunity to have important conversations about the economic linkages between the massive employment in the airport area and this region, and the entire province, to thrive,” said Del Duca in  statement. “The province is pleased to have such strong partnerships with the GTAA and Ontario’s municipalities and we appreciate the opportunity we were given to be part of these discussions today. I look forward to working more closely with all partners to study the Toronto Pearson transit centre.”