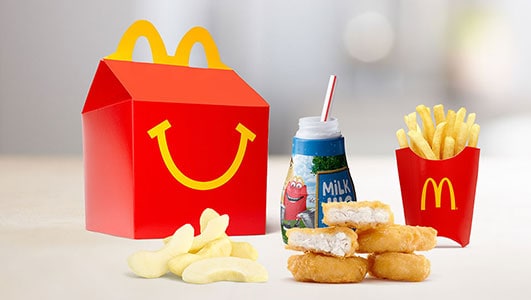 Do you love — or do you know a kid who loves — McDonald’s Happy Meals? Well, you (or the kid you know) should probably load up on those apple slices and McNuggets, because a newly proposed law could ban them in Canada.

Conservative senator Nancy Greene Raine’s Child Health Protection legislation (under the Canada Food Act) was given a second look at the House of Commons on Tuesday December 12, 2017. Basically, the legislation says that food and drink marketing that’s directed towards children should be banned Canada-wide.

Proposed legislations make their way to the House of Commons all the time, but it’s pretty rare that a private bill is passed — but this one has made it to a second reading.

“Now, more than ever, our children are exposed to a barrage of advertisements for unhealthy foods and beverages,” said Liberal MP and former physician Doug Eyolfson. “It therefore follows that those who are marketing their products to children will be affecting children’s eating decisions. In fact, recent trends confirm that this is indeed the case.”

Though in recent years some healthy additions have been made to good old McD’s Happy Meals, such as apple slices and milk, they still fall under the types of food and drink that would be banned if the bill were to pass. Happy Meals are, after all, specifically marketed towards children.

According to Eyolfson, one in three Canadian children is considered overweight or obese. Further, he stated that obesity is linked to chronic illnesses, such as heart disease, type 2 diabetes, and some cancers.

The intial legislation by Greene Raine aimed to ban food and drink marketing geared towards “children” under 17 years of age, but this amendment brought to the table by sponsor Eyolfson would change the age limit to 13 years of age.

Currently, Quebec has a similar ban on marketing initiatives geared towards children under 13, which the new legislation would aim to reflect.

The National Post notes that there are many factors at play here. While the government seems on board with the bill, it’s definitely receiving its fair share of critique.

Though the french fries may certainly play their own part.

The bill is still in the proposal phase, and it remains to be seen whether or not it will indeed pass.

What do you think of the new legislation?