A Night of Glitz and Glamour at the MARTY’s 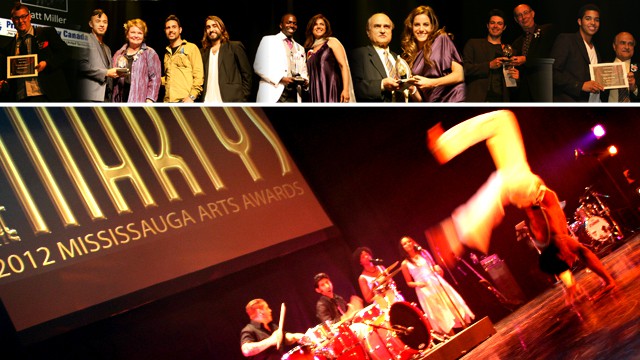 Hosted my the Mississauga Arts Council the Martys, which stand for “M” as in Mississauga, teamed with “Arty” for arts, brought together the city’s best emerging and established artists. With awards ranging from literary arts to visual arts to media arts and everything in between, the Living Arts Centre was buzzing with talent and excitement.

“We want to celebrate the artistic achievements of Mississauga and let the community know that we have great artists in our city and that we should support each other,” said MAC office manager and membership coordinator Sandra Cina.

That’s exactly what happened Thursday. With a two-hour red carpet event, guests had an opportunity to meet the 90 nominees and make lasting connections that will truly change the artistic world forever. “It’s a great way to network with people and just see the people who are also part of your community,” said emerging performing arts nominee Janée Olivia. For up and coming artists this is truly a great and often unseen opportunity. Cities like Toronto or Montreal don’t often pay homage to their talents as they are seen as established areas where people go looking for such lucky breaks. Reid, who is a first time nominee, is grateful that his skills as an actor and jazz singer are finally being recognized, not only by his peers, but by the city too.

Unlike the other awards, which winners are chosen by a panel of judges, Reid’s prestigious award is selected on by the general public via online voting on the MAC website.

This is where the community truly comes together to show their supports for their fellow natives.

“I think it’s a great way to bring recognition to those who make their art their life. Whether it be music, painting, dance, whatever. There are so many talented people in this city and it’s nice to see them rise above,” said Mississauga native Emily Poulin, who did not attend the event but knew exactly what the Martys were.

Poulin, like many others in the community, understands the importance of supporting the arts, especially from a youth perspective. They are the future of this community and will help keep these different disciplines active and prominent in everyday life. As such it was nice to see one of MAC’s best organizations present: the Limelight Association of Young Artists.

This group is comprised of some of the best young artists out there including Honourable Mention winner Matt Miller and fellow Emerging Literary Arts nominee Ihsan “Teddy” Aksel. Both Limelight members have done an excellent job of not only bringing their talents to the table, but have gone out of their way to get the community involved as well.

It is because of people like this that keep the arts alive. As such, it was a bit disheartening to see so few of these young talents present on stage during the actual award show. With presenters tending to be suits from the different sponsors and half of the winners being over the age of 30, it would have been nice to see more young and emerging artists involved.

That’s not to say that the show itself was a bust. In fact, it was fast paced, with Oscar-esk styles of having the music playing for overdone speeches. As well as entertaining with performances by The Davor Jordanovski Band, The Mississauga Festival Chamber Choir and The Damon Pfaff Band.

The highlight of the evening had to be The Axé Capoeira Dancers, who uses Afro-Brazillian martial arts, which combines combat skills with dance and music. It is clear from last night’s attendees and performances, that Mississauga has an abundance of talented people. With the help of MAC and the community there is nothing this city can’t achieve. And it won’t be long before more people from this city make their mark in Canada and abroad.

Emerging Performing Arts Group:
Winner: Vibonics
HM: I Rock With the One