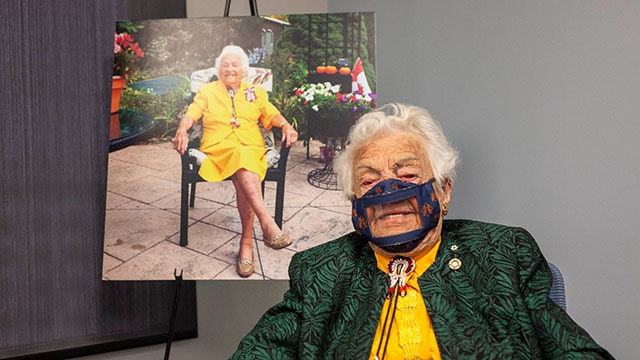 Beloved former mayor Hazel McCallion is celebrating her upcoming 100th birthday with a new book that will raise money for a Mississauga hospital.

On Nov. 23, McCallion announced that she is partnering with Trillium Health Partners Foundation (THPF) to release a commemorative photo book chronicling her life and achievements as Mississauga’s fifth and longest-serving mayor.

“I’m going to be turning 100 years old this February but with COVID-19, we had to find an innovative way to celebrate. That’s why I’m honoured to support Trillium Health Partners with this exciting fundraising initiative,” McCallion said in a statement.

“This 100th Birthday book will feature a visual story of my life, as well as the many businesses and community members who have helped build this great city and I am excited to share it with my community.”

McCallion will dedicate the proceeds from the sale of her 100th Birthday Book to the redevelopment of THP’s Mississauga Hospital site.

“No one embodies the spirit of public service more than Hazel McCallion, who has dedicated almost four decades of her life to the great people and City of Mississauga. I am proud to call her a friend and advisor,” said Premier Doug Ford in a statement.

This announcement comes a few weeks after Mississauga city councillors approved a motion to name the city’s Central Library—which is expected to be completely redeveloped—after former McCallion in honour of her upcoming birthday.

The library will be officially renamed the Hazel McCallion Central Library next year.

THP is the largest community academic hospital in Ontario, with over 1.75 million patient visits last year. The organization says that over the next 20 years, it will see the highest growth in demand for services and the greatest need for incremental bed capacity in the province.

THP says the new Mississauga Hospital will have more capacity to care for patients, while “reflecting the best of today’s standards.”

“If we’ve learned anything from COVID-19, it’s the importance our hospitals play in the health and wellbeing of our community,” said Mayor Bonnie Crombie in a statement.

“This fundraising effort will go a long way in ensuring residents continue to have a world-class hospital system in Mississauga. What is truly inspirational for me, is that after all these years Hazel continues to find a way to make significant contributions to our City.”

More than $1 million dollars has already been raised for the initiative from all of the community members who support the former mayor. The goal is to raise at least $1.5 million.

Photo Books are available for purchase for $100.

To buy a book to learn more, click here.