A Massive European Style Village is Coming Just Outside Mississauga 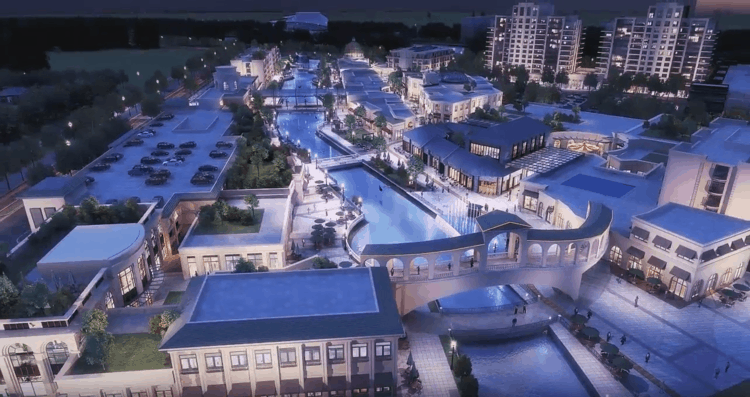 We’ve always looked towards Europe for inspiration in Canada in terms of how to live life just a little bit better. They have good food, deeply traditional culture, incredible architecture and pinnacles of urban development.

With less amount of space for development than in North America, European cities and communities have always had to make do with what they have. Hence, when you go to places like Vienna, Barcelona or Madrid they are very pedestrian oriented, walkable places.

Now, a piece of that urbane, pedestrian experience is coming near Mississauga and the GTA.

This month, a Retail Insider article revealed that Chinese developer GR Investment Group unveiled a project at the ICSC Conference in Toronto that is sure to get not only heads turning, but people to come from all over the GTA and beyond.

Dubbed “Paradise Walk,” the commercial centre is more akin to projects in Europe and the United States, according to the company, and will be located at Niagara Falls. The aim is to attract more locals as well as an estimated 3.5 million tourists annually.

The development is going to be part of a larger project called the Riverfront Community at Niagara Falls, a 484 acre mixed-use development which will include homes as well as more than 200 acres of nature preserve.

The site will include a number of amenities such as international restaurants, a boutique hotel, hotel condos, a wedding facility and even “the best natural oxygen bar in the world,” according to Helen Chang, Chairwoman of the Board at GR Investment (Canada).

Niagara Falls city officials recently approved the development through an official plan amendment, and the opening is expected to be in 2022.

Here is Paradise’s Walk exact location in the City of Niagara Falls:

Plans show a European architecture-inspired experience-based commercial area featuring a series of outdoor pedestrian streets with zones dedicated to different tenant types. Included will be several attractive public spaces with central areas that will house attractions such as street performers and a rideable carousel.

About 50 per cent of the commercial mix will be for food and beverage offerings (including restaurants, bars and coffee shops catering to different tastes from all over the world), reflecting a similar mix seen in commercial centres in major global markets. Food and beverage will drive traffic while offering visitors an expansive array of global-inspired dining options.

For more information on Paradise Walk, click here or watch the promotional video below.

Will you and your family be going?