If this shopping mall in Mississauga was built it would have been the biggest mall in the world at that time.

In the 1980s, a proposal for a “Fantasyworld” amusement, shopping, and recreation complex was made to the City of Mississauga by Triple Five Development, the company that built the West Edmonton Mall, once known as the world’s biggest shopping centre. 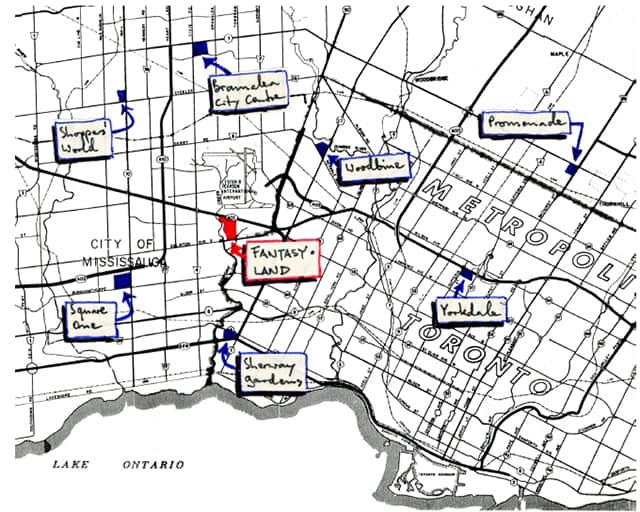 Fantasyworld was to occupy one-and-a-half million square feet and would include a submarine ride, waterpark and wavepool, marine animal theatre, the world’s largest amusement park, petting zoo, NHL-size arena, interactive space museum, gardens, art exhibits, a sports hall of fame, 20 choreographed fire and water fountains, 26 movie screens, a concert stage, an internationally themed hotel with 1,250 rooms, and “the best shops and boutiques from around the world.” 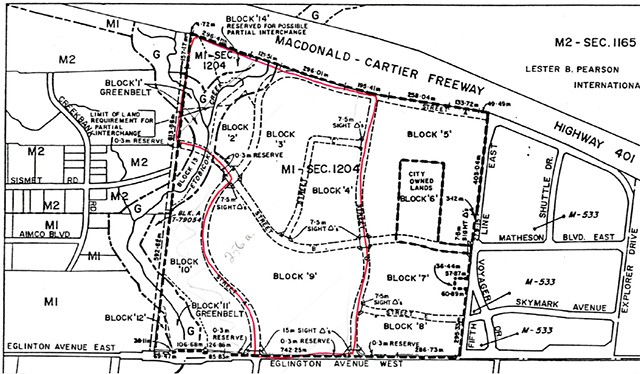 The site plan showed just how massive this project was as it span from Hwy 401 to the north to Eglinton to the south.

Themed “neighborhoods” filled with live entertainment, shopping, and restaurants would include New Orleans’ Bourbon Street, and London’s Piccadilly Circus. Little Italy would have had real gondolas traversing indoor canals, while the replica of Paris’ Left Bank (La Rive Gauche) would include a live theatre.

It sounds amazing, unless you’re an area mall, like Square One, or an area theme park, like Canada’s Wonderland.

Both were vocal about the damage Fantasyworld would cause to their businesses.

Mississauga’s rejection of the first proposed site caused the developers to explore other lands in the area, but ultimately they dropped their proposal. Mississauga’s “Fantasyworld” was not to be.