A Major Professional Wrestling Event is Coming to Mississauga

The Great White North has some storied history when it comes to professional wrestling.  A number of the most prominent wrestlers in history, such as Bret Hart, Edge (Adam Copeland), and Chris Jericho are born and bred Canadians.

Mississauga is home to Battle Arts Academy, a training facility for aspiring professional wrestlers, MMA fighters and other athletes. It’s currently run by former WWE star Anthony Carelli (aka Santino Marella), and it also hosts shows for an independent wrestling promotion called Destiny Wrestling. Insauga’s own Khaled Iwamura briefly wrestled for Battle Arts in some of their shows a few years back.

But most people, when they think of pro-wrestling, think of World Wrestling Entertainment (WWE), or ‘’WWF’ for those who didn’t hear about how they lost their lawsuit with the World Wildlife Fund. When the WWE comes to the GTA, it usually hosts its major pay per view or live events in Toronto.

That said, it looks like a major event is about to come to our neck of the woods.

Back in 2016, WWE brought their pay per view ‘Survivor Series’ to the Air Canada Centre. Last year, WWE held events at the ACC during the summer (as I documented during one show where this hilarious sign lamenting the perils of Brampton traffic was held up by a fan), and their RAW brand recently held a live event in Toronto just before New Year’s Eve, with a future show already booked for March 2018. WWE hosts live events all across North America for their three main ‘brands’: RAW, Smackdown Live, and NXT.

NXT held one of their marquee shows in November 2016 at the ACC just one night before their Survivor Series, and now NXT is coming to Canada’s sixth largest city.

According to a press release obtained by insauga, an NXT Live event is going to take place at the Hershey Centre on Thursday, February 22. This will be the first time that NXT (or any official WWE affiliated live programming that I am aware of) will be coming to Mississauga. 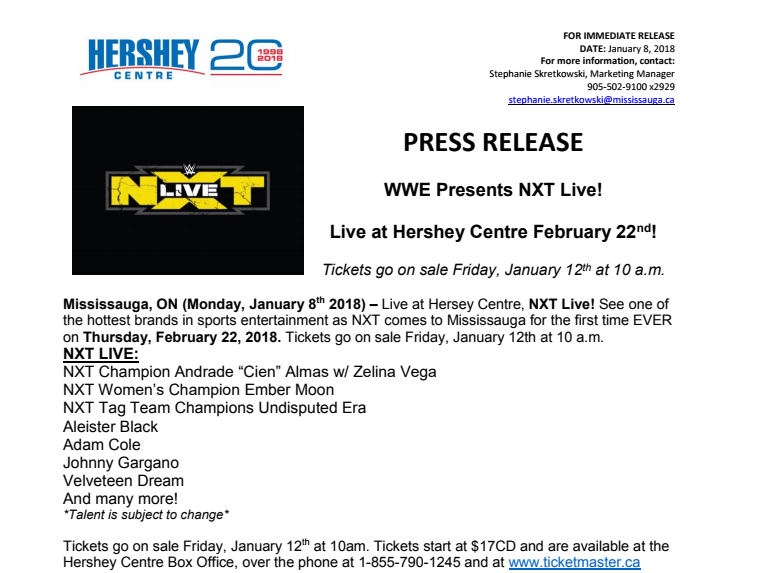 NXT is the unofficial ‘third brand’ of the WWE, because on paper it’s the company’s developmental territory where they train future stars once they are ready to make their debut in front of a wider WWE audience. NXT shows are usually held at Full Sail University in Orlando, Florida where WWE also operates their world class, state of the art Performance Centre. This facility is where talent train, rehab, learn to wrestle ‘the WWE style’ as well as develop their in-ring characters.

Some fans think NXT is the superior brand of WWE, because the more dedicated local Floridian fan base allows talent to build a story and character while getting fans emotionally invested in them as well. The quality of matches many believe are also better, because they only have one hour with only one or two matches that are higher quality because they’re not over-stretched (by contrast, WWE’s flagship show RAW is three hours long).

NXT Live shows are also unique because besides the talent and supporting characters one sees on television, fans also get to see talent who are still developing their character and plying their craft before they even make an appearance on TV. Besides the people already mentioned, you may even see a few faces that NXT fans who don’t live in Florida haven’t seen before.

These are some of the highlights from NXT’s “Takeover” pay per view that was held at the Air Canada Centre in November 2016.

If the live shows are anything as hard hitting and intense as this, I think Mississauga is in for quite a post Family Day treat. Who knows? There may even been some cross promotional encounters with Mississauga’s Destiny Wrestling roster?