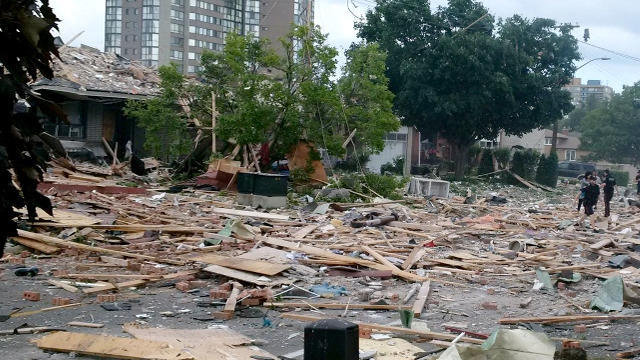 It’s hard to believe that the massive house explosion that shook the city and made national news happened a year ago.

In the 12 months since the explosion, some residents have struggled to reclaim their homes and adjust to their unexpected “new normal.”

Homeowners who were forced out of their properties (some of which had to be demolished for safety purposes) had to wait for months to find out what, exactly, sparked the devastating blast that levelled part of their neighbourhood.

Now, a full year later, the city is reminding residents where we’re at and what affected community members can expect going forward.

On June 28, 2016, a home located at 4201 Hickory Drive exploded. Months later, we would learn that homeowners Robert Nadler and Diane Page intentionally set off the blast as part of a double suicide. While the incredible explosion initially affected a whopping 800 homes in the area, there were–surprisingly and miraculously–no deaths (outside of Nadler and Page, who were pronounced dead at the scene).

The unprecedented incident made headlines all across the country.

“First Responders arrived on the scene within minutes of the explosion and began the process of evacuating the immediate area, providing assistance and closing off access points in the neighbourhood,” said Mississauga Fire Chief Tim Beckett in a statement. “Twenty-four hours after the explosion, residents from 69 homes were still unable to return, as their homes required work to make them safe. For the next several weeks, Mississauga Fire, as the lead agency, worked to provide information and assistance to the community in the recovery process.”

“This incident on Hickory Drive shook our entire community. Several residents suffered injuries that day and many were uprooted from their homes,” said Mayor Bonnie Crombie. “The City remains involved in the recovery process working with homeowners to expedite building permits and providing grants for tax relief. At this point in the recovery process, we must rely on insurance companies to do their part to ensure these remaining homeowners get back into their homes.”

A few months ago, news broke that residents affected by the incident would still be on the hook for their property taxes. Initially, the mayor and some members of council defended the decision, saying that waiving property taxes–even in the event of a disaster–was unprecedented.

After some pushback, however, council decided to provide a total of $30,885 in tax relief and waive the 1.25 per cent late payment charges for affected residents, as well as the $15 tax appeal application fee. The Municipal Property Assessment Corporation (MPAC) also agreed to reassess all the properties impacted in the area and will be issuing Post Roll Assessment Notices for 2017 to reduce their assessment values.

That movie came in March of this year when Ward 3 Councillor Chris Fonseca brought forward a motion to provide a grant to cover the city’s portion of property taxes. Mayor Crombie and councillors also called on the regional and provincial governments for help and they agreed to cover the remaining portions of the property tax collected.

“This was an extraordinary event that impacted residents living in the Hickory community. We know that recovery for these residents is exhausting and stressful,” said Ward 3 Councillor Chris Fonseca. “Staff from the City and its agencies did an excellent job of providing immediate, coordinated services to those people in their time of need in the first few days and over the weeks that followed. I also want to thank the many local businesses and organizations for their support and generosity following this incident. I continue to be committed to the residents and community in providing support and services from the City, Region and outside agencies to ensure their needs are met.”

As for other helpful measures, council passed a motion to provide a subsidy to offset stormwater changes for displaced residents and the city expedited the process of obtaining building permits for affected residents.

Multiple residents have not been able to return their homes, as construction is still ongoing.

Interestingly enough, the lot the house once stood on recently sold for $550,000.