A Cry For Help: Frozen Garbage Bins in Mississauga 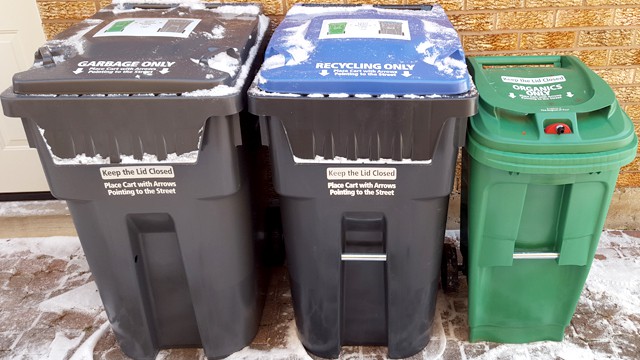 I recently came across an excellent article in the New York Times that warned readers of the perils of minimizing and ignoring “trivial” first world problems. A problem, no matter what world it originates from, is still a problem (although there are, of course, degrees of problems and some most certainly trump others).

People in Mississauga are experiencing both a first world and winter-exclusive issue and they need help.

The city’s newest waste carts — the fancy new wheeled ones that are used for garbage, recycling and compost — are causing some homeowners a slight but serious inconvenience.

The lids are freezing shut. There’s also been problems with the locks on the green bins freezing over frequently.

One reader told us that he reached out to City Councillor Sue McFadden regarding his frozen bins and received a timely reply saying she hadn’t heard any other complaints about freezing thus far, “especially if they are [stored] in the garage.”

Well bins stored in garages may be less prone to freezing, not everyone has garage space for the sizeable containers (even the smallest garbage carts are about three feet high and one foot wide). We live in the land of plenty and we need garages for excess dishes, broken bicycles, over-large SUVs and adorable pre-lit snowman decorations.

Another resident told us that she’s had issues with garbage bags freezing to the bottom of the bins and being left behind after waste pickup.

This is not a terribly surprising problem and it certainly doesn’t offset the convenience of having a larger and more stable waste receptacle. In the warmer months, these wheeled bins will be most convenient for homeowners and waste management alike.

On that note, we have received some comments about wheels falling off, but the resident who reached out to Sue McFadden was told to inform the city or their local councillor of broken wheels to receive replacements. So, that is an annoying but more manageable problem. If you’re weak and tired from the egregious cold, unfreezing a frozen bin is a nightmarish proposition.

We’re not sure if there’s an official solution to this problem. This is Canada and things freeze, even convenient rolling garbage bins. Perhaps the city could consider some new latches that minimize freezing potential, but that sort of initiative might be a ways off — especially if freezing lids are being grumbled about among friends rather than in City Hall.

So, we reach out to you, our readers, for help.

What can one do when his or her cart is frozen shut and there’s a block of moldy, rotting cheese to be disposed of?

Any and all suggestions are welcome!

If the freezing is truly a hardship for you that you would like the city to address, please bring your concerns to your local city councillor or contact waste management.