8 Things They Can Build on the Ninth Line Lands in Mississauga? 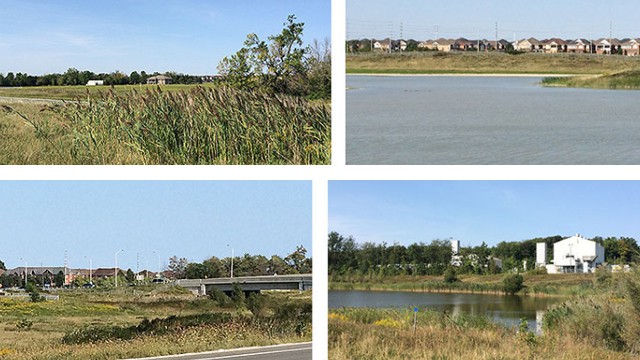 The city of Mississauga has launched public consultations on the future of the Ninth Line lands on the western fringes of Mississauga.

Here’s the back story: in 2010 Mississauga basically purchased/annexed a portion of land from Milton, stretching from Highway 401 in the north, Ninth Line on the east, all the way down to where Ninth Line intersects with Highway 407, and along the 407 back up where it intersects with the 401. It’s a rather slender slither of land, but with lots of potential. That’s why the first two meetings this week were so important, as the city organized them to solicit feedback from the residents as to what they wanted to do with this bounty, the last frontier of undeveloped land.

The meeting I attended was on June 6, at the Garry Morden Recreation Centre (where our firefighters get training). Every time I go to these types of public meetings, when the format is a presentation from the project managers followed by roundtables where residents discuss their observations, I feel as though I always end up sitting at the table with the most complainers. I’m sure there were people with complaints at every table, but it’s a quirky personal pattern that I’ve observed myself getting into. There were more comments on the negative outcomes than on possible positive long term benefits. I also learned that eventually Ninth Line will have to be widened to two lanes, and that there is a 407 Transit Way coming in east from Markham that will go along the corridor down west all the way to Burlington.

There were many options offered during the various group presentations on what residents want to see built on the Ninth Line lands, since the expectation is that not all land is slated for development and it’s not for one single type of project. Here’s a smattering of what I heard offered as options:

Community Garden/Farmers Market
This kind of already happened, as Many Feathers, a non-profit dedicated to creating environmentally sustainable community spaces in Mississauga, has set up a community garden at the intersection of Ninth Line and Britannia. They have a Farmers Market open on June 12 at the Lisgar GO Station from 9 am to 2 pm. It is a good start, and a good number of people expressed similar interest in preserving the lands for natural use and having something for the community like a garden.

Community Centre
Another idea also in the works, Councillor Sue McFadden’s ‘Information Guide’ stated that plans are underway to build a state of the art community centre on a 55 acre piece of land at Ninth Line and Tacc Drive. The centre is to include a swimming pool, triple gymnasium, meeting space, and outdoor amenities like soccer fields, cricket pitch, multi-purpose field, skateboard park, splash pad and basketball and tennis courts. Construction is slated to begin in 2017. I would be interested in the design of this community centre to see if it can conform to the natural environment.

Affordable Housing
If you’ve ever driven up and down Ninth Line, you’ll know that the homes built along the east side of the street are some of the city’s newest residential properties and neighbourhoods. Churchill Meadows is one of Mississauga’s youngest communities and many young families as well as retirees have moved into the area, with house prices ranging from $500,000 to $800,000. There is currently a 1.5 per cent vacancy rate in this city, so rentals and affordable housing are crucial. Many people at the meeting complained about even a six- storey residential development, but many more people said they needed more affordable housing — not just social housing for specific people; just living units that are reasonably priced.

Driving Range
Hey, why not? From the way the area looks, a golf course seems like a natural fit. People love golf.

Natural Conservation Area
It is unfortunate many people in Mississauga do not know about the hidden gems in our city like the Riverwood Conservancy, which is literally located in the centre of town. There is also the Britannia Farms, but that is owned by the Peel District School Board and not always open to the public. The idea that the area should be just a natural conservation area came up and elicited more positive feedback than some of the other ideas proposed by city staff.

Dog Park
Everyone loves dogs, right? Leash-free dog parks are quite popular amongst every demographic, and the cost to build and maintain them is quite minimal.

Elevated Transitway
Since there are plans to build two stations for the 407 Transit Way, some people proposed that the link going adjacent to the 407 to Burlington be on an elevated track similar to the Canada Line out in Vancouver. I think this is just a way of saying they don’t want any development on the lands in question, which leads me to the last option:

NOTHING…ABSOLUTELY NOTHING
As mentioned before, there are plans to widen Ninth Line to two lanes to accommodate anticipated traffic flow of commuters coming to and from work. Would we really want to exacerbate the problem by building more residential developments or places for people to go to? Why not just leave the area the way it is? Driving up Ninth Line on my way to the meeting on Monday, it was actually serene and peaceful. This is the last piece of undeveloped land in Mississauga.  A number of people suggested it should just stay that way.

So what do you think? What should be built on the Ninth Line lands?