Nishit Parikh from Toronto is still trying to comprehend his massive $55 million LOTTO MAX jackpot win from the August 5, 2022 draw.

“I’m pretty sure I will be checking my bank account a lot to see that amount of money in there. It’s still so unbelievable!” said Nishit. 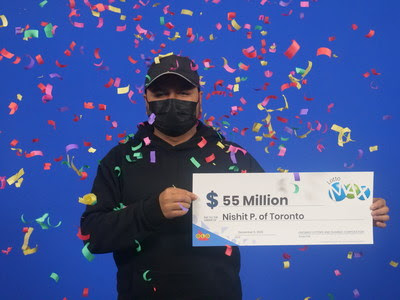 The 30-year-old project manager said he plays his own numbers that are comprised of significant family dates, but it was one of the additional auto-generated LOTTO MAX line of numbers that won him this life changing-prize. “I purchased this ticket about an hour before the draw closed.

The next day I heard on the news that someone in Toronto had won and of course hoped it was me,” he shared while at the OLG Prize Centre in Toronto to pick up his windfall.

“When I checked my ticket on the OLG App, I saw the Big Winner screen, but didn’t believe it. I was looking at the zeroes, squinting my eyes to do a double take. I think my brain shutdown – I was trying to process what was happening.” Then Nishit went to ask his dad to be a second set of eyes. “When I scanned it in front of him, he was so excited – he believed it right away. I still wasn’t convinced, so I had him scan the ticket on his phone in case it was a glitch on my end.”

That’s when it became a reality for Nishit. “I was overcome with joy. I thought to myself, now I can finally afford a house in Toronto,” he laughed. “I told my close family on a video chat, and they guessed what happened. They were ecstatic for me.”

Although Nishit knew he had the winning $55 million LOTTO MAX ticket, he made sure to take some time to seek solid financial advice on how to properly deal with such an incredible amount of money before coming to the Prize Centre to start his prize claim.

Nishit said he feels gratified knowing he can now take care of his family. “My parents made so many sacrifices for me to succeed. Now I can take care of them the way they deserve.”

Exploring the world is first on his bucket list. “This win gives me freedom and opportunity to spread my wings and see the world. I’ve always wanted to see South America and now I can take my time and savour the scenery across the continent,” he said. “I will also make some real estate investments but will take my time to settle into this life changing win. I want to be smart with this money and live a life that’s as normal and low-key as possible,” he concluded.

The winning ticket was purchased at Petro Canada on Markham Road in Scarborough.

LOTTO MAX players in Ontario have won over $7.5 billion since 2009, including 95 jackpot wins and 842 MAXMILLIONS prizes, right across the province. LOTTO MAX is $5 per play and draws take place on Tuesdays and Fridays.