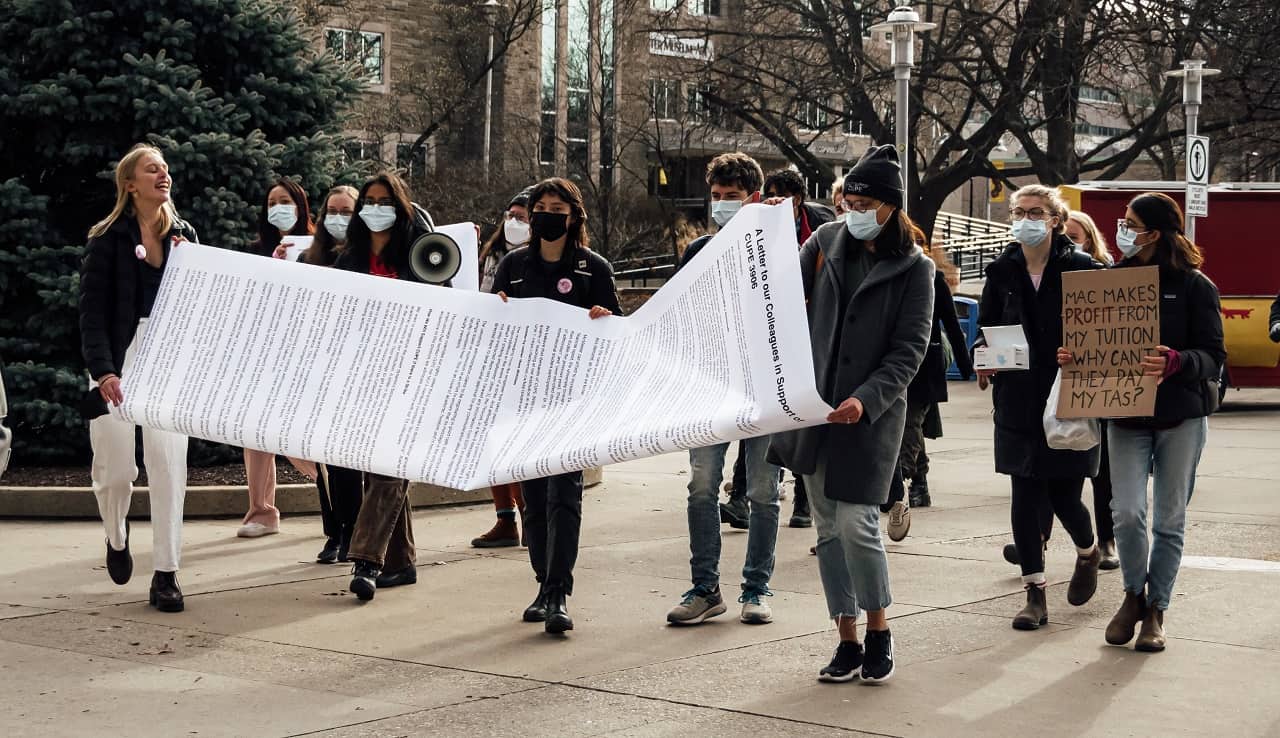 Members of Canadian Union of Public Employees local 3906-1 voted 69.6 per cent in favour this week of a five-year labour pact with the Hamilton university. Graduate TAs and RAs will receive a 14.1-per-cent wage increase ($6.32 per hour) over the half-decade life of the agreement, and undergraduate TAs will receive a 21.7-per-cent hike ($5.66). A statement from CUPE said their concessions to McMaster include not receiving fifth-year funding for doctoral candidates or tuition reimbursement when fees are increased.

“We took on a truly conservative university, mobilized students, teaching and research assistants, and faculty, and we came out the other side with some real wage gains,” stated Chris Fairweather, president of CUPE Local 3906. “In a time of continually skyrocketing inflation, this is something members really needed.”

Canada’s inflation rate is 6.9 per cent, although it has slowed in recent months. The going rate in Hamilton for one- and two-bedroom rental dwellings has also spiked since 2019, the last time that local 3906-1 and McMaster were at the bargaining table.

Members of 3906-1 started the fall term without a contract and had a 90 per cent strike vote in October. They went on strike Nov. 21 and were out for three weeks before having a deal they could present to members.

On Dec. 8, the last day of classes, students and faculty members marched to the office of McMaster president David Farrar to present letters in support of the striking TAs and RAs.

Yesterday we delivered giant letters for @cupe_3906 to President David. We made sure his office was recorded taking our message. Now that admin is finally back in talks, students will be watching closely… if @mcmasteru doesn’t give TAs + RAs a fair deal, we’ll be back again! pic.twitter.com/n44FDABzyL

The academic workers who went off the job were to return to work Wednesday (Dec. 14).

“I appreciate the efforts that faculty, staff and students made to maintain collegiality during the strike,” McMaster vice-president (academic) and provost Susan Tighe stated last Saturday. “Even when we disagree, maintaining respect for one another is critical.”

The contract will extend to 2027, past the next Ontario election cycle, since the province’s fixed election date is in June 2026. The vice-president of CUPE local 3906 called the agreement with McMaster a baseline.

“We didn’t get everything we wanted, like fifth year funding for PhD students or tuition reimbursement, but with the amount of solidarity the university community showed us, I know we’re in a better position today than ever,” stated Shalen Prado, vice-president of CUPE local 3906.

“We’ll keep building capacity, informing the university community (of) what we need as workers, and calling on McMaster to do what’s right, both over the course of this agreement and ahead of the next round of bargaining.”