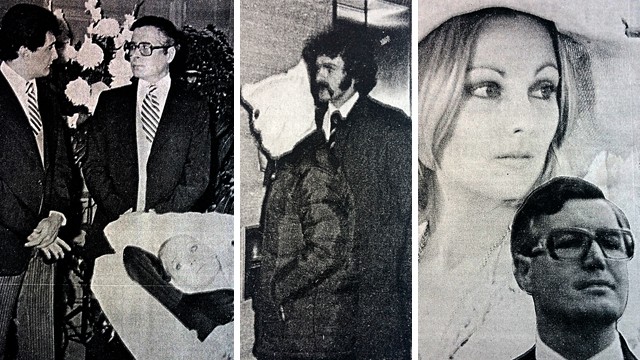 Today, while dipping old dim sum in unbelievably spicy hot sauce, I suddenly felt grateful to be 1) eating old dim sum (yum!) and 2) alive. Mississauga is one of the safest cities in Canada (probably one of the safest in the world) and most people who call it home will never fall victim to bloody, bone chilling murder within the confines of its safe, motherly borders.

That said, the city — just like every other city — has been home to a few gruesome crimes. So, in the interest of scaring everyone with morbid (but darkly engrossing) tales of savage life-taking, here’s a look at five grisly crimes that happened in Mississauga.

Back in 1973, a Hungarian-born Mississauga millionaire named Peter Demeter was accused (and subsequently convicted a year later) of hiring a contract killer to murder his Austrian-born, fashion model wife, Christine Demeter (nee Ferrari). Christine was found bludgeoned to death in the garage of the family’s Mississauga home. You can read more about the case here. Like too many domestic murders, the case is said to involve an affair and some insurance money (namely that Demeter was in love with another woman and wanted to collect on Christine’s $1 million insurance policy). The elderly Demeter is currently serving a life sentence and claims he was wrongly convicted.

Back in 2003, a convicted sex offender named Douglas Moore killed two young men — Meadowvale resident Robert Grewal and Milton resident Joseph Manchisi — because he believed (inaccurately, if it matters) that they had broken into his Meadowvale home earlier that year and robbed him of over $4,000 worth of legal and illegal goods. He also killed a 15-year-old teenager named Rene Charlebois for unknown reasons. Moore was a known drug dealer and sex offender with a history of molesting boys. Moore hung himself while in custody at the Maplehurst Detention Centre in Milton in 2004. You can read more about the case and victims here.

The Tragic Case of Aqsa Parvez

Almost everyone remembers the horrific murder of Pakistan-born, 16-year-old Mississauga high school student Aqsa Parvez. Strangled to death in her family home in 2007, Parvez was killed by her father and brother in what appeared to be a pretty straight up honour killing. Parvez clashed with her family (namely her father, Muhammed Parvez) over her defiance of some of their rigidly enforced rules. She did not wear a hijab and socialized with girls of other cultures. At one point, she left home for a shelter. After moving back the first time, tensions flourished and she ran away once more. After she returned, Muhammad and his son Waqas strangled Parvez in her bedroom. Muhammed called the police and confessed to the attack shortly after his daughter lost consciousness (she died later that night). While it is unclear which of the men actually choked her to death, both plead guilty and are currently serving life sentences. You can read more here.

This was another tragic case that shocked the city. On September 23, 1983, 18-year-old Clarkson Secondary School student Barbara Turnbull was gunned down during a robbery at a Becker’s convenience store. The teen was about to close the shop when several men entered the store and shot her in the neck. The attack, which left Turnbull a quadriplegic, was unprovoked and horrifying for both its violence and randomness. It was a spontaneous act of egregious harm committed against a person who posed no threat to armed assailants. The attackers were identified as Hugh Logan, Sutcliffe Logan, Warren Johnson and Clive Brown. After the attack, Turnbull became an activist for the rights of the disabled and a prominent Toronto Star journalist. She passed away in May of 2015 of complications related to pneumonia. She was 50 years old.

This particular case hit home with Mississauga residents because of the graveness of the act and the fact that the perpetrator, Abdullahi Mohamoud, was able to elude authorities for years. In May of 2011, Atifeh Rad, an employee at the Southdown/Truscott Petro Canada, was killed when he tried to confront Mohamoud over a “pump and run.” Rad grabbed Mohamoud’s car door handle and was subsequently dragged and dropped. He succumbed to his injuries the following day. Mohamoud was charged, but skipped bail twice and quickly became the city’s most high-profile fugitive. He was finally arrested in Alberta in January of 2015 after one of his  co-workers tipped off the RCMP. He was working as an apprentice welder with Husky Sunrise in Fort McMurray at the time of the arrest. Mohamoud has also faced sexual assault and weapons charges unrelated to the 2011 hit and run in various cities.