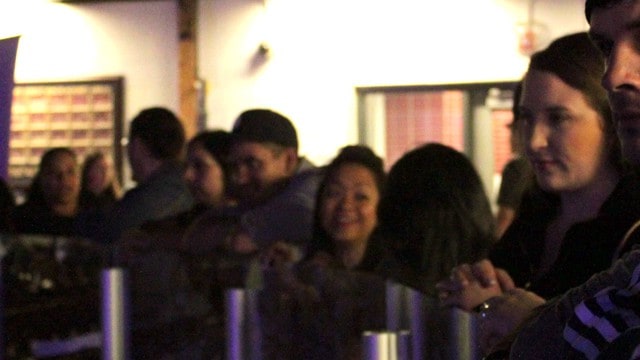 People watching — the art of observing local inhabitants for your own personal knowledge and entertainment.  Many people, myself included, make it a habit to take in Mississauga sights and sounds wherever we go. You can catch me cooling out at any given street corner or community event to see what the scene has to offer. So without further delay, here are my top five places to people watch in Mississauga.

1. The Food Court at Square One:

You know the saying, “you can take the boy out of the country but you can’t take the country out of the boy?” Well, same goes for food court makeovers. You may see the locals eating their KFC on fine china now, but believe me, this spot is a great spot for people watching.  A more memorable sighting at the food court was someone that was obviously new to this planet attempting to use utensils for the first time when eating a chicken kebab. The issue with this was that he was trying to eat his delectable Middle Eastern delicacy with two knives.

This place is a virtual cornucopia of interesting characters on a daily basis.  Saturdays are particularly fruitful for a local people watcher such as myself, as many of the patrons decide to walk to the store for “various reasons”.  The fact that many of the patrons decide to “hoof it” allows certain customers to take it upon themselves to crack open a few cold ones for the walk home.  In the depths of winter, I have seen people toss a couple handfuls of snow into a No Frills bag filled with king cans of Maxxx Ice and shake it around for a few minutes to get them ice cold for the walk home.  Cheers.

3. Bus shelter at the corner of Hurontario and Dundas:

You may have noticed from my other articles that I really enjoy this intersection for many different reasons other than people watching. But, to be honest, whether I am chowing down on some Burrito Boys or crushing a steaming hot bowl of Pho, I always have my eyes open when I’m in the hood.  I have spent many a day just relaxing at the intersection after filling by gullet with ethnic food just to see what the locals have to offer.  One of my favorite sightings was an Indian aunty chasing a would-be thief down Dundas at a clip that would make Usain Bolt jealous.

Man oh man; if you are looking for a rogue’s dinner of muttonheads from around the Mississauga/Brampton area, the parking lot at Oceans on Huronatrio takes the cake. From people posting advertisements for local businesses, sans spell check (ex: “PLANO tuning and moving” as seen above) to pensioners almost coming to blows over parking spots and old men blowing snot rockets as they load their cars, this parking lot has the works! I even saw a kid hurl a massive cabbage at his older sibling in some sort of bizarre fit of rage. A must see!

5. Plane Spotting at the Wendy’s on Airport Road:

I don’t know about you, but as a second generation Canadian my folks still had the old country mentality in them — aka how to spend family time in the cheapest way possible.  Going to Airport Road and watching the planes land overhead is cheap and often attracts a very interesting group of people.  From quasi-vigilante airport safety groups carrying radio scanners while taking notes to ex-air force officers, you will be sure to see some interesting people here.

There you have it, my top five places for people watching in this great city. You know, no matter where you are from or what your place in life is, you can always be entertained by other people’s quirkiness. Whether it’s the guy next to you on the bus eating some sort of strange animal out of Tupperware on a hot summer day or the guy beside you at the intersection picking his nose, there is no cheaper entertainment around.