5 Under the Radar Date Night Restaurants 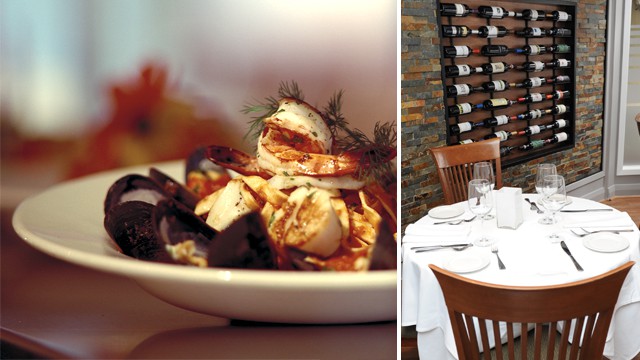 If you’re like me, you’re always looking for a new date place in Mississauga. Whether you’ve been together for a while or are just getting to know each other, it’s important to keep your significant other on his or her toes and wow with some unorthodox choices. Fortunately for you, there are a lot of hidden date night gems in the city.

If you’re like me, you’re always looking for a new date place in Mississauga. Whether you’ve been together for a while or are just getting to know each other, it’s important to keep your significant other on his or her toes and wow with some unorthodox choices. Fortunately for you, there are a lot of hidden date night gems in the city. Without further ado, here are the top 5 under-the-radar date night restaurants.


Bistro Narra is a restaurant mostly known to locals, as it is tucked away in a retail plaza off of Thomas St. in the Churchill Meadows neighbourhood. It’s in an area where walking traffic is almost non-existent. Owners Franz and Esther Hochholdinger have been in the restaurant business for over 20 years, and originally specialized in pastries and desserts at their Apricot Tree Cafe in the Sherwood Forrest Village plaza. Bistro Narra is a different concept and their dinner menu offers surf & turf and lobster crepes and specialties like the Narra Schnizel. For dessert, you can have the Salzburger Nockerl, which is their specialty soufflé. Mark your calendar or book your next night out to Aielli Restaurant. It is one of the finer Italian restaurants in Mississauga that caters to its customers and is a great place to dine. Its 30 year history in Port Credit is a testament to what they do best – food and wine. It was the perfect night for a hearty Italian meal created by Chef/Proprietor Luigi Macerola. Aielli has a beautiful wine room that holds over 10,000 bottles. This area can also host small and intimate private functions. Aielli also has some bragging rights, winning multiple Awards of Excellence from the Wine Spectator — a highly revered resource for the world’s finest wines. A long-standing upscale Sauga gem that’s been loyally serving diners since 1989 is Piatto Bistro, a picturesque fine dining resto on the ground floor of an old-style house-turned-spa at the corner of Dundas and Mississauga Road.  The food and service are special. If they weren’t — or if they were merely adequate — I would not pick Piatto as one of my fav spots insauga. The menu, which contains some mainstays that pre-date the arrival of new-ish (he joined the Piatto team somewhat recently) Argentina-born Italian chef Abramo Tonelli, features classic European-inspired dishes that feature hearty red meats, rich pastas, seafood and mushrooms. Before we start talking about the food and the restaurant, we’ve got to say that we love the name and where Michael’s is located. The setup is so unlike anything else in Mississauga, as it is located at the back of a building in Clarkson off Lakeshore Road and is almost a secret because it’s completely hidden from public view. As you park in the back alley, you will find a glass solarium protruding from the back. It’s almost like you are walking into a secret location. We tried the risotto pescatore which had risotto with shrimp, scallops, fresh tomatoes and white wine (as seen below) and it was some of the best risotto we’ve had. The shrimp were huge, the seafood was plentiful and the rice was perfectly cooked. The server was very pleasant and knowledgeable and gave recommendations, as any good server should. This isn’t a big place, so make reservations — especially on Friday and Saturday nights. This would be a perfect place for a date and they even have a piano room that can accommodate 40 people, which is great for a corporate dinner. They recently introduced a wine room for up to 16, which is great for family parties when you just don’t want to cook at home. Michael’s is expanding so much that it might have a front door one day. Also, Michael’s Back Door has been around since 1981, so you know they’re doing something right. Located in a plaza at the southwest corner of Mississauga on Royal Windsor and Southdown (yes, that is still Mississauga) is one of the best kept Italian restaurants in the city called Casalinga. This place can’t be any bigger than 40 seats and gets packed pretty fast, especially on weekends. They offer house-made gnocchi (small dumplings made from potato, semolina or flour that are usually served with sauce) and house-made gnocchi is usually hard to find, especially in Mississauga. That right there says a lot about the restaurant. We ordered the potato gnocchi that came with lamb, caramelized onions, cherry tomatoes, roasted garlic, mushrooms and tomato sauce. The dish was absolutely delicious and the gnocchi melted in our mouths. Casalinga has been around for just over three years, and if they keep serving this hearty Italian food, they will be here for generations to come.