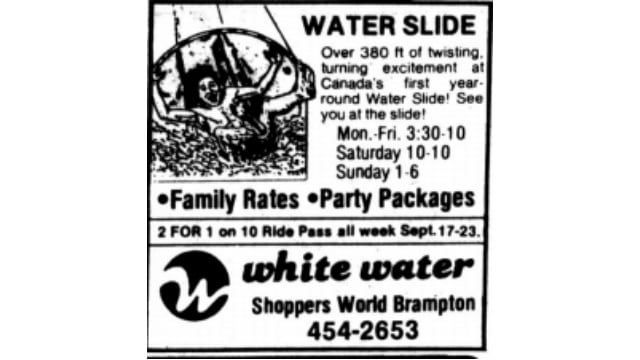 We can live in one city our entire lives and grow up never knowing too-too much about it. Sure, we all know who our mayor is (or do we?) and what restaurants are the best to dine in, but do we know all the quirky and historical facts about the municipalities we call home?

While some Brampton history aficionados might not be too surprised by these facts, a few of you might be.

After all, Brampton is a pretty interesting place that’s home to a lot of history.

Here are five facts you might not have known about the Flower City.

5) Shopper’s World used to have a water slide

Shopper’s World, the old-school mall that offers residents a ton of discount stores and a Canadian Tire, has been the talk of the town since RioCan announced it has big plans for the somewhat tired property. While it’s fun to speculate on what the centre will look like years down the road, it’s even more fun to remember what it used to have–namely a water slide operated by a tenant known as White Water. In fact, here’s a screengrab of a very old boasting “over 380 feet of twisting, turning excitement at Canada’s first year round water slide.” The slide operators offered family rates and party packages, and the attraction was no doubt popular among local families who could slap on their bathing suits in the dead of winter and enjoy a distinctly summery activity. Here is an ad we found in a publication called the The Canadian Champion for the water slides from 1984.

4) The Mandarin started in Brampton

If you love iconic Asian buffet joint the Mandarin, you might be happy to learn that the superbly popular restaurant got its start in Brampton. Mandarin’s roots are actually pretty modest, as the restaurant started off as a small a-la-carte restaurant in the city in 1979. Founded by James Chiu, Diana Chiu and K.C. Chang, the restaurant did not become a buffet until 1986. The resto’s corporate headquarters are still located in Brampton and are home to the head office, a warehouse, the Garden Banquet and Convention Centre and Mandarin Brampton.

3) Modern day Brampton was the site of three executions

In 1909, the Peel jail (which is now part of a historical museum) was the site of the execution of convicted killer Stefan Swyrda. Swyrda was found guilty of murdering a young migrant worker from Austria during what investigators believed was a robbery gone wrong.

On Feb 11, Swyryda was the first (but not the last) man hanged there. He was hanged at 8:00 a.m. and was pronounced dead 12 minutes from the time the lever was pulled. He died in front of 12 witnesses, including a priest who, according to a report by the Peel Art Gallery Museum and Archives, became hysterical and needed to be escorted away. The same documents also say that Swyryda told witnesses that he was not afraid to die and thanked officials for their kindness towards him. He told one man that someday the real murderer would be found and his name would be cleared. After Swyrda, two more executions took place–one in 1941 and another in 1946.

While Swyrda’s name has never been cleared, a Toronto Star article from 1996 reported that his body, which remained at the jail until the mid-90s, was reinterred at the Meadowvale Cemetery in Mississauga.

The now massive chain of Turtle Jacks restaurants actually started right here in Brampton. TJ’s first opened its doors at Ray Lawson and Hurontario in Brampton in 1992, and though the original location is now closed (it was where chef Ranveer Brar’s fine Indian dining restaurant, Mayura, now sits), the classic chain is a heavyweight in the arena for casual dining. The original location definitely had an even more casual, sports bar vibe. Fifteen years later, TJ’s has 16 locations in Southern Ontario, including one in Brampton on Airport.

1) Brampton was once the flower capital of Canada

In 1860, Edward Dale established a flower nursery and created the town’s newest industry, floriculture. Dale’s nursery became Brampton’s largest employer and Brampton became known as the “Flowertown of Canada,” with 140 greenhouses, producing 20 million blooms per year, and was the largest cut flower business in North America. By the turn of the century, hundreds of acres of land were lined with greenhouses growing diverse flowers in abundance for export markets around the world.

The term “Flower City” comes from Dale’s booming, international flower business that was based right here in good ol’ B-Town. Brampton might not be lined with greenhouses anymore, but flower gardens remain around the city, and Flower City retains its history.