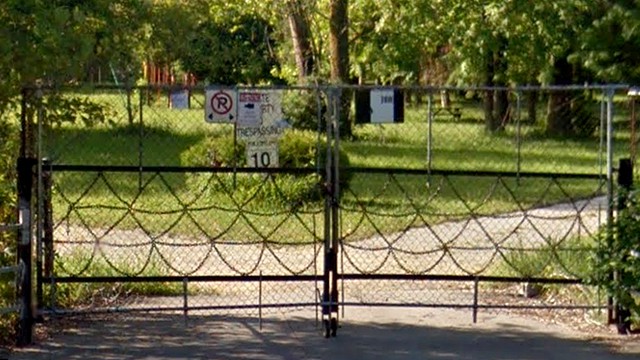 Correction: This story incorrectly insinuated that the Slovak Canadian Cultural Society might be a mythical village for little people. That myth has existed for some time and we intended the blurb to be a joke about the long-held misconception, but our intentions were not clearly expressed and therefore resulted in offense and confusion.
For that, we sincerely apologize.
The section on the organization has since been removed.
Please stay tuned to insauga.com for a full feature on the interesting and historical Slovak Canadian Cultural Society next month.

We at insauga take it upon ourselves to let people know what’s happening in Mississauga, whether it’s the latest restaurant, a new store or a weekend event.

But there are things in the city that I don’t think people are aware of.

Here are five random things in Mississauga that exist that people may not know about.

A Weapons Shop in Port Credit

Port Credit is known for being “Always On, Always Electric” and that includes a weapons store, right across the street from the office of the local Member of Provincial Parliament, and also Ontario’s Minister of Finance, Charles Sousa. 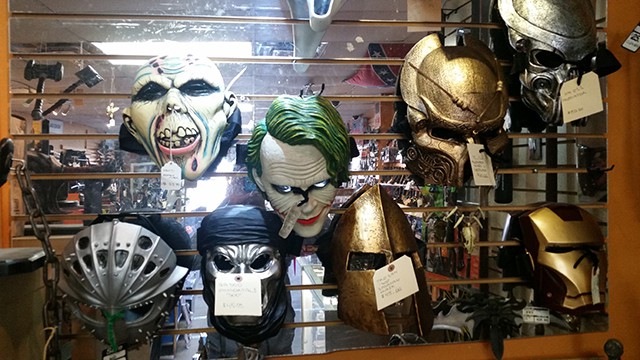 The guns they have are mainly non-lethal air guns, but nonetheless Blades 4 You has been in Port Credit since 2008. They sell a wide selection of legitimate swords, blades, knives, medieval hardware and other paraphernalia–some from anime and sci-fi programs and games like World of Warcraft. There is also an assortment of masks of characters like Predator and the Heath Ledger Joker, as well as a lot of Medieval knight helmets.

If you’re into exploring something in particular, need something to complete your cosplay outfit, or just need a switchblade for $5, then Blades 4 You is the place…for you.

Bed and Breakfast steps away from City Centre

You would not expect a bed and breakfast to be operating in a city like Mississauga. You expect them in little resort towns or smaller, picturesque communities. But to my surprise, there is a B&B in Mississauga in a quiet, tucked-away residential home near City Centre.

According to their website, All Seasons Bed and Breakfast has been operating for 38 years and, as you can see from their web page, they have some beautiful accommodations with a host of amenities. What really blows my mind is that this is happening inside a typical detached house on a typical Mississauga residential street. They provide detailed photos of the rooms available, and being right by City Centre, they mention nearby attractions such as Square One, the Living Arts Centre and Mississauga City Hall as well as the typical places in that little suburb called ‘Toronto’ (CN Tower, Theatre District and the ACC) for visitors to check out. They also mention restaurants in Mississauga but recommend you search the Internet as the selections are ‘overwhelming.’ I guess Insauga is doing its job! 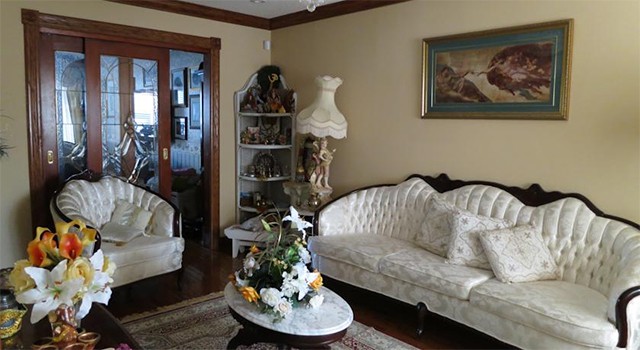 On a typical Saturday night, if you’re craving some bubble tea, it might be hard to find a place with space available for you and your entourage. Last week, I went to Sugar Marmalade, Chatime and Bubble Republic (my typical hangouts) and they were all jam packed. Those places might make you wait for a table, so may I recommend a very specific location? Presto Tea is a little heard about bubble tea place and they actually have a few locations around Mississauga, according to the locations page on their website. One location I noticed that is seemingly quiet these days, even on a Saturday night, is their location adjacent to the new northern Chinese cuisine restaurant Foodie North. 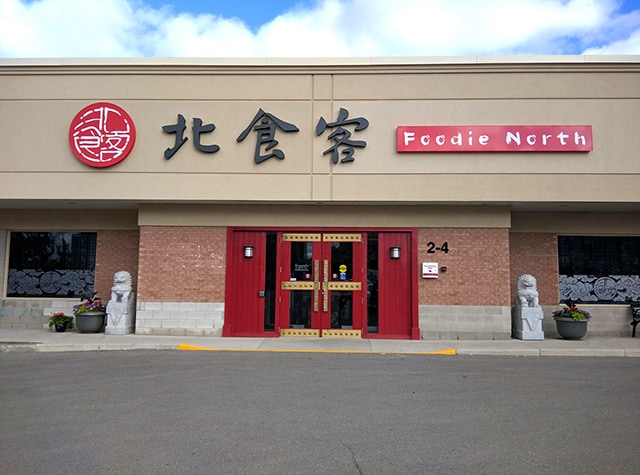 Insauga actually mentioned it in a review of Foodie North, known as Foodie North Express. Although they have these delicacies called Chinese Hamburgers, to me the atmosphere and environment is more suitable for sitting down to have a drink of bubble tea on a quiet afternoon or evening. They have free Wifi, but it’s safe to say you’d have to order something to stay there to use it. It isn’t like a Starbucks or Second Cup, you know!

I’ll admit it right now: I’m a fan and have been watching since 1996. These days, when people think of professional wrestling, they default to WWE. While WWE is indeed the global brand of professional wrestling, it’s the independent promotions around Canada and the United States where the big leagues find the next superstar. And it may surprise you to know that I personally have seen at least three independent wrestling promotions in Mississauga.

The first was Smash Wrestling, a mainly Toronto based promotion that conducted a show a few years ago in Mississauga, specifically at the Canlan Sportsplex. The ring was set up inside the building on the other side opposite from the volleyball courts, and it was a relatively entertaining spectacle for the affordable price of $20. The most memorable characters were a tag team called the Overdogs (as opposed to Underdogs, get it?), and they entered the ring drinking Somersby (don’t ask me to explain it; sometimes it’s just fun and doesn’t have to make sense). But of course, right now the place to be for local, home-grown professional wrestling in Mississauga is Battle Arts Academy.

Battle Arts Academy is a multi purpose training facility that was founded by Anthony Carelli, aka former WWE wrestler Santino Marella. After a colourful career in the WWE, he returned to his hometown of Mississauga in 2013 and not only started up Battle Arts Academy, but also the facility’s professional wrestler training program. The guys who train in Battle Arts form the core of Battle Arts Professional Wrestling, performing primarily out of the Don Kolov Arena at Tomken and Eglinton. But this summer, they went out and did two free exhibitions at Celebration Square, with our very own Khaled Iwamura being a competitor himself (Khaled competed in some matches for Battle Arts and he will tell you personally, there is nothing fake about the bumps and bruises you get from training for a wrestling match!). 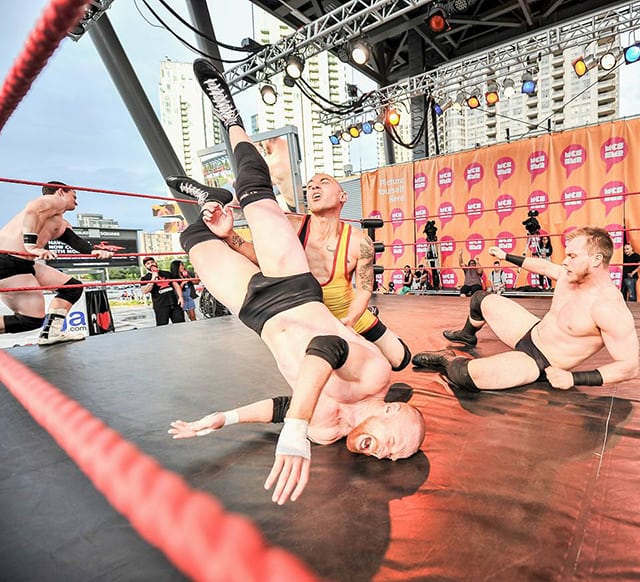 Also, I myself recently went to a couple of wrestling shows at Battle Arts for a small indy promotion called Destiny World Wrestling, which bills itself as the biggest independent wrestling company in Canada (don’t they all?). But the fact that the venue they host most of their shows in is owned by a former WWE performer does help draw some big names. Their last two shows drew some prominent names from WWE, with a former WWE wrestler recently winning the Destiny World Championship (I know it sounds cheesy, but that is literally what the championship title is called).

I could do a whole other article on professional wrestling in Mississauga, but all you need to know is that if you’re looking to indulge in some kind of showing of artistic creativity, then I would suggest you check out Battle Arts, Destiny, or any other promotions that are doing a show in Mississauga. Professional wrestling is as much performance art and stagecraft as it is athletic display. The combination of all those things makes it an art in and of itself that is worth exploring for a city looking to grow its art scene.

And One More Thing…

Finally, I thought I’d throw this in here, since we’re talking about things in Mississauga that people in Mississauga don’t know exist. This is pretty much the greatest example I can find of the contrast between nature and technology; a tree that grew itself around a piece of the oil mill that used to operate in this area (it’s near the little person village). It’s somewhere in the trees along the section of Culham Trail that connects the two Barbertown Roads (which are separated by the Credit River).

It’s a neat little piece of heritage in this community that is rapidly changing from its former agrarian past into a modern day city. 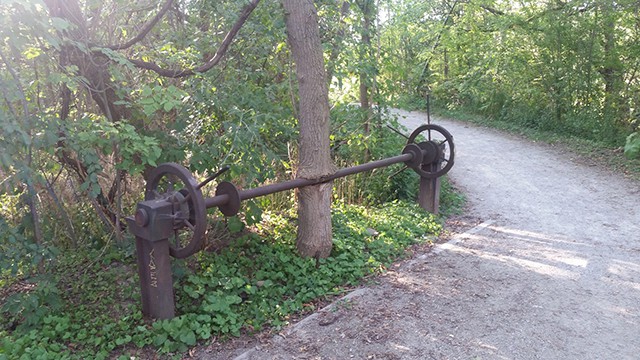