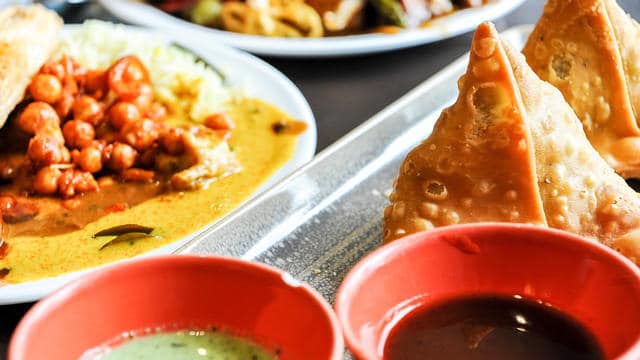 About two years ago, when I moved to Canada, my impression was that Canada’s extensive Indian community had taken good care of the Indian cuisine.

I’m well aware that Indian food outside of India mostly covers generic South Indian, Punjabi and Mughlai cuisines of India. At the very least, I wished that Chicken Tikka Masala wasn’t passed around as Indian food, which is a dish created in the U.K. (the Raj loved Indian curries and tried to recreate them when they left India).

I don’t claim to be an expert on Mumbai’s throbbing food scene but you’d have to live under a rock to not notice that Indian food is being rediscovered and better honed, across the globe.

Conde Nast Traveller India recently called Mumbai, India’s food capital, after all, the city has a lot to offer.

5) India’s regional cuisines
Mumbai’s food scene is seeing a shift for quite some time. Smaller communities and different regions of India, all eat differently. While the spices and ingredients might be similar, traditional dishes vary due to region, language, terrain, religion and availability of different produce. And, because Mumbai is a multicultural hub, you’ll find Litti Chokha from Bihar, Maharashtra’s Koli (fishing community) cuisine, Bengal’s mustard fish curries, Assam’s ant egg chutney and stir-fried silkworms, and a lot more. Regional cooking has seen a boom, thanks to Mumbai’s home cooks, who host meals at home and the city’s trendiest restaurant, The Bombay Canteen (TBC). Chef Thomas Zacharias of TBC has managed to make Indian produce and traditional dishes cool. The menu changes as per seasonal produce and the chef’s travels across the country. You’ll find food of different regions, brought under one roof. And, several seasonal specials celebrating items only found in India like Kalari cheese, cocktails with palm toddy from southern India and a variety of breads (there’s more than just naan and roti).

4) Pork is hip
When the Maharashtra province (of which Mumbai is the capital) banned beef, Mumbai chefs were obviously upset. So, chefs turned to pork. Goan chorizo, which is spicier compared to its Western counterparts and is flavoured with toddy vinegar, began to frequent on every menu. Bacon, pork belly and regional dishes like pork vindaloo, pork xacuti, sorpotel – all primarily from Goa began popping up on menus across Mumbai.
Thankfully, beef is now allowed to be imported from the West and from parts of India where cow and buffalo slaughter isn’t banned.

3) Desserts where east meets west
With modern Indian cuisine gaining popularity in India, chefs trained in French pastry have put out a plate full. Gulab Nut – a doughnut made with gulab jamun, filled with pistachio cream and dunked in an Indian brand of dark rum is Mumbai’s answer to New York’s cronuts and whatnot. Indians have a sweet tooth and a variety of traditional sweets that are unique in flavour and technique. Pastry chefs like Pooja Dhingra of Le 15 Pattisserie in Mumbai offers the usual vanilla and chocolate, but also masala chai, paan and chilli macarons. Some restaurants will offer Masala Chai ice-cream, Gulab Jamun Cheesecake, Jalebi Caviar, Ras Malai Tres Leches, Coconut Dosa with Madras Coffee ice-cream – you get the drift.

2) Street food is more than just Wada Pav and Chaat
Mississauga is also still missing out on a lot of Mumbai’s street food. Forget Pani Puri, Bhel Puri and the usual chaats you can score at any average Indian restaurant. Mumbai’s Frankies (wraps) have chicken tikka, chilly chicken, sweet-spicy chutneys and suit the grab-and-go life. And, while you may be familiar with the Bombay Sandwich, Mumbai also has Samosa Toast (a grilled sandwich with a samosa pressed in between!), Khichiya Pizza – a papadum of sorts, that’s topped with marinara sauce, veggies and loaded with cheese and roasted on a stove. By the beach in Mumbai, you can eat Tawa Pulav – a rice pilaf with lots of spices and veggies that has a distinct flavour and is cooked on a hot flat pan. And, for post-bar food, you’ll find the whole city thronging to Anda Bhurjee Pav shops that are open till the wee hours and dish out hot plates of scrambled eggs made with onions, tomato and spices and severed with a butter-slathered Pav (type of bun).

1) Indian Tapas and Indian-inspired Cocktails
If you’ve ever heard anyone call Mumbai, the city that never sleeps – it’s because people in Mumbai work hard and party harder. Thanks to a thriving bar scene that offers heady cocktails and gorgeous-looking plates of food, the partying hard bit comes easy. Chefs have turned their eye to local ingredients and are turning them into gorgeous-looking tapas and casual entrees. Indian flatbreads are transformed into tacos and are stuffed with Goan chorizo, curried paneer. You’ll find Dal Chawal (lentils and rice) Arancini, Ratatouille Gujiya (Indian pastry), Goan Corizo Baos, Curried Eggs, Ricotta and Paneer Kebabs, Pork Ribs cooked in Indian spices and so much more.
Cocktails too are seeing unexpected flavours: Indian mango pickle; Aam Panna (mango drink), Star anise and Kokam (type of fruit found along the western coast of India) among others.
Even Toronto-bred, Chef Kelvin Cheung is dishing out plates of American, Chinese, Korean and Indian-inspired elevated bar food and cocktails and has made his own space in the landscape.

What would you like to see in Mississauga from India’s food capital?