5 Things Hazel McCallion Wanted To Do in Mississauga

When Hazel McCallion was the mayor of Mississauga from 1978 to 2014, she ran Canada’s sixth largest city with such a charisma and personality that people can be forgiven if they thought that she had the power to do whatever she wanted. The truth of the matter is the municipal government structure Hazel operated under has not changed much from four decades ago. By definition, a mayor is only one vote among all members of council, and thus would require strong powers of persuasion and consensus building abilities to achieve her objectives.

Despite her overwhelming influence, there were certain things that Hazel wanted to accomplish that never came to fruition. In her own autobiography, Hazel refuted the notion that she always got what she wanted. It may be surprising to you, but there are some books written about Hazel’s time in office that can be referenced for such ideas that she had. Besides her own autobiography, there is another book written about her mayoralty by Cape Breton University professor Tom Urbaniak, and “The Shape of the Suburbs” a book about development in the GTA which was penned by former Toronto mayor John Sewell.

Here are five things Hazel McCallion attempted to do but did not succeed in doing in Mississauga.

Build the Hershey Centre on the Britannia Farms 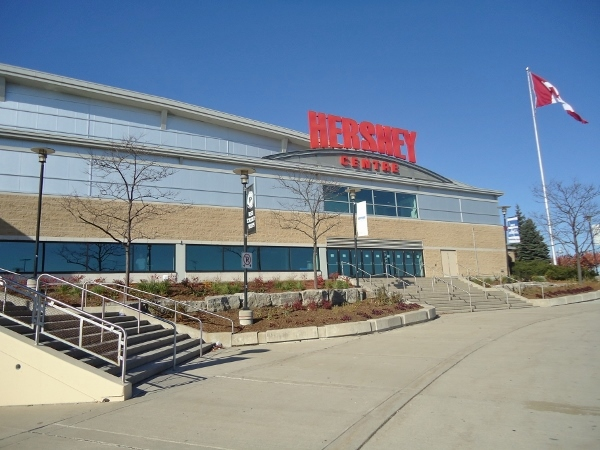 Some of you may have heard that the Britannia Farms land along Hurontario between Bristol Road and Matheson Boulevard is slated to become a multi purpose area with educational amenities and natural gardens. The Britannia Farms is one of the last pieces of property that harkens back to the agrarian past that was the foundation of Mississauga, and while some of it is to be developed for residential purposes, at least the majority of it will be kept in a state beneficial for the overall public.

But around 20 years ago Hazel had another plan in mind for this property that was also, in a way, to be beneficial for the city. In her own book, Hurricane Hazel: A Life with Purpose, Hazel wanted the Hershey Centre to be in the ‘downtown core’ of Mississauga, namely adjacent to Square One. She even offered the company who owned land near Square One a multi-tier parking lot in exchange for the company selling the City of Mississauga the land for the Hershey Centre.

When that plan fell through, Hazel tried to get the Hershey Centre built on the Britannia Farms, which was north of the downtown core but is owned by the Peel District School Board (PDSB). Since there were long range plans for a rapid transit line (aka the Hurontario LRT) running up Hurontario right past the school board lands, she thought it only made sense to put a sporting facility in that area, and doing it would have spurred the construction of light rail much sooner than in 2018.

What prevented this from happening was that the PDSB owned the land, not the city. This was during the heyday of the 1990s and the development bug was still going gangbusters in Mississauga. The PDSB held onto that land and still own it but now is working with various stakeholders to bring to fruition the current plan for the Britannia Farms. In hindsight, it was fortunate that they did as it protected an agricultural and natural oasis deep inside Mississauga from falling victim to the allures of suburban sprawl.

Expand the boundaries of Streetsville to stop amalgamation into Mississauga

Long before she became Mayor of Mississauga, Hazel McCallion cut her political teeth in local politics in Streetsville. Streetsville was an independent village/town until 1974 when it was amalgamated into the City of Mississauga along with Port Credit, the Town of Mississauga, as well as various pockets of farmland. As the last person to hold the office of Mayor of Streetsville, Hazel oversaw a quaint little village just west of Toronto, the kind of place people during the post war years were looking towards settling down in to start families. 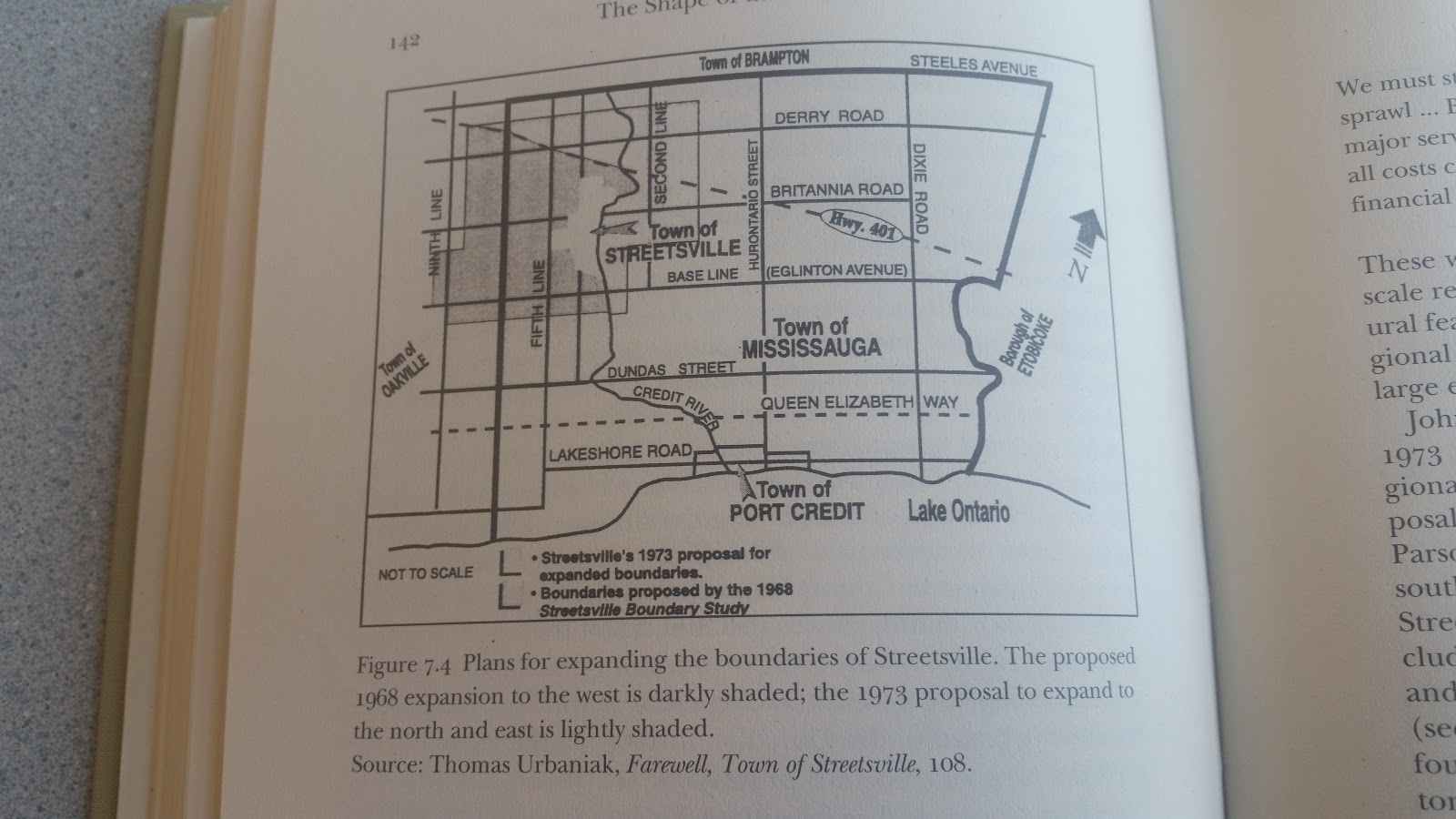 From ‘The Shape of the Suburbs’ by John Sewell, showing a proposed plan to expand the Town of Streetsville’s borders along northwestern section of present day Mississauga

Hazel McCallion wanted to preserve the independence of Streetsville, but would you have thought she considered increasing the size of Streetsville an option? The following details are gleaned from Sewell’s book about a plan that Hazel spearheaded in her time as mayor of Streetsville to expand its boundaries throughout northwestern Mississauga.

In 1968, Streetsville was a town of approximately 12,000 people. The town undertook what was known as a boundary study, recommending that Streetsville’s boundaries should be expanded north, south and west to incorporate what would later become Erin Mills. Hazel obtained support from Streetsville council to annex 10,000 adjacent acres (7,000 from Mississauga and 3,000 from Oakville) to give life to the boundary study. The Town of Mississauga then responded by applying to annex Streetsville, and there was more back and forth as Hazel applied to annex more land from the Town of Mississauga.

Which brings me to another idea that Hazel had been pushing for a long time, but never quite succeeded in getting done…

Taking Mississauga out of Peel Region

The idea of taking Mississauga out of Peel Region as we have previously documented is not a new idea. Mayor Bonnie Crombie’s current statements on the issue in fact echo the ideas about regional government long held by her predecessor. Hazel stated this in the exit interview below, reflecting on her time in office and her specific views regarding Peel Region:

After she was reelected to her ninth term in 2000, Hazel formed a Citizens Task Force and launched her own campaign for Mississauga to become ‘an independent city’. In the months that followed Hazel had this survey sent to every household in the city asking residents to endorse Mississauga’s position. The campaign was even accompanied by a clever slogan: “One City, One Voice”, and included various statistics, answers to questions and a timeline on what occurred up to the year 2004.

In the book by Professor Tom Urbaniak about Hazel’s time as mayor of Mississauga, only around 20,000 surveys were returned as completed and 99 per cent of the respondents agreed with the idea of separating Mississauga from Peel Region. But although there was such ‘strong backing’ that the mayor could take to the province, the Liberals who just got elected in the early 2000s were not really in the mood to do any further municipal government restructuring, and some minor rejigging of representation on Peel Regional Council was implemented to continue giving Mississauga the plurality of seats.

Whether Mississauga and Brampton will ever become single-tier, “independent” cities as Hazel McCallion has always envisioned is, at the present time, still a pipe dream at best and perhaps only something for municipal governing experts to jabber over their afternoon tea with each other.

Attempts to Rein in the Airport Authority

Recently, it was announced that Hazel was to be appointed to be on the Board of Directors of the Greater Toronto Airport Authority (GTAA). Perhaps now she can revive one of her pet projects regarding the airport; that since technically Pearson is within the boundaries of the city she long reigned over, that it should be called “Mississauga International Airport.”

All joking aside, it’s somewhat ironic she agreed to take on this role, because Hazel’s past views of the GTAA were anything but positive. According to Urbaniak, Hazel took the GTAA to court during the 1990s to pay the development charges of a $4.4 billion expansion.

“The airport should not be a city within a city,” she said at the time. Mississauga finally lost the court case in 2001. Later on, the GTAA attempted to block the City of Mississauga from converting land around Meadowvale Village from industrial to residential, fearing the future residents of that area would complain about airplane noises. In subsequent instances, the GTAA refused to submit blueprints regarding location of hazardous materials to the Mississauga fire department, or submit its projects to the city for building permits.

The legacy of Hazel’s inability to rein in the excesses of the GTAA still linger today, as outlined in one of my previous articles regarding residents’ concerns expressed at recent public meetings about the proposed Pearson expansion undertaken by the GTAA. No wonder why the former mayor has mused that the airport should have just been privatized in the first place.

There have been recent musings of a possible hotel tax coming to Mississauga, but an idea like this is nothing new. In her autobiography, Hazel mentioned that while municipalities do not have the power to charge such a tax, they are allowed to ask for it but there is no legislative authority from the province to enforce it. Hotels just opt out of any municipal tax for their customer.

Hazel also compared the way American hotels charge their customers, noting how brilliant it was in how they used a hotel tax to raise revenue for the hotel’s presiding city. It was astonishing in her view that when you look at the hotel receipt, you can see all the fees that go to each U.S. city that was charging for each visitor, and she wondered why they weren’t doing the same in Canadian municipalities.

Currently only the City of Toronto by way of the City of Toronto Act that allows them to implement new taxes (aka ‘revenue tools’), can bring in a hotel tax should they so choose, but even that would still require provincial approval. Mississauga and other surrounding municipalities do not have such powers, hence only rely on property taxes and user fees to fund local services.

So this is just a ‘brief’ list of interesting ideas that Mississauga’s former long serving mayor had in mind that just didn’t come to fruition. Some of them may sound like good ideas, while others may make you cringe at the very thought. But no one can accuse Hazel of being boring or not contentious.

There will never be another one like her indeed.

A west coast burger joint just opened in Mississauga
We're of the opinion that you can't have too many good burger joints, so we will happily welcome popular burger spots to the city.
END_OF_DOCUMENT_TOKEN_TO_BE_REPLACED