Some Incredible Women of Mississauga 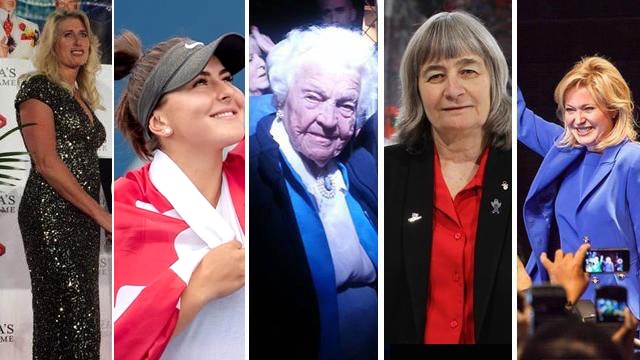 Today is International Women’s Day, a day dedicated to the social, economic, political and cultural achievements of the women around us. Today, we take the time to celebrate all of the women in our lives and all of the things they have done to get us where we are now, whether the achievements were big or small.

To celebrate this day, we’ve come up with some incredible Mississauga women who have bridged the gender gap and proved how valuable women are in our city. It was actually quite challenging to put the list together because, fortunately, Mississauga has so many incredible women to choose from. The city has long been governed by female mayors (first Hazel, now Crombie) and boasts six female councillors and close to 20 female directors and influential female MPPs.

As for our list, some women have made headway in traditionally male arenas such as politics, sports and literature.

Here’s a look at some of Mississauga’s most notable women (and the women who have made an impact on Mississauga).

Although Mona Awad isn’t quite as famous as, say, Hazel McCallion (who is?), she’s actually an incredibly talented author whose recent novel, 13 Ways of Looking at a Fat Girl, was shortlisted for a prestigious Scotiabank Giller Prize. The book also won the Amazon.ca First Novel Award. The biting, funny and poignant memoir-style novel is spectacular and more than worth a read. We actually wrote quite a bit about it here. The novel is partially set in Mississauga, the city where Awad was raised, and even opens in the McDonald’s at Burnhamthorpe and Wolfedale. The 42-year-old novelist studied literature at York University, Brown University and the University of Denver. Her work has been published in The Walrus, St. Petersburg Review and Maisonneuve. Fran Rider was one of the founders of the Ontario Women’s Hockey Association and has proven herself to be quite a powerhouse in the sports industry in Ontario. She was the first female recipient of the Canadian Amateur Hockey Association’s Award of Merit; the first woman to receive the Ontario Hockey Association’s Minor Hockey Service Award and was inducted into the Mississauga Sports Hall of Fame and the International Ice Hockey Federation Hall of Fame. Her contributions have helped shape the world of women’s hockey. Mississauga inducted Fran into Legend’s Row in 2015, a relatively new but prestigious ceremony and award that honours the contributions of well-known people who live in or are from the city. Canadian champion rower Silken Laumann was born in Toronto Township, now a geographic township in Mississauga. She has made a name for herself winning numerous awards and medals, including two gold medals in single sculls rowing at the Pan Am Games, and a gold medal in quadruple sculls at the U.S. championships. In May of 1992, just as the Olympic Games approached, she was injured in a rowing accident that shattered her right leg. Though she was told by doctors she may never row again, after a mere 27 days and five operations, she was back at it and in August of the same year, she won the bronze medal for Canada. More than being an olympian, Silken is now an author and an inspirational speaker and is a symbol of strength and hope. Mississauga inducted Silken into Legend’s Row in 2014. Since being elected in 2014, Mayor Bonnie Crombie has made a splash in Mississauga. Before becoming mayor, she was a Liberal Member of Parliament for the riding of Mississauga–Streetsville from 2008-2011. She was also a councillor for Ward 5 from 2011-2014. Her endorsement from our beloved Hazel McCallion may have helped secure her title, but her achievements since then have spoken for themselves — including, but certainly not limited to, her aim to tackle poverty and homelessness, her international strategies and her management of other social and political issues. This list couldn’t possibly exist without a nod to our former mayor, Hazel McCallion. Anyone born and raised in Mississauga during her reign knows the depths of her eminence. Many will argue that no one could have run the city better. No one was quite ready to see her leave office in 2014, but her continued appearances around the city give us our fill of the legend. She has received countless honours and eponyms over the years. Whether or not you agree or disagree with her policies, you can’t deny that she was a larger-than-life force that propelled our city from a small bedroom community to a thriving semi-urban area. She wasn’t perfect, but she was formidable. She was a strong and determined female leader who ruled for over 30 years. That says something. Mississauga tennis phenom Bianca Andreescu recently had an electric year on the WTA tour. In 2019, Andreescu saw her WTA ranking skyrocket into the top five in the world. Her rapid ascent was a result of Premier titles at Indian Wells and Rogers Cup as well as a Grand Slam title at the U.S. Open. Andreescu is the only Canadian in the Open Era, male or female, to win a Grand Slam singles title and the youngest Grand Slam champion since 2004. She capped off a memorable year with two more prestigious awards – the 2019 Lou Marsh Trophy for Canada’s top athlete of the year and the WTA Newcomer of the Year award. Andreescu’s U.S. Open win also prompted the creation of the She The North Rally at Celebration Square in Mississauga. The September 2019 event attracted thousands, including Prime Minister Justin Trudeau. In December 2019, Bianca Andreescu was also named Canadian Press female athlete of the year.