5 old school arcades and pool halls of Mississauga’s past 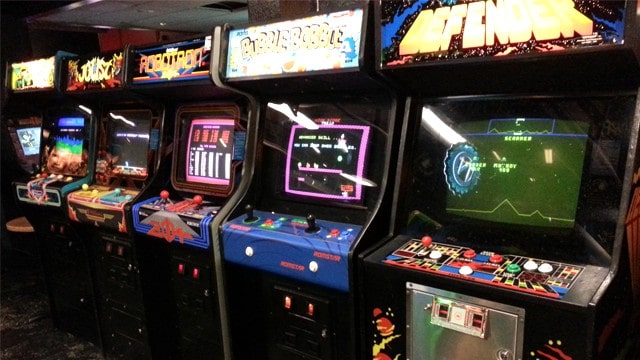 Back in the early 90s arcades and pool halls were the place to be in Mississauga.

Whether it was a late night game of pool on the weekends or for a high school lunch session at an arcade to play Street Fighter or a game of Gitz, Mississauga had some good choices.

Here are some of the arcades and pool halls of Mississauga’s past:

Wizard’s Castle was one of the only franchise arcades, therefore it was the place that got video games first. It was located where Meadowvale Town Centre currently stands. The franchise lasted until the mid-90s and had locations throughout Canada. If you went to Our Lady of Mount Carmel or Meadowvale High School, you probably dropped a bunch of quarters in the video games there.

Located in a plaza on Dundas between Cawthra and Dixie was an arcade and pool hall called Gold Tips. This place was more packed in the evenings, as it wasn’t super close to any high school like Mickey’s and Silver Tips. The arcade games like Out Run and Gitz were in the front and the pool tables were in the back and you would see all the Applewood students come after school to toss all their quarters away

Located in a plaza south of Dundas on HWY 10 where the new Shoppers Drug Mart now stands was Silver Tips. I remember this being a smoky place in the mid-90s. It was located underground, so you had to walk down a flight of stairs to get there. When you first entered, there were pool tables to the left where the older kids played snooker. Directly ahead was a square room that housed all the arcade games and the Gitz table. This was the kind of place that toughened you up. TLK students would go here for lunch if they were going to skip a class, since it took a little longer to walk there than Mickey’s.

I remember going here in the mid 90s. When you walked in, the smoke was so thick you could cut it with a knife. ESC has been operating since 1989 and has seen a lot of changes. This place was mainly a pool hall with about 30 tables and an arcade with a Gitz table tucked away in the corner. It was actually really nice, as they offered everything from live music in the Lost Lounge to a bar to watch sports to food. This place outlasted most of its counterparts, but folded in the late 2000s.

I remember waking Henry to open this place up! Mickey’s has been around since the 80s and was a bowling alley before it became a pool hall. Before my time and into the early 90s, it had a full-blown pool hall in the back with about 12 tables and the best arcade in the front. You would find all the classics, such as Street Fighter, Mortal Kombat, WWF Wrestfest, NBA JAM, SuperSprint and a jukebox that played Nirvana and Cypress Hill. Of course, everyone was there for Gitz. Anyone remember bringing the metal ruler? This place had eight tables going and all of them were filled with quarters. When someone scored, the quarters would fall off.