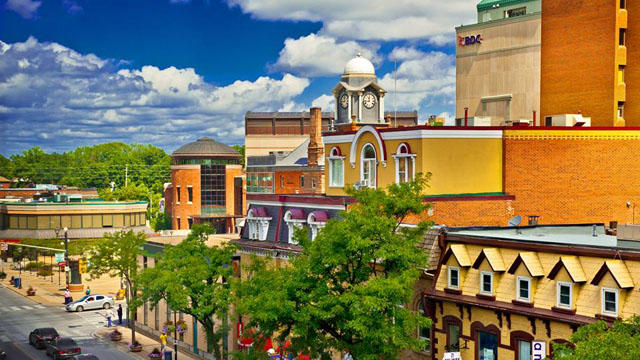 Every year, people promise themselves they’ll turn over a new leaf at the beginning of the next calendar year. They say they’ll be thinner, wealthier and and more motivated. Sometimes they just promise to be a little more patient and kind.

Regardless of the nature of the resolutions we make, most of us kinda/sorta make one and since we’re promising to be better versions of ourselves, it only makes sense for cities to do the same.

So, here are five New Year’s resolutions that the City of Brampton might want to consider for 2018.

5) City Council should try its best to get along more swimmingly, and increase transparency

There was a huge issue in 2017 where Peel Police were called in to investigate a million dollar slush fund from 2009-2014 among the city’s senior staff behind City Councillors’ backs. While police found that there was actually no slush fund and therefore no criminal offence to begin with, there was a subsequent movement to hire an internal auditor to increase transparency from the City in case of these issues. To what extent that might have helped is unknown because Council eventually decided against the movement, but the vote was pretty secretive. Council’s activities — while meetings agendas, minutes, and now even Youtube videos, are posted online — could use a big dose of transparency, which would increase trust between residents and Brampton’s municipal leaders

It’s no secret that Brampton’s Councillors don’t all get along. Last year, Mayor Linda Jeffrey even went so far as to indicate that she prefers all council members work out of the same floor in the City Hall building. The move raised some eyebrows, since Council members have had public spats over joint Twitter accounts that disappeared and the thorny issue of exempting taxi drivers from English proficiency tests. Since the Mayor publicly encouraged unity by physically putting councillors together on one floor, it’s clear that there’s still a lot of work to be done when it comes to Councillors getting along — those kinds of spats and tensions don’t just disappear in a year.

4) Decide on that Mega Mall

Not too long ago, we wrote about the proposed Osmington mega mall that’s equal parts controversial and exciting. For those who don’t know, the mall plan calls for a mixed-use development consisting of approximately 111,485 square metres (that’s 1.2 million square feet) of retail/commercial floor space (the aforementioned regional shopping center), approximately 13,007 square metres (140,000 square feet) of additional retail/commercial floor space, a movie theatre, a hotel, apartments, natural heritage system areas and stormwater management ponds. While the city has helped the process move along as smoothly as possible (other legal battles stand in the development’s way), council was supposed to make a recommendation on Phase 2 of the application in 2017. Here’s hoping the recommendation comes in 2018 so people know whether or not they should be getting excited about a massive new development.

The City of Brampton recently announced that the provincial update on the plan for the Ryerson-Sheridan partnership university that’s set to be built somewhere in downtown Brampton in the coming years has been delayed from the end of 2017 to “early in 2018.” While this is the province’s responsibility, perhaps the City should commit to ensuring residents get timely information on the big details — this is an incredibly exciting time for Brampton. That being said, there are several big details we’re waiting on, including a exact location, programming, economic and social impact, growing the number of students to a sustainable level, and collaboration with new businesses, and other partners.

The university will be a whopping $150 million investment for a post-secondary facility and a community space for joint-use to support a university, business innovation and collaboration, community interaction and cultural growth. In terms of provincial support, the province is spending $180 million on post-secondary institutions in both Brampton and Milton, which the report details as a “starting point” for provincial investment. More details are to come on provincial investment, as the province has expressed a keen interest in developing this new institution. So, there’s a chance Ontario will invest more — how much more, however, is also a salient detail we’re waiting on.

While many suburbanites are fearful of the 905 condo explosion, they shouldn’t be. The GTHA (Greater Toronto and Hamilton Area) is exploding and immense population growth is expected over the next decade. The growing popularity of the Toronto satellite cities should encourage places like Brampton to embrace intensification and start building up rather than out. As of now, low-rise (detached, semi and town) homes have never been pricier, so condos are becoming a more viable option for long-term family living. Condos also come equipped (usually, at least) with built-in amenities and they take up less green space than sprawling low-rise subdivisions. They’re also attractive to new Canadians and young professionals.

Since Brampton is Canada’s ninth largest city, it should be open to more high-rise developments. Who knows — maybe the city will one day welcome its own curvaceous, skyline defining structure.

Brampton has no shortage of festivals. The city is home to seasonal celebrations (Canada Day, Christmas, New Year’s Eve, etc) and a smattering of distinct events exclusive to the city. All that said, it would be great to see Brampton start a festival that’s uniquely its own—something people will travel to. At present, the festivals attract people from the geographic area. CeleBrampton is a great festival to get residents outside and engaged, but it needs something like Taste of the Danforth or the Beaches Jazz Festival, festivals that people journey miles to get to. Like we’ve said before, Brampton is Canada’s ninth largest city and one of its most diverse. It could host a world class samosa or multi-cultural music festival that would truly generate buzz and excitement. In fact, a signature food festival would most certainly boost the city’s evolving profile–especially if it comes with some live music and artisanal retail opportunities.

Perhaps the city will up its festival game in 2018?