4th Sauga Slam Goes Off Without a Hitch! 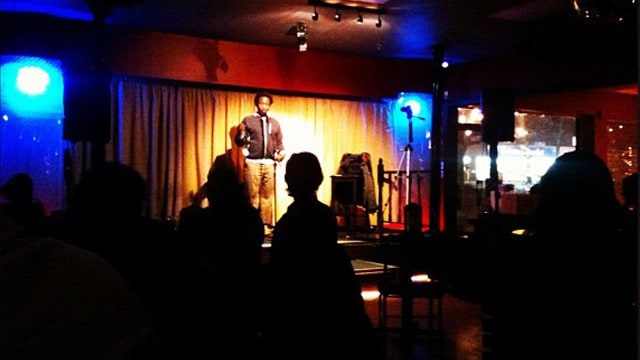 Ever get slammed to the floor? Well if you attended the Mississauga Poetry Slam, which was held Tuesday Feb. 28, then I’m sure you would have.

The night, which was hosted by “Teddy” Aksel, started with eight amazing poets from Mississauga, Burlington and Toronto, performing at Naughty Nadz. Though most were newbies, some performing for the first time ever, all seemed to be at home while on stage. First to take a hold of the mic was the co-founder of the event Lip Balm a.k.a. Matt Miller. He performed a piece about suburban life, which he said, “Is very Mississauga”. To make it even more worthwhile, each slam has a feature artist to come and share their best material with the crowd. Greg “Ritallin” Frankson, who has been performing for eight and half years, graced attendees with his spoken words. Miller had asked Frankson to perform, not only for his amazing poetry, but also because he does a Black History Month set. Ritallin, who brings a hip-hop style to his words, hopes that this can one day be his career. Though he attends slams across the country and in the US, he enjoys Mississauga as, “it’s a new scene, which has lots of energy”. He believes that because Miller has made this a free event it has helped build a strong spoken word community within the Mississauga area, as anyone can participate. As such, Frankson thinks that the Sauga will be a big part of the national movement in poetry slamming. Though this was the 4th slam for Mississauga, it was the second slam of the season. Each competition is held on the last Tuesday of each month, with the last slam being held in May. From there the top ten point holders will compete in the finals for four spots to represent Mississauga’s first ever poetry slam team. Points are given to the top five of each event with first place gaining five points and last place gaining one point.

As for the Feb. 28 slam, the highlight of the night had to be winner Tomy Bewick’s performances. Bewick, who is the founder of the Burlington Poetry Slam, spoke about slamming and how it changed his life after leaving Alcoholics Anonymous. The passion and precision in every word that he speaks moves mountains, or in this case tables and chairs. It was no wonder that Bewick got a near perfect score of 59.9/60.

Other highlights of the evening included Abdul Jabbar a 19-year-old native of Mississauga who was youngest performer of the night as well as the fifth place winner. Jabbar is not new to the slamming scene, as he has performed for the Center for Youth Development and Mentoring Services and the York Youth Collation. As to whether he will perform in next month’s slam is still undecided, he is a poet to look out for. A personal favorite was fourth place winner Knowledge Gonzalez, a Brampton native, who lost out to third place winner Lip Balm by 0.01 points. Though this was Gonzalez’s first poetry slam ever, he is no stranger to the stage. Having over fourteen songs recorded Gonzalez’s sees slamming as a continuation of his music. Slamming is a way for him to express his words and for people to hear their meaning. Overall the night seemed to go off without a hitch. Even with serious issues being raised by all poets, the night was filled with laughter, good food, lots of drinks, memories and thoughts to last a long time.