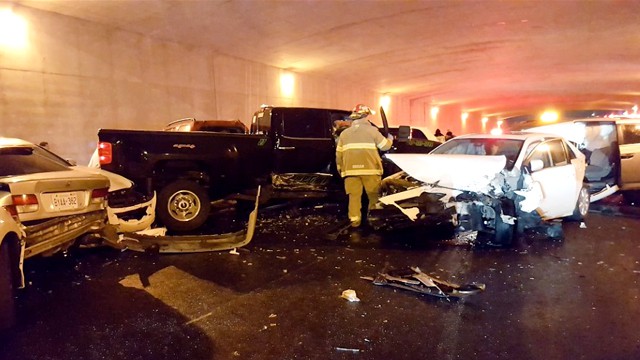 It is unconfirmed but there can be up to 40 vehicles involved in this collision according to the OPP.

Ornge Ambulance is on it’s way to assist with the injured.

410 southbound will be closed at Derry it’s reporting.

Peel police are asking drivers to stay off the 410.

15 patients transported to local hospital following a multi vehicle pile up on the ramp from Highway 410 southbound at Derry Road. #onstorm pic.twitter.com/JBRDkK7Wo4

Approximately 30 vehicles including tow trucks in collision on the offramp from Hwy 410 southbound to Derry Rd. Minor injuries. #onstorm pic.twitter.com/h9QWlaSrGK

15 people have been transported to local hospitals with minor injuries from the 410 at Derry. https://t.co/jf515poHhr

Serious 40 car collision on #Hwy410 SB at Derry…officers responding along with @Ornge https://t.co/vcpQ8CA2a6

At this time @BramptonFireES is asking people to avoid 410. Multiple MVCs. Minor injuries. Crews working with @Peel_Paramedics to clear.