Hamilton Police say they have made more than two dozen arrests, recovered $1.6 million in illicit drugs and laid over 200 charges while investigating an organized vehicle theft ring dubbed Project Grizzly.

The investigation was launched last month and took place at various locations in the Hamilton and Niagara Region. All told, 28 people have been arrested and 19 stolen vehicles have been recovered. A large amount of illicit drugs and two loaded firearms were also recovered.

The recovered drugs, whose street value is estimated at $1.6 million, include 13.6 kg of cocaine and 45 grams of methamphetamine. 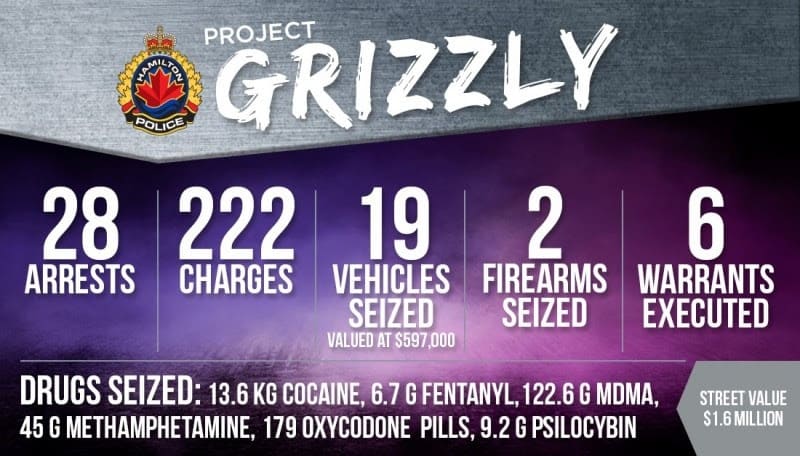 The Equite Association estimates auto thefts cost Canadians close to $1 billion yearly. Most of that includes costs for insurance companies to fix or replace stolen vehicles. About $250 million is comprised by police, health care and court system costs, along with millions more for correctional services.

The Project Grizzly investigation is ongoing, if you have any information that you believe could assist police with the investigation into this crime, you are asked to contact Det. Sean Woodard (905-546-3820) or acting Det.-Sgt. George Gallant (905-540-5085).

Information may be provided anonymous though Crime Stoppers (1-800-222-8477, or crimestoppershamilton.com).