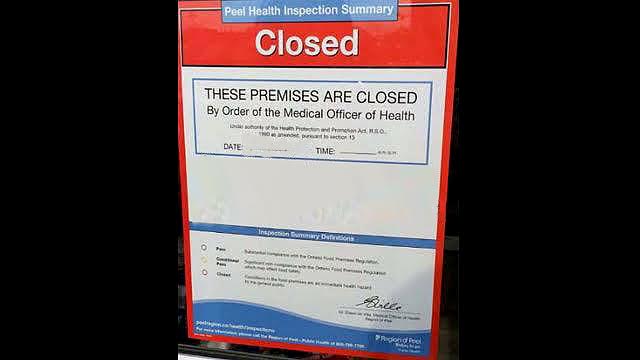 When you eat out in Mississauga, you hope the kitchen isn’t teeming with cockroaches and that your food is being stored at the correct temperatures.

While most restaurants maintain clean environments, mistakes happen and sometimes creepy crawlers end up in kitchens and milk sits on a counter a little longer than it should.

Well that all sounds terribly unpleasant, that’s what routine Region of Peel health inspections are for.

This year, the Region closed four restaurants in Mississauga for violations of the Ontario Health Protection and Promotion Act (all of which have re-opened and passed follow-up inspections).

So, was this a big year for health violations?

“Not a particularly big year, no” says Paul Callanan, director of environmental health with the Region of Peel. “Cockroach and rodent infestations are relatively rare, we don’t close many premises. There were about 16 closures out of approx 10,000 inspections last year, for example.”

In order for a restaurant to be shut down, it has to be guilty of substantial violations.

“We have green, yellow and red signs posted at entrances to establishments,” Callanan explains. “If it’s red, it’s closed and you can’t get in. Yellow means a conditional pass and green means it’s satisfactory.”

If a restaurant or other foodservice operation receives a conditional pass, inspectors return within 72 hours with the expectation that the issues have been resolved.

Typically, businesses that receive conditional passes are storing some foods at the wrong temperature.

If a restaurant receives a red designation, it will be closed completely until the problems are resolved.

“Red means a lot of food isn’t kept at the proper temperature or there’s obvious food contamination. It will also be used if there’s an obvious cockroach or rodent infestation.

While one might assume that a passably clean establishment won’t attract cockroaches or other pests, that’s not entirely true. Cockroaches are insidious and, according to Mississauga Pest Control Services, can thrive in very clean environments. They’re known as a structural pest and are common in restaurants–just as they’re common in houses, condos and apartment buildings.

Since they’re anything but rare, restaurant operators have to practice constant diligence and avoid overlooking simple things like leaving damp cardboard out.

“Avoid leaving out wet cardboard,” says Callanan. “Cockroaches can eat pretty much anything, so it’s important to make sure the food premises is thoroughly cleaned at the end of the day and not only at the beginning. There should be no grease, crumbs or cardboard.”

The fact that closures are rare is encouraging and probably has a lot to do with the fact that most restaurant staff are familiar with regulations and expectations. The information is readily available and easy to find.

“There’s a regulation that our staff enforces called Ontario Regulation 562 – Food Premises. It’s under the Health Protection and Promotion Act and it outlines expectations. Anybody in the business of operating food premises should know the basics of the regulation. Regulations specify regular criteria for sanitation. I don’t think there needs to be more education, it’s not difficult to find the rules and we have materials that people can find on our website.”

Interestingly enough, regulations are chiefly concerned with foodborne illness and health impacts–a restaurant with a dirty washroom or dusty tables probably won’t merit as much concern from the Region.

“We’re most concerned about direct impacts on foodborne illness. If customers choose to go into a place with a dirty bathroom, that’s a personal choice. A lot of people evaluate the quality based on sanitation of public areas, but that may not reflect the back of the house.”

As for what restaurateurs need to do to ensure regulations are abided by, Callanan says organization and preparation are key.

“If you’re serving large number people, it can be difficult to keep foods at the right temperature, so be really organized and anticipate demand.People should feel safe, that’s why we do our job.”

Mississauga restaurants that temporarily closed in 2016:

All the restos that were closed have since reopened.