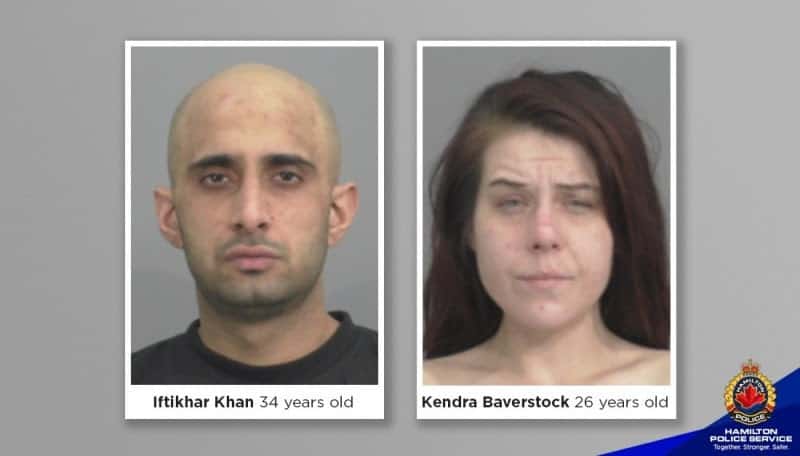 Two people who allegedly trafficked a woman in the sex trade in Hamilton last summer are in custody and face a slew of charges. Additional alleged victims of the accused pair are also being encouraged to come forward to the police.

Hamilton Police (HPS) say that Iftikhar Khan, who resides in Québec, and Kendra Baverstock, an Ontario resident, were located in Trenton, Ont., last Thursday (Jan. 19) and were arrested by officers from the OPP (Ontario Provincial Police). They have been held pending a bail hearing.

An investigation began in September when, per HPS, a female disclosed to the Hamilton Police that she was trafficked in the sex trade between July and August.

“Through investigation, the suspects were identified as Iftikhar Khan and Kendra Baverstock,” HPS stated on Tuesday (Jan. 24). “All of the money earned throughout the trafficking was turned over to the suspects.

“Hamilton Police believe there are additional victims, and encourage them to come forward to police.”

Anyone who is a victim or has information pertaining to this investigation should call Det.-Const. Kudo Park (905-546-3845) in the HPS Vice and Human Trafficking Unit.

The police added that support is available within Hamilton for people who have experienced human trafficking, or know someone who has experienced it. Connections to ongoing supports may be obtained by reaching out to Victim Services (905-546-4904; available 24 hours a day).

Information about this or any other open criminal investigation may be provided through Crime Stoppers (1-800-222-8477; online at crimestoppershamilton.com).

A media release by HPS added the city’s geographical location creates a hotbed of human traffic. Two major highways, the Queen Elizabeth Way and Hwy. 403, run through the city.

“Human Trafficking continues to be an issue in Hamilton, due to easy accessibility along the 400 series highways, which are key pipelines for traffickers,” the police noted.

None of the accusations against the two people arrested have been proven in court.

Baverstock, age 26, is charged with: