15 things you should never recycle in Mississauga 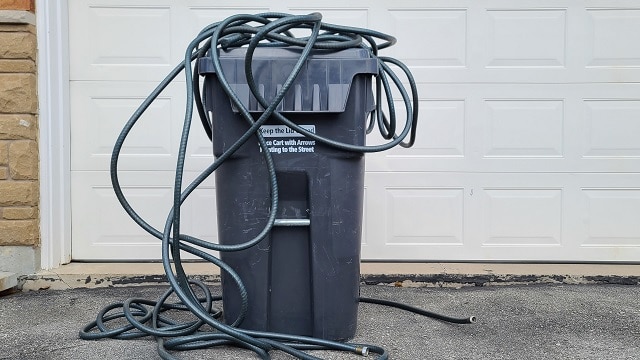 Everyone wants to feel good about their efforts to recycle, and it’s no surprise why. Recycling, when done right, is one of the most effective ways you can reduce waste, save money, and make a positive impact on the environment.

But recycling isn’t always as easy as it seems. It’s not just about tossing stuff into the blue bin and forgetting about it – you gotta know what you’re tossing and how to properly dispose of it. Is Styrofoam recyclable? What about batteries?

Luckily for Mississauga residents, there’s an easy way to solve the mysteries of recycling. Download RBC Ventures’ GarbageDay app, an ultra-convenient tool for everything related to waste management. The app is available to download now on Apple and Android devices.

Get weekly reminders for garbage, recycling and more. GarbageDay allows you to set reminders for when to put your garbage on the curb and which bin needs to be put out each week. But that’s not all: The app also provides a wealth of information on a variety of important topics (recycling included) via the GarbageDay Blog.

There’s a lot you might not know about recycling! Here are 15 things you should never throw in the recycling in Mississauga:

1. Food or anything with food residue.

This should go without saying, but anything with food involved can’t be recycled, as the residue get soaked up by paper and can ruin large batches of perfectly fine recyclables. Make sure to empty and rinse any food containers before tossing them in the blue bin. That goes for those greasy pizza boxes too! While Peel Region does accept empty pizza boxes for recycling, greasy pizza boxes should be washed first or just thrown into the green bin. You can also cut off the clean top of the box for recycling and throw the grease-soaked bottom into the green bin.

Don’t try to recycle that coffee cup from McDonald’s, Tim Hortons or Starbucks. Most hot cups are lined with plastic, which makes them difficult to sort mechanically at the recycling facility, and the colour in the paper also makes it difficult to turn cups into other paper-based products.

Batteries actually CAN be recycled, but it’s a more of a process since you can’t just toss them in the blue bin. During the twice-a-year Mississauga battery collection period (which is happening this month!), you can gather your used single-use batteries in a transparent, sealable bag and place the bag on top of your closed organics cart for curbside pickup. For the rest of the year, you can take batteries to a Peel Community Recycling Centre location, a participating Orange Drop retailer, or drop single-use batteries into battery recycling barrels at participating libraries, community centres, municipal facilities and retailers throughout Mississauga. The GarbageDay blog has more info on how to recycle batteries properly.

4. Electronics such as computers, phones, TVs and monitors.

Electronics dominate our modern lives, which is why it’s all the more important to recycle them properly. Anything electronic can’t be placed in the blue bin, but they can be taken to a Peel recycling centre.

Light bulbs are generally considered household hazardous waste. Compact fluorescent light bulbs (CFLs) may contain mercury, a toxic heavy metal that can negatively impact the environment. For your own safety, don’t try to remove the mercury – just take your bulbs to a Peel recycling centre.

Clothes get outgrown or worn out over time, so it’s natural that people are getting rid of old clothes all the time. Unfortunately, clothing (including shoes) doesn’t go in the recycling. If you’re not willing to throw them out, a good alternative is to take them to a thrift shop or leave them in one of the donation boxes around the city.

A bit of an extension from the last point, but textiles of any kind aren’t recyclable. That includes blankets, curtains, carpets, towels, etc.

Anything made from ceramics can’t be recycled but can be taken to a Peel recycling centre. That includes common kitchen items such as dishes and cups, and bathroom fixtures like toilets and sinks.

We already mentioned food, but even the cleanest potato chip bags or candy/granola bar wrappers won’t recycle – flexible plastic packaging is generally made from a lot of different layers of materials, some of which are non-recyclable. It’s usually a safe bet to just throw these out.

What do all of these items have in common? They’re very lengthy and tend to get tangled up, which can cause damage and make a huge mess during the recycling process. You’re better off either donating them or throwing them out.

In our increasingly digital world, VHS tapes are a thing of the past. However, you may still have a few in storage somewhere. Just like the previous items, VHS tapes will likely get tangled and make a mess, so if you’re trying to get rid of those old tapes it’s better to donate them or throw them out.

12. Black plastic containers with food waste or other garbage.

While black plastic items (such as takeout trays and containers) are accepted by Peel’s recycling program, it’s important to make sure they’re fully clean and empty before putting them in the blue bin. Peel recommends removing any paper sleeves or instruction sheets and placing them separately in your recycling cart or recycling bag. You should also remove and throw out any caps, absorbent pads, foil covers, plastic seals, stoppers, and filters.

Bad news for some of the coffee lovers out there: Coffee pods (single-serve coffee containers) aren’t recyclable, to the point that the inventor of the coffee pod, John Sylvan, regrets having created such a wasteful item. You can check with your coffee pod dealer to see if your pods can be recycled through the manufacturer.

As the “hazardous” part implies, these items are toxic to the environment and no good for recycling. However, household hazardous waste can be dropped off (in limited amounts) at a Peel recycling centre.

This one is most relevant to all the new moms and dads out there. You obviously shouldn’t recycle a dirty diaper, but you might be surprised to know that even clean, unused diapers still shouldn’t be thrown in the blue bin. That’s because they’re made of multiple non-recyclable materials.

On the other hand, here’s a brief list of what you CAN toss into the recycle bin:

The GarbageDay blog offers more info about which waste products go with which garbage bin colours.

Proper recycling isn’t just important because it can save you money and help Peel meet its goal of reducing the negative impact of waste. Currently, contaminated recycling is costing the city millions annually – according to GarbageDay, one third of stuff that’s put into the blue bin doesn’t belong there!

Be warned that the city is taking this matter seriously. They’re inspecting blue bins and tagging those who are recycling incorrectly, so do your part and don’t get tagged!

Eager to learn more? Download the app for garbage and recycling reminders, and to get plenty of tips and tricks on how to recycle effectively. You can also visit the GarbageDay Blog for helpful articles such as 5 Sustainable Living Tips for 2021.