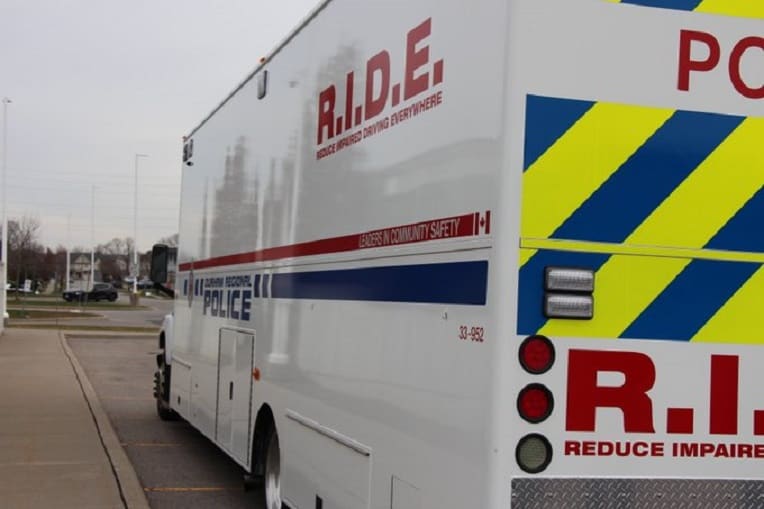 Durham Regional Police have charged 14 drivers with impaired driving during the first week of their festive RIDE program.

Durham Police kicked off their annual Festive RIDE on November 19. The program sees officers out at traffic stops in every municipality but Brock Township to stop drivers and take breath samples.

In the first week on the streets, Durham’s cops stopped 1,755 drivers across all seven municipalities. This is up from 2021’s first-week total of 1,463.

Out of all the stops so far this year, police demanded a breath test from 117 drivers, well above last year’s total of 40. These tests resulted in 12 “warn” readings on the breathalyzer double the 2021 rate of six.

Three drivers in the “warn” range were novice drivers and received license suspensions between three and 30 days. Four novice drivers had their licenses suspended in the same timeframe last year.

However, Highway Traffic Act (HTA) violations were the biggest jump. Last year police issued 74 such charges, but in 2022 that number leapt to 159, a 114 per cent increase.

Last week Durham police also joined forces with the Ministry of Transportation and the OPP to conduct a RIDE stop at the Whitby truck scales. Police were “pleased to announce” that no commercial drivers blew over.

However, a woman in a passenger car wound up in line and caught an impaired charge. In total 14 drivers were found to be impaired, down one from 2021.

The charged drivers include;

Anyone charged with driving impaired automatically loses their license for 90 days and their vehicle for a week. The Durham RIDE program continues through the holidays for eight weeks.