A Mississauga student achieved his goal to get an orange shirt to every student and staff member in his school.

The inspiration for Orange Shirt Day came from Phyllis Webstad, a member of the Stswecem’c Xgat’tem First Nation in B.C. When Webstad was sent to residential school in Williams Lake, B.C. at six years old, she was stripped of her clothes, including a beloved, new orange shirt her grandmother bought her. She never got it back.

After Webstad shared her story in 2013, the orange shirt became a symbol of how the residential school system took away the Indigenous identity of its students.

Keegan heard about the day on the news in 2015 and wondered why no one at his school participated.

“He would question his teachers: ‘Why aren’t you wearing an orange shirt? Why aren’t we doing orange shirt day?'” says Covey-McDonald.

Keegan’s father is from the Aamjiinwaang First Nations in what is now Sarnia, and Keegan has always felt proud of his ancestry.

“I think everyone should know what has happened to the residential survivors,” he says. “And they should really know their story.” 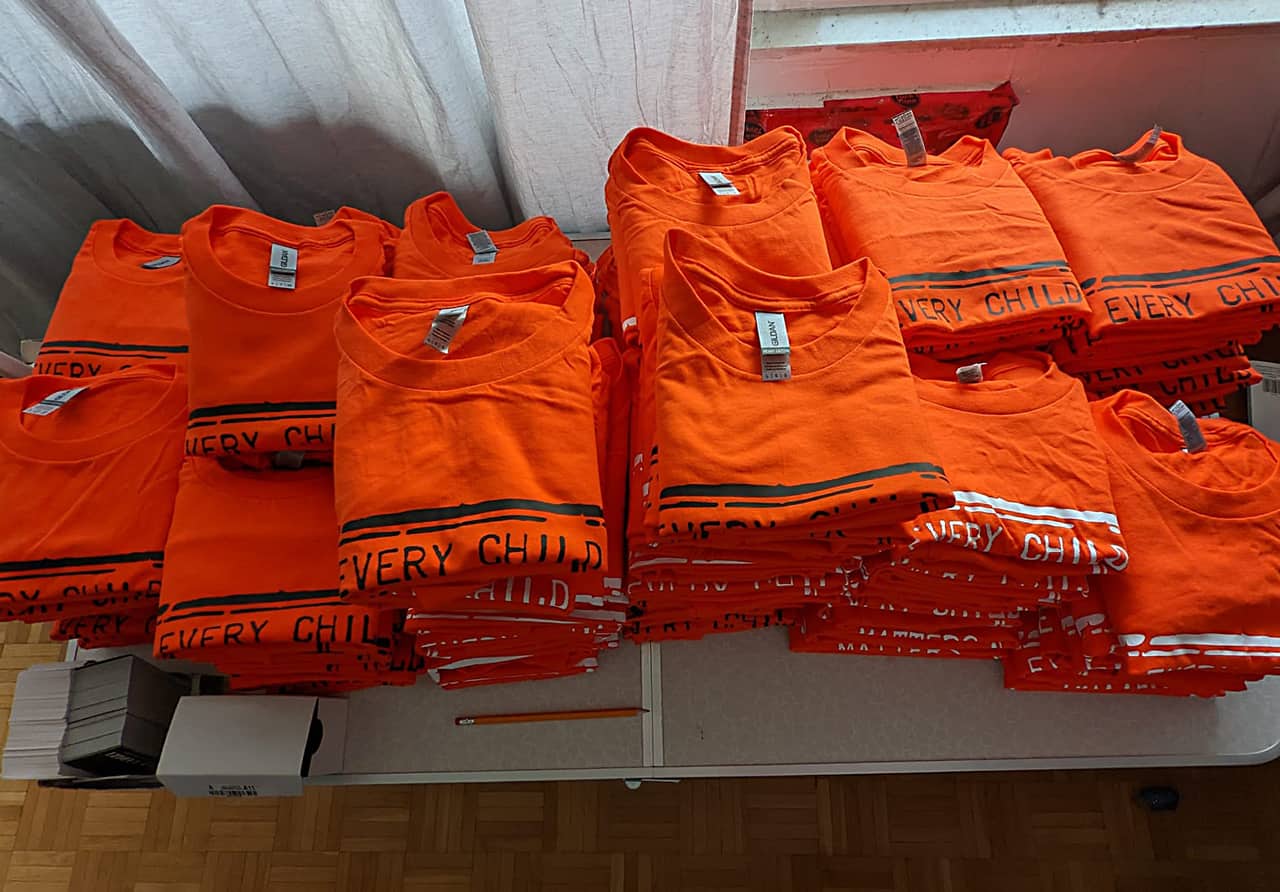 It became important for Keegan to raise awareness.

“It’s just been like a really big passion of mine,” says Keegan. “Because the schools weren’t doing it.”

He started raising awareness in Grade 4 by making and selling orange bracelets, then moved on to orange pens and seeded bookmarks. But it has been his goal since Grade 2 to get shirts to everyone in the school.

Now in Grade 8, his final year at Hillside, Keegan wanted to make sure he made enough shirts so every staff member and student could wear one. After a lot of hard work with raffles and other fundraisers, he is successful — sending 677 of his shirts to Hillside.

Keegan designed the shirts, cut the vinyl transfers and peeled them, getting them ready for pressing. Then, Covey-McDonald, who has a t-shirt business, pressed them.

“We really did everything over the summer, Keegan put in 90 working hours making these shirts.”

Keegan looks forward to everyone wearing his orange shirts on Friday (Sept. 30).

“It is definitely going to feel good,” he says.

There are a few of Keegan’s shirts left for sale. For more information, visit Keegan’s Orange Shirt Day Fundraiser on Facebook or email [email protected] Proceeds from the sale of shirts go to the Native Men’s Residence in Toronto and the Gord Downie and Chanie Wenjack Fund.