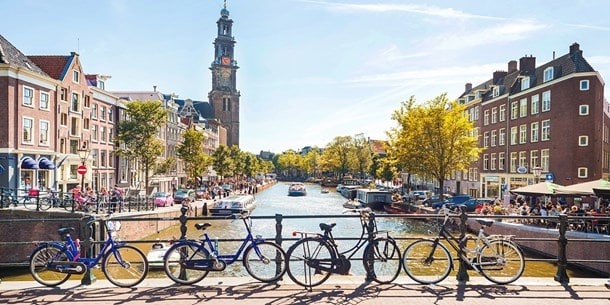 With summer on the horizon, Mississaugans are hunting for the best travel deals to explore cultures, hike across beautiful landscapes, and even get their tan on.

The top 10 trending summer destinations for Canadian travellers according to KAYAK are:

10. New York, NY – 49 percent increase in searches
The Big Apple just south of the border is great for an urban explorer, with tons of restaurants, cafes, shopping centres, tourist attractions, and a nightlife to enjoy.

9. Seattle, Washington – 50 percent increase in searches
This seaport city boasts nature – mountains, water, parklands, and evergreens – and a city vibe. Check out the famous Space Needle, and perhaps even catch a Seahawks game!

8. Amsterdam, Netherlands – 52 percent increase in searches
Known for its heritage, canal system, and relaxed culture, Amsterdam is historic and enjoyable. Tourists can browse the Van Gogh Museum, check out the city’s nightlife, and cycle across the city on bike paths.

7. Barcelona, Spain – 52 percent increase in searches
Eat churros galore, party at a few festivals, and practice your Spanish in Barcelona. Visitors can scope out the city’s famous landmarks like the Sagrada Familia, and pretty much all of the Gaudi architecture.

6. Denpasar, Indonesia – 57 percent increase in searches
The hub of Bali, Denpasar is on the southern part of the island, where tourists can lounge on beaches, embrace a new culture, see a gorgeous sunrise, and boast a tan.

5. Ho Chi Minh City, Vietnam – 57 percent increase in searches
A hub for culture and commerce, Ho Chi Minh City is one of the wallet-friendly destinations on this list, known for cultural landmarks like the Notre-Dame Cathedral and a 19th century post office, as well as bustling street food markets.

4. Athens, Greece – 75 increase in searches
Athens is a classic destination for some quality time in the sun with historical landmarks like the Parthenon. Don’t forget to have some gyros!

1. Lisbon, Portugal – 126 percent increase in searches
Portugal’s capital city is hilly and coastal, where Canadians can check out the old city and its pastel buildings, see the Ponte 25 de Abril suspension bridge, and soak up some sun near the Atlantic.

Based on this data, travelling around Canada does not seem to be top-of-mind for Canadians.

Europe seems like the place to be, with places like Amsterdam and Barcelona seeing a huge hike in search rates.

With the Canadian dollar not as strong as it once was, it comes as no surprise that budget-friendly destinations like Ho Chi Minh City, Lima, and San Jose made the list, all of which are on the cheaper end of trips, and have seen a price drop in airfare compared to last year, according to KAYAK.

For those travellers aiming for a budget-friendly trip, the least expensive time to travel is typically during the last week of August, but booking sooner often means better deals and guaranteed seats.

Finding a hotel deal by waiting until the last minute to book is also easier on the wallet for travellers who are willing to take that chance, except on busy holiday weekends or in cities with limited inventory, when booking last minute could mean not being able to book at all.

Perhaps Canadians travelling to one of KAYAK’s top ten trending destinations will meet other Canadians!

Regardless, travellers will definitely score an abundance of pictures for the ‘gram.